As Scott Morrison pivots his climate policy towards embracing a target of net zero emissions by 2050, he is seeking to distinguish the government from “inner city” types 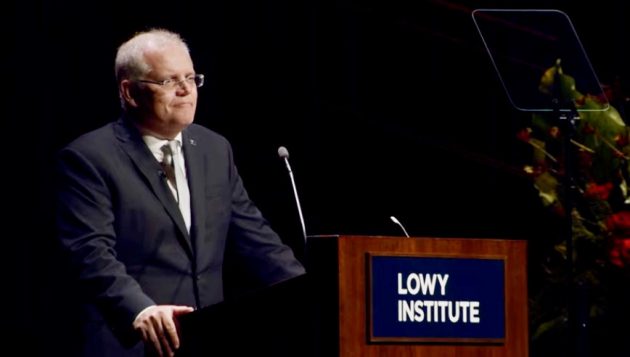 As Scott Morrison gradually pivots his climate policy towards embracing a target of net zero emissions by 2050, he is seeking to distinguish the government from “inner city” types and political opponents who’ve been marching down that road for a long time.

The Prime Minister told a Business Council of Australia dinner on Monday the government was charting its own course “to ensure Australia is well placed to prosper through the great energy transition of our time, consistent with strong action on climate change”.

“The key to meeting our climate change ambitions is commercialisation of low emissions technology,” he said.

“We are going to meet our ambitions with the smartest minds, the best technology and the animal spirits of capitalism.”

Morrison was speaking ahead of this week’s two-day virtual summit on climate called by President Biden.

The Biden administration has made the issue a major policy priority, which has increased the pressure on Australia to sign up to the 2050 target before the Glasgow meeting on climate late in the year.

Morrison acknowledged that “we need to change our energy mix over the next 30 years on the road to net zero emissions”.

But he said “we will not achieve net zero in the cafes, dinner parties and wine bars of our inner cities.

“It will not be achieved by taxing our industries that provide livelihoods for millions of Australians off the planet, as our political opponents sort to do, when they were given the chance.

“It will be achieved by the pioneering entrepreneurialism and innovation of Australia’s industrial workhorses, farmers and scientists.

“It will be won in places like the Pilbara, the Hunter, Gladstone, Portland, Whyalla, Bell Bay, and the Riverina.

“In the factories of our regional towns and outer suburbs. In the labs of our best research institutes and scientists.

“This is where the road to net zero is being paved in Australia. And those industries and all who work in them, will reap the benefits of the changes they are making and pioneering.”

Morrison said Australia’s natural resources and its industries’ strength presented “a huge opportunity to capitalise on the new energy economy”.

“And let’s not forget that Australia already produces many of the products that will be in growing demand as part of a low carbon future – from copper to lithium.

“It is this practical approach of making new technologies commercial that will see us achieve our goals.”

“Our domestic emissions have already fallen by 36% from 2005 levels.

“One in four rooftops has solar, more than anywhere else in the world.

“Australia takes our emission reductions targets very seriously. We don’t make them lightly. We prepare our plan to achieve them and we follow through.”