Migrant workers were blamed for spreading COVID-19, which despite public education attempts, has provoked increased racism. 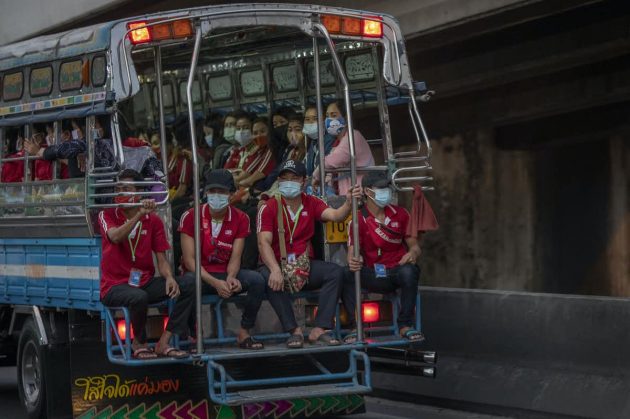 Migrant workers travel after work in a back of a bus in Samut Sakhon, south of Bangkok, Thailand, Jan. 4, 2021. (AP Photo/Gemunu Amarasinghe)

Many public health researchers have looked to the Asia-Pacific region, including countries like Thailand, for lessons on successful pandemic management. These countries have demonstrated how it is possible to minimize community spread and thus also reduce the need for lockdowns. However, recent COVID-19 outbreaks in Thailand and nearby countries also offer warnings about what not to do.

Canada and the United States would do well to consider these lessons in how they address public health among migrant worker communities.

In Thailand, as well as Malaysia and Singapore, major outbreaks have been concentrated among migrant workers. Policy responses, though varied, have included discriminatory actions against migrant workers including attempts to segregate them from the rest of the population. These policies have not worked well, and they have increased racism towards migrants.

Migrant workers blamed for outbreaks
An estimated 400,000 migrants work in Thailand’s seafood processing sector in the province of Samut Sakhorn. Thailand produces approximately 40 per cent of global canned tuna, as well as frozen shrimp and other seafood products.

The majority of these workers are from Myanmar. The workers live in crowded housing, and speak very little Thai.

Most migrant workers are in Thailand with temporary work permits, but an unknown number do not have valid permits. The closed border with Myanmar combined with the complex and prohibitively expensive process for renewing work permits within Thailand mean that the number of workers without full documentation has likely increased during the past year.

Prior to the pandemic, provincial health staff in Samut Sakhorn were proactive in reaching out to migrant workers, regardless of legal status. They offered services and information in Burmese, and employed hundreds of Burmese health volunteers to work with migrant communities.

Provincial hospitals in Samut Sakhorn extended this outreach during the recent outbreak, for example, by employing migrant volunteers in the field hospitals that were set up for COVID-19 patients.

The potential benefits of this outreach, however, were undermined by restrictive and discriminatory policies towards migrant workers.

Discriminatory containment policies
At the beginning of the outbreak, Thai Prime Minister Prayut Chan-o-cha claimed in a televised address that the virus was brought into Thailand by workers sneaking across the Myanmar border. NGOs countered that Thai government officials were involved in the rampant illegal smuggling of workers from Myanmar.

Prime Minister Prayut’s statement is an example of how migrant workers were blamed for spreading COVID-19, which despite public education attempts, has provoked increased anti-Burmese racism toward this already marginalized community. The result is that health care suffers as migrants become more reluctant to access testing and health care.

Fatal mistakes
At the beginning of the outbreak, the government tried to limit community spread by forcing migrants working near the wholesale shrimp market to quarantine in dormitories, lumping together infected and uninfected workers. In another outright discriminatory policy, it quickly imposed an interprovincial travel ban for migrant workers in Samut Sakhorn, while Thais could still travel in and out of this province if they applied for a permit.

By January 2021, COVID-19 cases were appearing in many provinces, often traced to travel by Thais infected with the coronavirus. The government responded with a strict lockdown in the most affected areas, and imposed a ban on travel by migrant workers, with limited exceptions. Thais were allowed to travel for essential purposes.

Thankfully, the general lockdown slowed community transmission, and public health authorities scaled back testing in Samut Sakhorn factories. However, the virus is still spreading among both migrants and Thais, mostly in Samut Sakhorn but with pockets appearing elsewhere.

Malaysia
Another example comes from Malaysia, which had been lauded as one of the most successful countries in containing the pandemic. In October, a major wave of infections appeared among the millions of temporary migrants working in factories, construction, and other essential sectors.

Of particular note, as widely reported in local and international news media, are the unhealthy working conditions and outbreaks among migrant workers in rubber glove factories, which have flourished during the pandemic as global demand for PPE shot up.

The Malaysian federal government responded to the spread of the virus by confining migrant workers in working and living facilities, often behind barbed wire.

These policies did not stop the spread of the virus. By January, daily new cases had reached more than 5,000. The government responded by declaring a state of emergency and a lockdown. New positive tests are just starting to decline.

Lessons
The stories of COVID-19 outbreaks among migrant worker communities, and of discriminatory and segregationist policy responses, is not limited to Thailand and Malaysia. Singapore is much the same. These cases illustrate how racism toward migrant workers, combined with crowded living and working conditions, can undermine pandemic management.

As important, these stories show that segregation and containment of migrant workers does not work to contain the virus. Instead, these approaches facilitated transmission among migrants, which inevitably spread to the broader population.

To avoid the mistakes seen in this region, an immediate pandemic management goal in Canada would be to stop discriminatory and segregationist practices for example, confining agricultural workers to farm premises. More broadly, there would be public health and equity benefits to providing all people who do not have full legal status but who often perform essential work with access to permanent legal status on an equal footing with citizens.