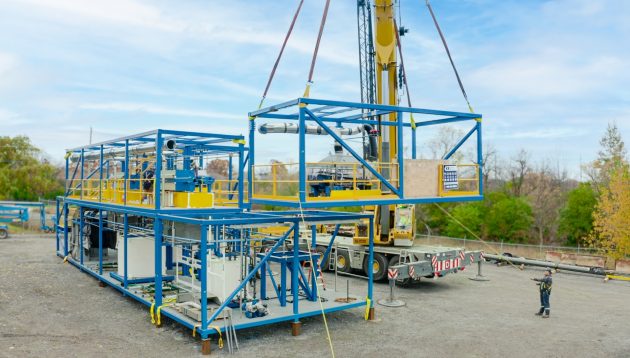 Construction is underway on Li-Cycle’s spoke facility in Rochester, NY.

On Feb. 16, Li-Cycle Corp. announced that Peridot Acquisition Corp. had entered into a business combination agreement with them. The news comes following a year where Li-Cycle Corp. was named to the 2021 Global Cleantech 100 list, a recognition only afforded to 10 other Canadian companies. Li-Cycle was recognized for its efforts around reducing greenhouse gas emissions and climate impact through a commercially viable business plan.

Li-Cycle Corp. employs Spoke & Hub technology to break down end-of-life batteries into basic materials so they can be put back into the supply chain. When the batteries are broken down, black mass, which contains the high value cobalt, nickel and lithium energy source is processed through hub facilities and re-entered into batteries.

Kunal Phalpher was excited to discuss the merger and what it meant for Li-Cycle in 2021.

“We’re aiming at a global expansion, and the merger will allow us to do that. It provides a significant cash flow so we can open commercial hubs in Europe and China as well. That’s the next big project. We’re hoping to have our commercial hubs in China and Europe up and running by 2022.” Phalpher said.

Currently, the company operates two commercial hubs, one in Rochester, NY and one in Kingston, ON, and it was clear to Kunal how commercially viable the technology was.

“We don’t just want to be focused on end-of-life EV batteries either. It’s clear that there’s a lot of black mass and materials being wasted in the manufacturing process that we can recover as well. We’re already working with some major automotive OEMs near our two commercial hubs and we’re seeing interest from a lot of parties because they see how significant the savings are. Roughly 40% of the total black mass can be extracted from end-of-life EV batteries.”

The other numbers were just as eye opening. Li-Cycle boasts a 95% recycling efficiency rate compared to around 50% efficiency of their competitors, and a KPMG survey revealed that 70% of Canadians said that their next vehicle purchase would be an electric one.

As Li-Cycle prepares to go public, the EV market continues to grow in 2021, refuting the idea that it is a fleeting trend.