Across the board, Latin Americans earned less than the average Canadian; this produces unequal economic conditions, and can make coming to, and working in Canada more difficult. 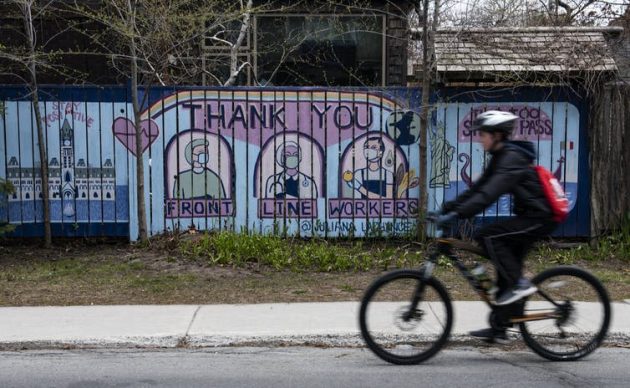 A cyclist passes a mural painted by artist Juliana LaChance thanking front-line workers for their efforts during the COVID-19 pandemic in Ottawa. THE CANADIAN PRESS/Justin Tang

Latinos constitute a mosaic of nationalities and cultures, and there are one million of them living in Canada.

Just over 92,000 Latinos were admitted as permanent residents to Canada between January 2007 and April 2021 — with Brazilians, Mexicans, Colombians and Venezuelans topping the list.

Because of limited research on this ethnic group, we know little about Latin Americans’ experiences with economic integration in Canada. Economic integration, in this context, refers to the extent and degree that immigrants and refugees integrate into the workforce, stimulating the local economy.

Through our most recent exploratory research and drawing from 2016 census data, we analyzed how well Latinos are doing in terms of economic integration.

We found that while they are present across all Canadian labour markets, they are lagging behind the Canadian median total income ($68,100). This is because their field of employment, location and income are strongly shaped by their nationality, time spent (or having been born) in Canada and their gender.

Latinos and the labour market

Our research found that Latinos’ participation across the Canadian labour market varies. For example, 22 per cent of Latinos work in sales and services while five per cent work in health-related fields.

Their significant participation in front-line jobs has increased their health-related risks during the pandemic. Latinos are seven times more likely to be hospitalized with COVID-19 than any other ethno-racial group in Toronto. They also have the second highest mortality rate among immigrant communities affected by COVID-19 in Canada.

Gender plays a major role in which industry Latino men and women work. For instance, while nearly one in five women work in business, only one in 10 men do.

There are also significantly more Latino women in the field of education (16 per cent), with numerous nationalities represented — Nicaraguans, Peruvians, Chileans, Colombians, Costa Ricans, Brazilians, Argentinians and Bolivians. Only eight per cent of men work in this field, particularly Salvadorian, Chileans and Cubans.

Time spent or having been born in Canada also shapes where Latinos work. Among men, Salvadorians, Venezuelans, Chileans and Cubans who have been in Canada between five and 14 years often work in fields that require more education.

More Latino women than men have achieved important employment-related advancements. This has been done by obtaining jobs that require more education. However, not all Latin American groups have obtained this degree of economic integration. And when Latina women work in fields that demand more education, their income does not reflect that — this is something that requires attention.

Across the board, Latin Americans earned less than the average Canadian. This produces unequal economic conditions, and can make coming to, and working in Canada more difficult.

Immigrants’ labour force has become indispensable due to aging demographics. By evaluating Latinos’ economic integration, we can assess the degree to which they are allowed to and further contribute to the Canadian economy.

It is important to consider, however, that immigrants’ and refugees’ international credentials and experience are usually not recognized in Canada. For this reason, Latinos’ income may not reflect their skills, knowledge and experience.

In order to reach economic parity with the average Canadian, Latino workers have to overcome multiple barriers. These include accent and language obstacles, professional accreditation issues, discriminatory hiring processes and the effect of gender.

The relationship between immigrants’ and refugees’ education, experience and economic integration matters. It can tell us whether Latinos are unemployed or underemployed or contributing to the Canadian economy. It can also highlight areas for improvement, and whether specific sectors of the labour force require additional support.