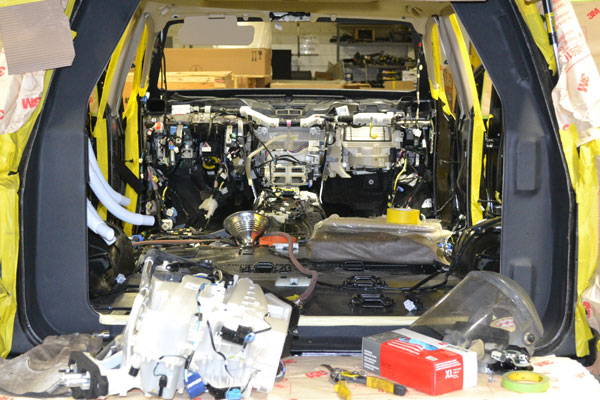 The team at INKAS reverse-engineers every vehicle it retrofits when adding bullet- and blast-proofing specifications. PHOTO Dan Ilika

TORONTO—There’s a factory like no other in Toronto’s north end.

Still under construction and slated for completion this fall, its unfinished facade and parking lot render it barely worthy of a second glance.

But step inside and it’s easy to see what makes the INKAS Armored Vehicle Manufacturing facility—or more specifically what rolls out its doors—so special.

The scene inside the unmarked building in the Weston Road and Finch Street West area of Toronto lies in stark contrast to its raw and unfinished exterior.

From the stacks of ballistic steel to the rows of luxury SUVs in varying forms of completion, there’s a sense of quality and craftsmanship that hovers above the shop floor like a cloud of welding fumes.

Approach the first area of the shop, where pre-teardown inspection takes place, and you will find everything from Mercedes-Benz Sprinter vans to Toyota Camry sedans waiting patiently for their impressive retrofits.

The vehicles in the back of the shop, where the quality control team completes its final inspections before shipment, look an awful lot like they did when they rolled in through the front door.

It’s somewhere in between that the INKAS team applies its craft, completely overhauling everything from the pedestrian to the posh for clients from around the world.

And much like the INKAS facility itself, it’s what’s on the inside that counts.

Inside its Toronto facility, the company still builds both, not to mention behemoth armoured personnel carriers (APCs) for military and law enforcement services the world over.

The shop floor at INKAS is a busy place, crawling with dozens of fabricators—some of whom hold master’s degrees and doctorates—reverse-engineering virtually every body panel to seamlessly rebuild a bulletproof alter ego of each vehicle’s former self.

Suspended above the shop floor, not far from a pair of massive Bystronic pressbrakes that deliver enough force to bend ballistic steel at 90° angles, is a mezzanine office that houses INKAS’ design and engineering team.

It’s a fitting place for the 10-member team, which has a hand in each and every vehicle that rolls out of the plant.

Whether it’s an armoured prisoner transfer van for a police force or a fully customized, six-door luxury SUV for a client with more money than a small country, the design and engineering team will spend weeks—and sometimes months—toiling away at the intricacies of each vehicle to maximize space and safety.

Unlike other retrofitters that rely on a roster of in-house designs they apply and adapt for a given vehicle, INKAS designers and engineers, with input from sales reps that act as go-betweens with customers, tailor each order to the needs of the client.

But those sales reps are more than just briefcase-toting stiffs, says Philip Daskal, vice-president of sales with INKAS.

“We build a relationship with the client—we become their friend—we don’t become the sales guy,” he says.

“That old door-to-door sales (approach) is out the door. What we do is we build relationships, we communicate with the clients and find out what threats they’re trying to avoid.”

Customization is the name of the game, Daskal says, and specializing in one-off armoured vehicles is what has taken the company—which now ships about 50 vehicles a month, a five-fold increase over 2012—to the next level.

“If you’re just trying to avoid kidnapping or carjacking I’m not going to (try and) sell you a vehicle that’s $200,000 more because it protects against AK-47 armour-piercing rounds,” he says.

Doing it well—and doing it in style—is completely different.

From stretched out Mercedes G-Class sport utilities to armoured cash-in-transit Sprinters that look like your local plumber’s van, the custom body work that comes out of INKAS is enough to make the honchos in Stuttgart proud—matching factory body work line-for-line.

That quality craftsmanship has been enough to earn INKAS nods from some big name automakers, including General Motors Co. (GM) and Ford Motor Co., as a certified coachbuilder.

For 18 years, INKAS has built itself on a reputation of quality—zero in-vehicle causalities has a way of bolstering one’s esteem—and craftsmanship in a bulletproof package.

And as the company’s new facility aims to prove yet again, it’s what’s on the inside that counts.