How new COVID-19 variants emerge: Natural selection and the evolution of SARS-CoV-2

The decline of case numbers during a pandemic is due to negative selection forces. These include effective public health interventions that limit the spread from one person to the next. 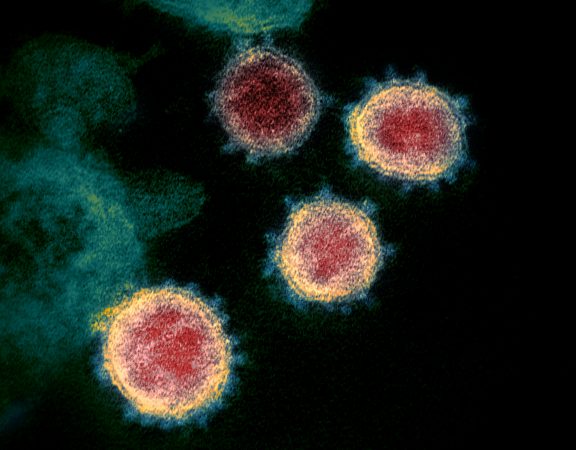 COVID-19 variants are on the rise.
Image: NIAID-RML

Nature is analogue. It is not a binary system. In the living world there are no explicit switches that discreetly turn systems on or off. Rather, nature adjusts systems through analogue dials, like an old radio — gradually changing variables to achieve balance and equilibrium to ensure that life is sustainable and carries on.

Evolution proceeds in this way, with new life forms appearing and some disappearing over millennia — or, in the case of microbial pathogens (viruses, bacteria and parasites) over days or weeks.

Evolution can be studied at the molecular level. For many years, my research was focused on the African trypanosome, the parasite responsible for African sleeping sickness.

Trypanosomes live in the bloodstream of its mammalian hosts (including humans) and early observations of their numbers showed a consistent wave-like pattern of increases followed by declining numbers and then, after a week or so, rising numbers again.

Trypanosomes are vulnerable to the antibodies produced by their host’s immune system, which bind to the parasite and eliminate it. This immune response causes the trypanosome numbers to drop, as illustrated by the low points of the wave pattern. But before the trypanosomes disappear entirely, their numbers rise again and the wave repeats.

This intriguing growth pattern generated much interest and research in my laboratory and, ultimately, we learned that the parasite can alter its molecular identity to evade the host’s antibodies before it is completely eliminated. This means that the population of trypanosomes responsible for each of the wave peaks is a variant distinct from all the others. Antibodies directed against one variant have no effect on subsequent variants, so the wave pattern continues.

The trypanosome’s very successful strategy evolved to help it survive in the face of constant negative selection pressure from antibodies. This mechanism that helps a parasite or pathogen evade the host’s immune system is called antigenic variation.

I am reminded of the growth curve of trypanosomes when looking at the pattern of Canadian case counts from the ongoing COVID-19 pandemic.

The peaks in cases reflect the arrival of new variants, the most recent of which is omicron, the variant now circulating most widely globally.

The strategy used by SARS-CoV-2, the virus that causes COVID-19, is similar to the trypanosome’s, although the mechanism for generating novel variants is quite different. For the virus, new variants arise by mutation in genes that encode the so-called “spike protein,” the part of the virus that enables it to enter cells and infect people.

If mutations result in a spike protein distinct from any other variant preceding it, we will see a new variant appearing. The omicron variant is particularly interesting (and somewhat ominous) because of its high number of mutations, not only in the spike protein but in other viral genes as well.

By employing this strategy of antigenic variation, the survival of the SARS-CoV-2 virus is assured. So, the appearance of new variants is due to mutations that represent the positive selection force: genetic variations that help the organism get reproduced.

The decline of case numbers during a pandemic is due to negative selection forces. These include effective public health interventions that limit the spread from one person to the next (such as masks), as well as the hosts’ immune response (antibodies) resulting from either infection, vaccination or both.

An infected person will, over time, generate antibodies against the virus and begin to eliminate that variant, like in the trypanosome case. But because SARS-CoV-2 mutations occur slowly, the virus needs to find a new, non-immune person to carry on. In order to find new non-immune hosts, the virus induces symptoms that help it to spread: the coughing and sneezing that enable it to jump from one person to the next via droplets.

Given the capacity of SARS-CoV-2 to mutate, there are certainly new variants arising continuously. However, if medical and public health interventions are successful in reducing transmission between infected and uninfected/unvaccinated people, it is quite possible that the virus will evolve to generate a less virulent variant that could establish itself as an endemic infection producing mild symptoms.

When people infected with a pathogenic microbe experience symptoms of illness, those symptoms often serve a purpose: they can contribute to either the microbe’s survival or the survival of the infected host. A classic case is diarrhea resulting from infection with cholera or from amoebic dysentery. Both infections produce life-threatening diarrhea, but the symptom serves different purposes in each disease.

In the case of cholera, this symptom serves the microbe because it enables the bacteria to exit the host’s body and, in places with poor sanitation, contaminate the water supply and transmit to new hosts. In the case of amoebic dysentery, the symptom is a result of the host’s body attempting to rid itself of the infection.

Clinicians must be able to distinguish between these two scenarios in the management of infectious diseases in order to avoid contributing to the problem rather than solving it. In the case of COVID-19, clinical symptoms like sneezing and coughing that enable the virus to spread through the air are positively selecting variants that help the virus spread to new, susceptible individuals (such as unvaccinated people).

That means measures like masking, social distancing and vaccination can impede spread by helping to prevent aerosol transmission.

Continued efforts to achieve a fully vaccinated population are crucial. The unvaccinated and the uninfected are ideal hosts for SARS-CoV-2, and ideal for generating new variants due to the absence of negative selection by antibodies, which makes it easier for the virus to replicate and produce new mutations.

Although nature may move slowly in an analogue manner, humans can flip binary switches and we can act now to ensure global vaccine equity. Ensuring global vaccine coverage is not only imperative from an evolutionary perspective but is clearly the ethical option as well.