How more motorboat collisions are leaving turtles shell-shocked and mutilated

Roads alone kill countless adult turtles every year so boat mortality need not be high to precipitate the decline of some turtle populations. 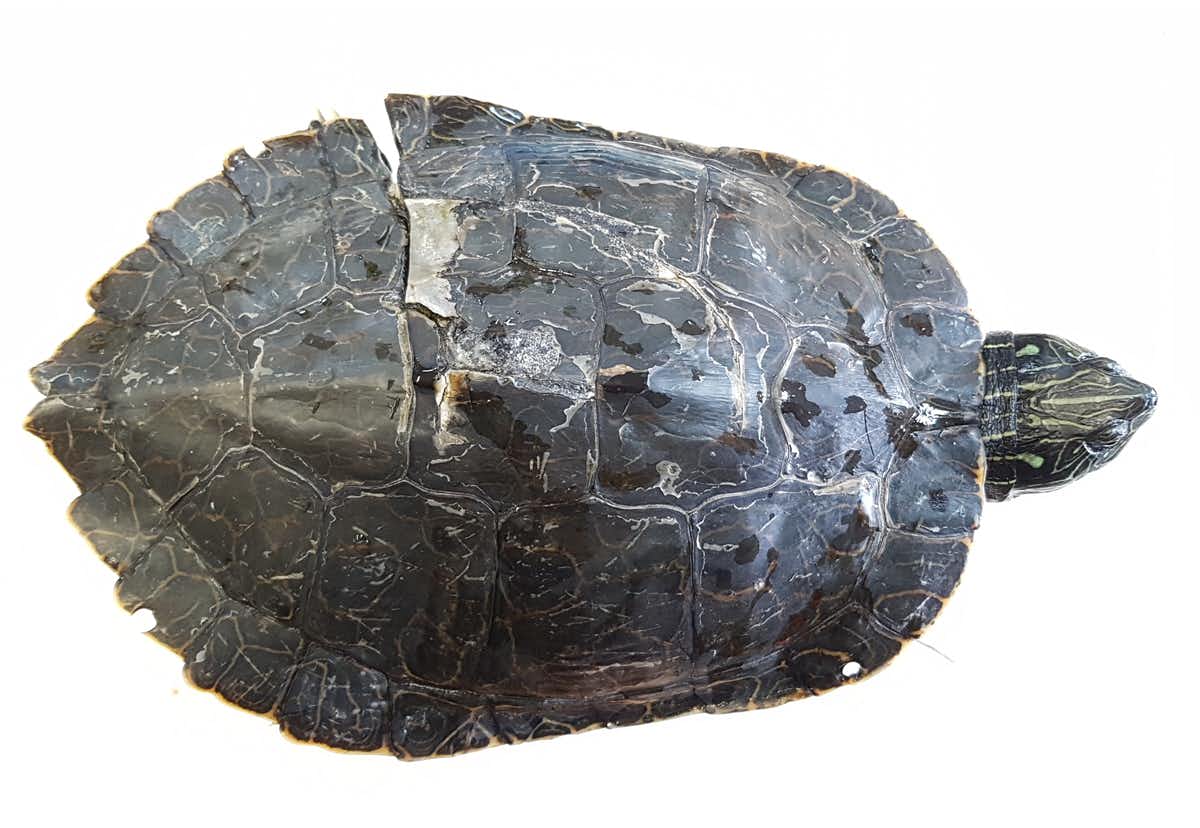 As a wildlife ecologist, I have been keeping tabs on the northern map turtles of Lake Opinicon since 2003. One of these turtles is CJV. She is one of more than 1,800 turtles encountered during our monitoring program.

Every spring, we catch as many turtles as we can. Each turtle is measured, examined for signs of diseases or injuries, and marked with a unique combination of small notches on the edge of its shell. This is how I recognized CJV on May 31, 2019.

CJV and I go way back, to May 19, 2005, to be exact, but we haven’t seen each other since. The passage of time has left its marks on both of us. For starters, I am noticeably greyer, balder and less fit. As for CJV, she has grown a few millimetres, but that would be nearly impossible to tell without very accurate calipers.

But the biggest change in CJV’s appearance is her shell. After missing in action for 14 years, CJV showed up with a large but partially healed scar running from the left side of her shell to her spine. When and where she got injured is anyone’s guess, but the cause of the injury is clear. No natural predators can slice through her bony armour — but a sharp boat propeller surely can.

Lake Opinicon is nested in the Rideau Canal World Heritage Site, and at the heart of the Frontenac Arch Biosphere Reserve. Unfortunately, these designations are doing little to prevent turtles from being chopped up.

When I first captured CJV in 2005, seven per cent of all the females we examined were scarred. When we met again in 2019, the number had climbed to 13 per cent. But mutilated turtles are not unique to Lake Opinicon.

There are eight species of freshwater turtles in Canada. All are federally listed as Species at Risk, meaning that to remain a part of our lakes, ponds and rivers, they need protection and conservation efforts.

Betting on the long haul

It is not a coincidence that all our native turtles are in trouble — the global group of about 350 species is in a dire situation. Sixty-one percent of turtle species are extinct or threatened by extinction. This grim statistic does not have a single root cause. Like most precarious wildlife, turtles are threatened by the usual suspects of habitat loss, poaching, direct mortality from human activities and pollution.

Unfortunately, turtles have something else going against them: a 200-million-year-old gambling habit. When it comes to procreation, turtles play a numbers game: they lay as many eggs as they can over their lifespan, hoping some will eventually make it.

Turtles do not care for their eggs or young in the same way birds and mammals do, and without any care or protection, most eggs and babies are eaten by predators or otherwise die from cold, droughts, floods or other weather hazards. If a female lays enough eggs, however, some will hatch and grow into adults. Longevity is key here, and turtles evolved remarkably long life spans.

Turtles have successfully gambled their way through the last 200 million years, but the playing field has changed. Human activities are cutting the long lives of these animals too short for many females to have won their reproductive bet against time. So here we are with dwindling turtle populations in our protected areas.

We can’t say for sure if, or how much, collision with boats threatens the persistence of turtles because an important piece of information is still missing: the proportion of turtles dying from their propeller injuries. Finding dead turtles in nature is not easy because biologists have fierce competition from scavengers when it comes to finding animal carcasses.

However, what we do know raises a red flag. Many turtle populations are already experiencing an inflated amount of adult mortality. Roads alone kill countless adult turtles every year so boat mortality need not be high to precipitate the decline of some turtle populations.

The visible scars of turtles are a testimony to the pressure recreational boating exerts on aquatic wildlife. Motorboats affect aquatic wildlife and their habitats in many ways: noise pollution, chemical pollution, wakes, erosion, collisions.

In a recent meta-analysis of 94 studies on the effects of water-based recreation on freshwater ecosystems, researchers found boats to consistently cause negative impacts on wildlife. Some of these impacts can be subtle but nonetheless important: the noise from motors alone can affect the behaviour and physiology of nesting bass. Disturbances from motorboats can also reduce the foraging time of waterfowl.

According to the National Marine Manufacturer Association Canada, the sales of outboard engines increased by 17 per cent between 2019 and 2020, and is now at a record high. With such enthusiasm for recreational powerboating, the impacts on turtles and other wildlife need to be measured. This data will dictate the need for conservation actions such as outreach programs, best practices and, if necessary, regulations such as limiting engine size, or restricting traffic.

Mutilated turtles like CJV are a reminder that lakes and rivers are living and fragile ecosystems. These ecosystems and the species they host — including turtles — provide us with countless cultural, economic, health and aesthetic services. These services are increasingly at odds with certain forms of recreational boating.

Without changes in how we perceive and use our lakes and rivers for recreation, we will find more injured turtles … until we won’t find any turtles at all.