Lionfish are invading the western Atlantic Ocean, decimating native fish populations on some Caribbean reefs and posing a problem for recreational dive tourism. 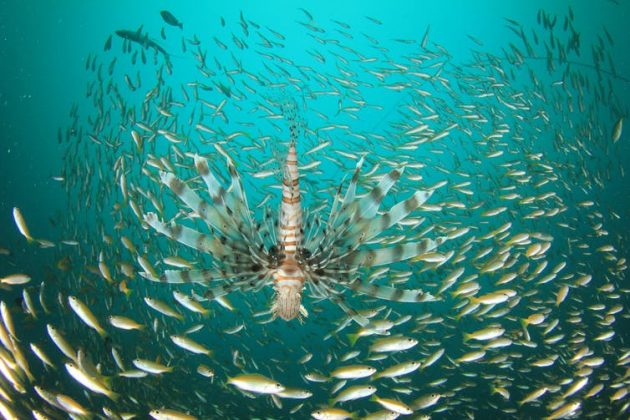 The fish stared at me, and I stared right back, taking in its tiger-like red and white stripes, its flamboyant, fan-like pectoral fins, and the row of venomous, upright spines along its back. Thin pieces of its flesh swayed ominously on the spikes in the ocean currents.

The lionfish is a striking creature. There is no wonder why it is a popular fish in the aquarium trade.

But the lionfish is also infamous, at the centre of one of the most well documented and concerning marine fish invasions in history. Large individuals are often bold and will position themselves in a head-down, menacing posture with flaring fins and swaying spines, toward any potential threat, including divers like me.

I was on a reef off Eleuthera Island, in the Bahamas, where I was studying the interactions between native predatory fishes and invasive lionfish.

The lionfish has few natural predators, and its venomous spines pose a major problem for marine managers because they deter potential predators that could naturally control the growth of this invader’s population. I hoped my research might show that at least some predators in the Bahamas could challenge the successful takeover of reefs by lionfish.

Lionfish — a general term often used to describe two species, Pterois volitans and P. miles — are native to the Indian and Pacific oceans where they are mid-level predators on coral reefs, feeding on a variety of crustaceans and small fishes. But they are now invading the western Atlantic Ocean, from North Carolina to Brazil.

Lionfish were introduced in the mid-1980s off the coast of Florida, where they escaped from home aquariums or were intentionally released. Now spread out along much of the American Atlantic coast, these efficient predators have decimated native fish populations on some Caribbean reefs by an average of 65 per cent. And it doesn’t stop there. Lionfish are also now invading parts of the eastern Mediterranean.

Among its prey are young commercially valuable species like snappers and grunts, meaning lionfish could have a negative impact on reef fisheries in the medium- to long-term. It also eats the critically endangered social wrasse, found only in Belize. It has even consumed substantial numbers of a fish species new to science.

They also pose a bit of a problem for recreational dive tourism.

When lionfish numbers grow and native fishes decrease, the esthetic value of coral reefs can drop. One study found that unexperienced divers preferred seeing lionfish on reefs, but more experienced divers, who also tend to spend more money diving, did not.

In 2008, a study found Caribbean groupers, a common and widespread group of medium-to-large sized coral reef fishes, were eating lionfish in the Bahamas. This early evidence gave everyone in the region hope that groupers might be a natural, cheap and relatively easy solution to reducing lionfish numbers and curbing their negative impacts on native fish. One would only have to protect the groupers and let nature do its thing.

It seemed far more financially feasible and ecologically effective than other strategies like culling, which involves divers plucking lionfish from reefs one by one using pole spears and nets. It would also involve less work than persuading people to fish and consume lionfish through a commercial fishery.

Later studies, however, produced conflicting evidence. One small-scale, observational study in a marine protected area in the Bahamas showed that lionfish abundances tended to decline with increasing abundances of native groupers. Yet a larger study involving three eco-regions within the Caribbean, found no relationship between lionfish and grouper abundances.

Both studies searched for correlations between grouper and lionfish abundances in the Caribbean, and both lacked experimental field work. Until now.

The power of fear

In a field experiment on coral reef patches around Eleuthera Island, the Bahamas, Isabelle Côté, a professor of marine ecology at Simon Fraser University, and I investigated whether groupers might limit the success of lionfish in more subtle ways. Perhaps the fear of being eaten (called fear effects) or competition for food from similarly sized groupers would limit lionfish survival, or their negative impacts on native species.

Fear effects are common in nature. They occur when prey alter their behaviours in ways that make it difficult for predators to encounter, detect or capture them — but sometimes at a cost.

The lionfish has few natural predators, and its venomous spines pose a major problem for marine managers because they deter potential predators that could naturally control the growth of this invader’s population. I hoped my research might show that at least some predators in the Bahamas could challenge the successful takeover of reefs by lionfish.

Unfortunately, we didn’t see a change in the abundance of native fish in our study. This might have been due to bad timing. When we went to measure them, the reefs were flooded with hundreds of small, yellow grunts following a major, summer recruitment event, when young fish settle out of the water column onto reefs. Any effect that reduced lionfish foraging may have had on prey fishes could have been swamped by this excess of available food.

So where does this leave us? Large groupers may play a role in reducing lionfish foraging success, but it is unclear whether this effect has any bearing on native prey populations or on lionfish traits that may increase its ability to survive or reproduce, like body size.

Groupers are heavily fished throughout the Caribbean. If they are to have an effect on the lionfish invasion, governments may need to impose stricter regulations that protect more than just one species of grouper.

Groupers may not be the silver bullet that saves coral reefs. Other, potentially more difficult, invasion management strategies like culling, lionfish tournaments and promoting a commercial lionfishery may all be required. We may need to throw everything at this problem.