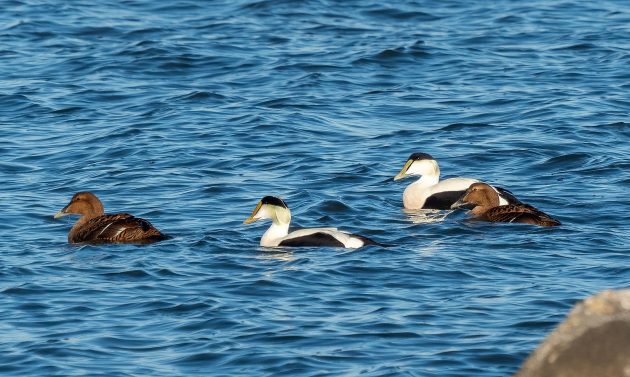 Herd immunity, when a threshold proportion of a population becomes immune to a disease-causing organism, reducing or stopping further transmission, is very much in the news. Avian cholera much less so. But there is an intersection between these two subjects that appears to have played out over eight summers between 2005 and 2012 at the largest colony of Arctic-nesting sea ducks, specifically Northern common eiders, in the Canadian Arctic.

To wildlife disease ecologists, an ideal place to test ideas about herd immunity is Mitivik Island, Nunavut. The sea duck colony on this well-demarcated 24-hectare island was exposed to avian cholera in the recent past. This population, long-monitored by Inuit and researchers, was likely entirely naïve, or previously unexposed, to this disease before 2005.

Avian cholera is a disease of birds, caused by an entirely different bacterial species than that responsible for human cholera. Notably, both diseases can lead to outbreaks among their hosts as they are highly transmissible between individuals and highly infectious. When tens to hundreds of dead or dying waterfowl are found locally and are not showing overt signs of emaciation, it could very well signal an avian cholera epidemic.

Avian cholera has been responsible for rapid and mass die-offs of birds around the world, but it is particularly problematic for waterfowl in North America where epidemics are relatively common.

Our research on avian cholera suggested herd immunity resulted in the flip side of an outbreak, called an epidemic fadeout.

In wildlife, as in humans, immunity can be naturally or artificially generated, principally due to heightened antibody and T-cell responses to the infectious organism itself or due to vaccination against the agent or a (biologically engineered) part of it.

Sea duck immunity was all natural. Cholera antibody levels were determined by laboratory screening of frozen and archived blood samples, as a sort of cold case investigation.

We found the average antibody level in the sea ducks correlated inversely with infection rate. For example, antibody levels were high among sea ducks in years when death rates among nesting hens were low. This variable provided an estimate of the mathematical term R0, which is shorthand for the average number of new infections generated by a single infected individual. R0 was widely variable among years, but was not correlated with the proportion of birds carrying the bacterium estimated from genetic tests, nor was it associated with annual population size of sea ducks on the island. Only average antibody level was an important predictor of R0.

Why should we care about sea ducks and avian cholera? These Northern common eiders are free-ranging but colony-nesting birds that can provide important tests of factors affecting localized epidemics in wildlife. Our scientific study was meant to determine if the proportion of birds carrying healthy reserves of antibodies to avian cholera negatively affected susceptible birds returning to nest — and whether protective herd immunity of remaining naïve birds resulted. Herd immunity appeared to have been reached, but it was not without its demographic insults.

Losses on the way to herd immunity

The local breeding population lost approximately 3,000 birds — or 36 per cent of its nesting birds — through mortality caused by avian cholera in the summer of 2006. The numbers of breeding hens on Mitivik Island were reduced by upwards of half over the entire course of the cholera epidemic from an all-time high of over 8,000 breeding hens.

This outbreak threatened the viability of this colony, and similar fears are being raised about eiders in Iceland as the disease has reached its shores in the past couple of years.

Because herd immunity is not perfect (populations exchange naïve and infected individuals), the disease still smoulders among Arctic eiders colonies. Local outbreaks, likely from movement to and from sites with smouldering infections, repeated throughout the many smaller Arctic nesting colonies, which led to studies on environmental correlates of disease occurrence, most notably spring migratory routes from wintering sites in Atlantic Canada to the Arctic breeding sites.

Arctic eiders are culturally important. Common eiders, known collectively by Inuit as Mitiq along with King eiders, are part of a subsistence economy. There is a local trade built around collecting feather down for winter clothing and harvesting eggs and the birds for consumption.

Understanding threats to the viability of populations of these sea ducks may seem crucial to protecting this subsistence economy. But avian cholera outbreaks may not be manageable in the Canadian Arctic where populations are widespread but dispersed and difficult to access with management options. The reality might be just to wait it out.