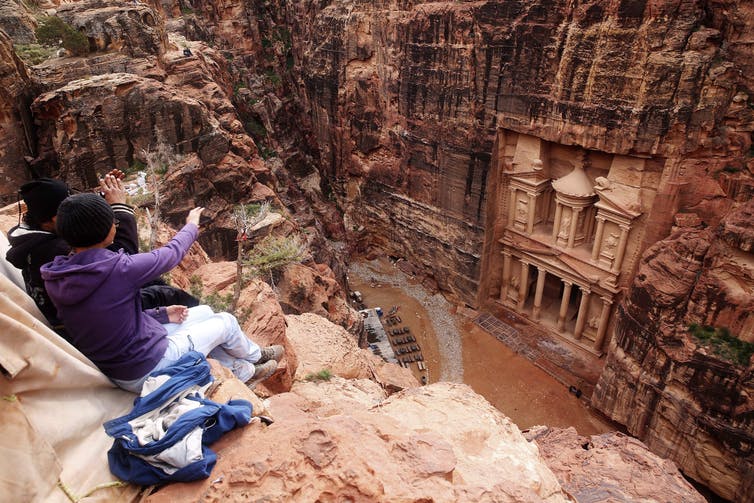 The Treasury, a monumental tomb carved from bedrock by the Nabatean civilization in the Petra archeological park, in southern Jordan. The Nabateans dug diversion tunnels to protect their capital of Petra against flash floods. (AP Photo/Sam McNeil)

This year witnessed one of the hottest and driest summers in recent history for Western Canada and the American Southwest. The resulting droughts adversely affected food supply and helped send meat prices rising three times faster than inflation.

Despite the severity of these droughts, the worst may be yet to come. Extreme weather events are expected to become increasingly severe and frequent in the Prairies, with longer dry periods coupled with the risk of floods from intense rainstorms.

While Canada benefits from a world-class agricultural technology industry, lessons can also be drawn from low-tech solutions developed by ancient societies that flourished in arid climates. One such society was the Nabataean culture, which thrived in the hyper-arid deserts of Jordan, northern Saudi Arabia and southern Israel 2,000 years ago. For over a decade, I have worked on Nabataean and Roman archeological sites of this region, exploring their building practices and innovative strategies for overcoming environmental limitations.

Known for their rock-carved monumental facades at the UNESCO World Heritage sites of Petra (their capital) and Hegra, the Nabataeans grew rich from trading incense between southern Arabia and the Mediterranean. But it was another skill that allowed them to flourish in their arid homeland.

Drawing on local techniques as well as those adopted from neighbouring cultures, the Nabataeans became masters of hydraulic engineering. They constructed complex water management systems that included dams, catchment systems, underground cisterns and aqueducts. These systems were designed to maximize the amount of rainwater collected and stored during the wet winter months and to minimize the amount of water lost through evaporation during the dry summer months.

At Petra, the Nabataeans constructed a network of dams to protect their capital from flash floods and covered channels to deliver water to the city centre. In the surrounding hillsides, they built terraces to absorb runoff, mitigating flood risk and supporting agriculture. So effective were these catchment and delivery systems that the Nabataeans built open-air pools and monumental fountains in Petra as ostentatious displays of their wealth and power.

South of Petra, at the archeological site of Hawara (modern Humayma), Canadian archeologists have explored and documented the settlement’s extensive water supply system. Here, catchment systems directed rainwater runoff to large cisterns that stored it for use in the dry season. These cisterns were roofed to prevent evaporation and were furnished with settling basins to collect sediment. A 26.5-kilometre spring-fed aqueduct also supplied this settlement with drinking water. Much of this system is still in use today.

Ancient techniques for a modern problem

Despite being developed and constructed two millennia ago, efforts are currently underway to revitalize the Nabataean water management systems around Petra to help with flood control and support agricultural development. Elsewhere across the globe, archeology has advanced our understanding of sustainable farming and holds the potential to contribute meaningfully to contemporary water politics. While implementation of these historical solutions may not by themselves solve the complex issues we currently face, they will likely play an important role in helping us adapt to a warmer and dryer climate.

Although the climate and hydrology of the Canadian Prairies are very different from the deserts of northern Arabia, some similarities exist. Just as winter rains in northern Arabia sustained life during the summer months, runoff from snow melt in the Prairies plays an important role in recharging groundwater and represents a significant portion of stream flow during the spring.

Like the underground cisterns built by the Nabataeans, excavated depressions known as dugouts are an important source of water for Prairie farmers. While these human-made reservoirs can be supplied by groundwater, they often rely on spring snow melt. During the drought conditions of this past summer, however, many of these dugouts dried up, forcing many farmers to rely on pumped groundwater, which comes with its own set of issues.

Adopting sustainable practices similar to those used by the Nabataeans to maximize the amount of water collected and minimize the amount lost to evaporation can help increase the effectiveness of these reservoirs. Just as the Nabataeans placed their cisterns to maximize the catchment of runoff, dugouts should be strategically located in fields to collect as much snow melt as possible. The amount of snow melt captured can be further increased by the use of well-designed shelterbelts, which comprise rows of trees and shrubs that act as a windbreak and can also encourage the accumulation of snow.

Settling tanks such as the ones the Nabataeans built to prevent the accumulation of sediment in their cisterns, could also be used to prevent sedimentation in dugouts, improving both storage capacity and water quality.

The Nabataeans were also careful to avoid evaporation, and modern dugouts may benefit from being covered to minimize water loss. Global studies have shown the effectiveness of physical covers at slowing the rate of evaporation, and recently California proposed covering its canals with solar panels to help conserve its water supply while also producing green electricity.

Part of an integrated strategy

While greater investment in water storage systems will improve water security in the Prairies and mitigate the affects of prolonged droughts, these storage systems may also have the added benefit of reducing flood risk by retaining runoff.

Although the adoption of these low-tech and sustainable solutions will not by themselves drought-proof the Prairies, when combined with innovative cropping techniques they may play an important role in helping Canada’s farmers mitigate the growing impacts of climate change.