Geothermal power represents less than 0.5% of the utility-scale electricity generation in the U.S. One reason it remains a stagnant energy technology is the lack of strong policy support. 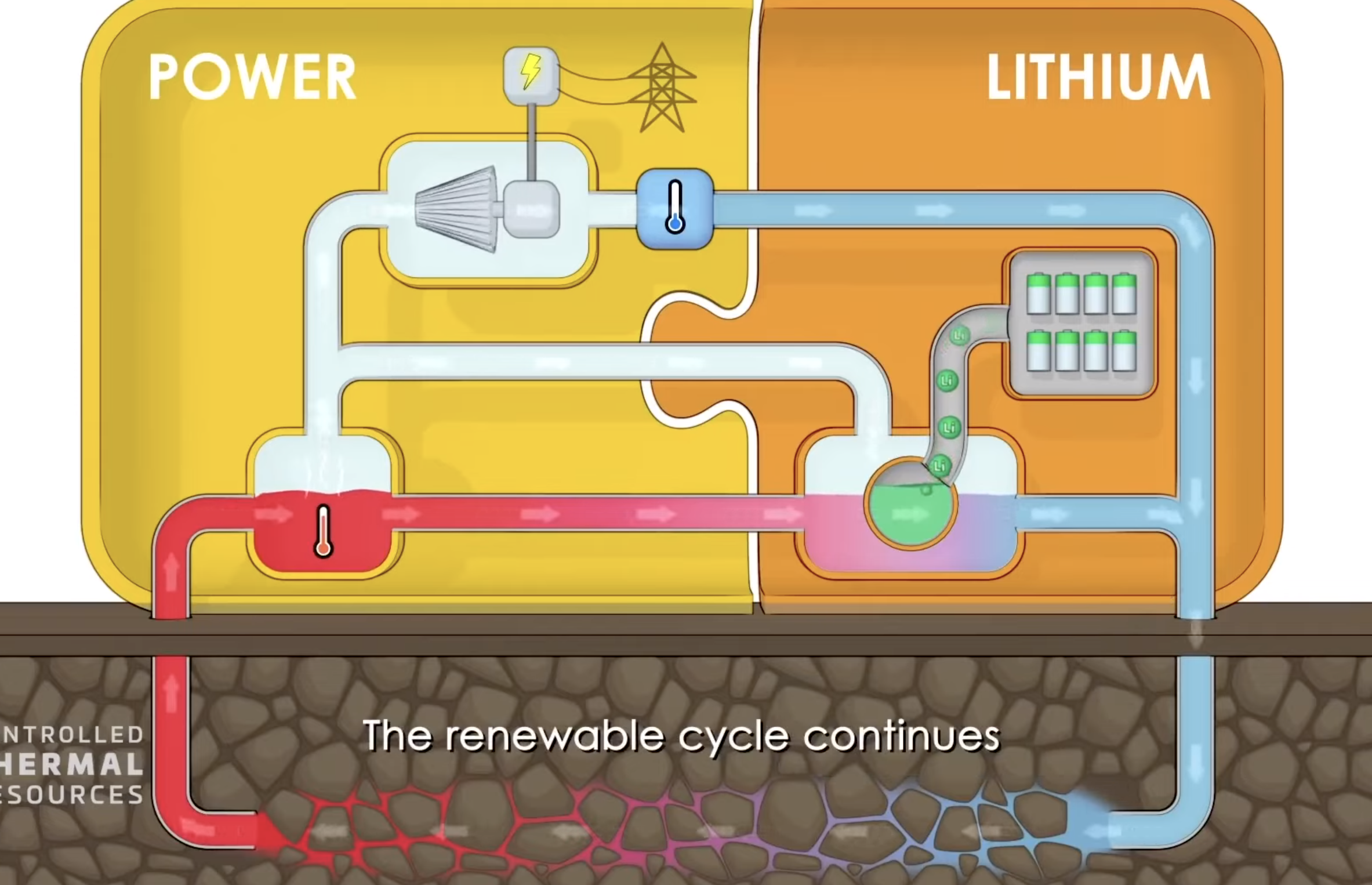 How lithium is extracted during geothermal energy production. Courtesy of Controlled Thermal Resources.

Geothermal energy has long been the forgotten member of the clean energy family, overshadowed by relatively cheap solar and wind power, despite its proven potential. But that may soon change – for an unexpected reason.

Geothermal technologies are on the verge of unlocking vast quantities of lithium from naturally occurring hot brines beneath places like California’s Salton Sea, a two-hour drive from San Diego.

Lithium is essential for lithium-ion batteries, which power electric vehicles and energy storage. Demand for these batteries is quickly rising, but the U.S. is currently heavily reliant on lithium imports from other countries – most of the nation’s lithium supply comes from Argentina, Chile, Russia and China. The ability to recover critical minerals from geothermal brines in the U.S. could have important implications for energy and mineral security, as well as global supply chains, workforce transitions and geopolitics.

As a geologist who works with geothermal brines and an energy policy scholar, we believe this technology can bolster the nation’s critical minerals supply chain at a time when concerns about the supply chain’s security are rising.

Geothermal power plants use heat from the Earth to generate a constant supply of steam to run turbines that produce electricity. The plants operate by bringing up a complex saline solution located far underground, where it absorbs heat and is enriched with minerals such as lithium, manganese, zinc, potassium and boron.

Geothermal brines are the concentrated liquid left over after heat and steam are extracted at a geothermal plant. In the Salton Sea plants, these brines contain high concentrations – about 30% – of dissolved solids.

If test projects now underway prove that battery-grade lithium can be extracted from these brines cost effectively, 11 existing geothermal plants along the Salton Sea alone could have the potential to produce enough lithium metal to provide about 10 times the current U.S. demand.

Three geothermal operators at the Salton Sea geothermal field are in various stages of designing, constructing and testing pilot plants for direct lithium extraction from the hot brines.

At full production capacity, the 11 existing power plants near the Salton Sea, which currently generate about 432 megawatts of electricity, could also produce about 20,000 metric tons of lithium metal per year. The annual market value of this metal would be over $5 billion at current prices.

Existing lithium supply chains are rife with uncertainties that put mineral security in question for the United States.

Russia’s war in Ukraine and competition with China, as well as close ties between Russia and China, underscore the geopolitical implications of the mineral-intensive clean energy transformation.

China is currently the leader in lithium processing and actively procures lithium reserves from other major producers. Chinese state mining operators often own mines in other countries, which produce other vital clean energy minerals like cobalt and nickel.

There is currently one lithium production facility in the U.S. That facility, in Nevada, extracts saline liquid and concentrates the lithium by allowing the water to evaporate in large, shallow ponds. In contrast, the process for extracting lithium while producing geothermal energy returns the water and brines to the earth. Adding another domestic source of lithium could improve energy and mineral security for the United States and its allies.

Geothermal power today represents less than 0.5% of the utility-scale electricity generation in the U.S.

One reason it remains a stagnant energy technology in the U.S. is the lack of strong policy support. Preliminary findings from a research study being conducted by one of us indicate that part of the problem is rooted in disagreements among older and newer geothermal companies themselves, including how they talk about geothermal energy’s benefits with policymakers, investors, the media and the public.

Geothermal power has the ability to complement solar and wind energy as a baseload power source – it is constant, unlike sunshine and wind – and to provide energy and mineral security. It could also offer a professional bridge for oil, gas and coal employees to transition into the clean energy economy.

Adding the production of critical metals like lithium, manganese and zinc from geothermal brines could provide geothermal electrical power operators a new competitive advantage and help get geothermal onto the policy agenda.

Geothermal energy gets a boost in California

Trends might be moving in the right direction for geothermal energy producers.

In February, the California Public Utilities Commission adopted a new Preferred System Plan that encourages the state to develop 1,160 megawatts of new geothermal electricity. That’s on top of a 2021 decision to procure 1,000 megawatts from zero emissions, renewable, firm generating resources with an 80% capacity factor – which can only be met by geothermal technologies.

The California decisions were primarily meant to complement intermittent renewable energy, like solar and wind, and the retirement of the Diablo Canyon nuclear power plant. They suggest that the era of geothermal as the forgotten renewable energy may be ending.