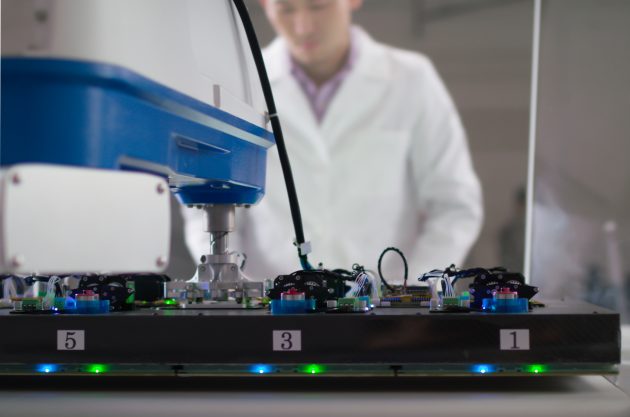 Demonstrating static electricity by using a charged balloon to levitate your hair is a classic science experiment. But, imagine if you could harness the same static cling to handle a material as fragile as an egg, as flimsy as soft fabric — or to assemble the uppers of Nike trainers at 20 times the pace of a human worker.

Hatched in the heart of Silicon Valley, in Sunnyvale, California, robotics start-up Grabit is harnessing static electricity, machine learning and automation from Shibaura Machine partner, TM Robotics, to do just that.

Material handling is one of the most labour-intensive and expensive aspects of manufacturing, and when dealing with an array of different materials, the process is impossible to automate. Assembling a pair of Nikes requires as many as 40 pieces of material to be stacked and heated to create the upper — the flexible part that sits on top of your foot. For a human worker, arranging the pieces of material can take up to 20 minutes. However, Grabit’s technology allows a machine to do this in as little as 50 seconds.

Despite its evocative name, Grabit’s material handling invention does not mimic the human grabbing motion present in many robots. Instead, the start-up harnesses static electricity — referred to as electroroadhesion — to handle materials in a way no robot has before.

The concept of electroroadhesion was discovered at SRI International, by Grabit’s co-founder and chief technology and products officer, Dr. Harsha Prahlad. The process uses a flat pad of electrodes to generate positive and negative charges on the surface. When charged correctly, the electrodes create an electric field that adheres to nearly any surface, allowing the robot gripper to pick up the part that is being handled.

Following Grabit’s inception in 2013, Nike Inc. made an investment in the company and later became one of the first customers to buy its materials handling robot system, Stackit. Using Stackit, Nike can manufacture 600 pairs of shoes in just one eight-hour shift.

The creation of Stackit began in summer 2015, but before the manufacturing process could begin, the company needed to decide on the right robot to mount the revolutionary electroadhesive gripper on. Having seen a Shibaura Machine robot arm used to mount one of its grippers by a customer — a Japanese circuit board
manufacturer — Grabit was intrigued to see how the robot manufacturer’s machines could be used as a larger part of Stackit’s development.

“Choosing the wrong robot could have a detrimental effect on the entire design of the system,” explained Greg Miller, president and CEO of Grabit. “Two members of our team already had extensive experience in robot design, and both had been involved in the development of several SCARA robots. This prior understanding of industrial robots enabled us to fine tune our requirements before approaching any manufacturers.”

Finding a customizable robot at a competitive price point proved difficult, but manufacturing in the footwear and apparel industry is driven by costs. Combined with the further financial pressure of low labour rates in many manufacturing countries, Grabit needed a cost-effective robot. This was the moment when TM Robotics, Shibaura Machine’s American and European distributor, really proved its worth on the project.

“As a start-up, we needed a robot provider that could support us through the entire process, not simply sell us the product and leave,” explained Miller. “Despite being an official partner for Shibaura Machine, TM Robotics could also provide the careful and attentive sales, service and support of a much smaller company.”

Grabit wanted to use its own control system to oversee the whole machine, they needed deep access to low level internal control code and the control package needed to be small enough to fit into a tight space in the design.

Following some adjustments to the off-the-shelf Shibaura Machine robot, the equipment was still not stabilizing fast enough. To help achieve this, TM Robotics flew Shibaura Machine’s chief engineer from its headquarters in Japan to Grabit’s base in California.

“TM Robotics’ support and customization process was not limited to phone calls and e-mails,” explained Prahlad. “Working in collaboration with Grabit’s knowledgeable robot engineers, they were able to talk to us in a language our technical team understands and allowed us to fine tune the machine to our exact requirements — not many robot companies allow for that level of personalization.”

Grabit used Shibaura Machine’s THL1000 SCARA robot in the Stackit application, a horizontal multi-joint machine with four controlled axes. With a 1000mm arm length, the THL1000 has the largest reach of the THL robot range. The allowable moment of inertia is just 0.2kg/m2 and, as a result of using absolute encoders, the robots’ repeatability in X-Y is 0.01mm.

As standard, the robot offers a maximum payload of 10kg against a total mass of 37kg. With a tested load of 2kg, the machine can achieve a cycle time of just 0.48 seconds.

However, due to the specific load requirements for Stackit, Grabit’s customized version was created using a different ratio of gears, causing an enhancement in payload capability.

“Grabit’s electroadhesion technology was not only impressive, but innovative enough that we were keen to get involved,” explained Nigel Smith, CEO of TM Robotics. “Grabit’s experts knew exactly what they needed, and our close collaboration led to an insightful process of experimenting and fine tuning the capabilities of our existing Shibaura Machine robots.”

The number of industrial robots deployed worldwide increased to around 2.6 million in 2019. That’s around one million more robots than 2015Grabit’s deployment of electroadhesion increases the time and resource-saving potential and opens doors to entirely new possibilities in automation — impressive stuff for the same force that lifts strands of your hair using a balloon.