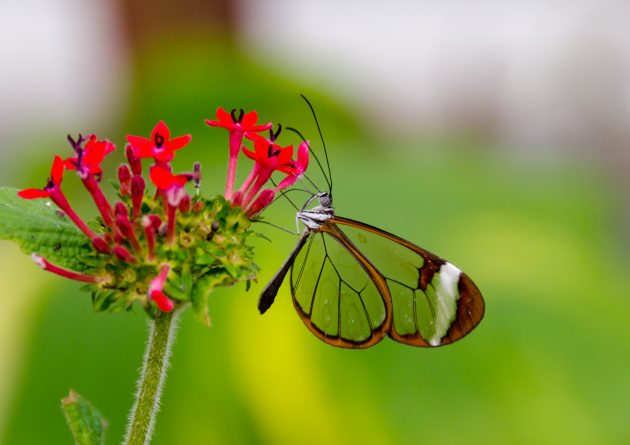 What would you do if you could be invisible? Would you use your power for good? For evil? Or just to avoid awkward conversations?

Transparency may seem like the simplest form of camouflage, but in the last year, research has revealed new complexities behind what some animals do to vanish into their surroundings.

In my research, I have experienced first-hand how effective and sophisticated transparency really can be. That story begins on a dark night in the pouring rain in the thick of French Guiana’s tropical rainforest.

My colleagues and I could only see as far as the beams of our headlamps would permit. We scanned the branches overhead for the source of a strange, high-pitched chirp: an almost metallic sound cutting sharply through the nightly cacophony of buzzing, rasping and squeaking.

Finally, our headlamps revealed a pair of googly eyes peering down on us, and we knew we had found what we had been searching for: a tiny glass frog (Teratohyla midas), only a couple of centimetres long. These bizarre frogs have transparent skin that lets us look directly at their intestines and bones — even at their beating hearts.

Glass frogs are an amazing sight but seeing one raises an interesting question: what’s the point of having transparent skin if your predators can still see you, or your internal organs?

Let’s take a step back to see how transparency works and understand why we’re not constantly bumping into invisible creatures. Although transparency seems like an obvious type of camouflage — if that’s not too much of a contradiction in terms — becoming transparent is not easy.

We can see what’s around us because of how different objects interact with light. If something is opaque, light is either reflected or absorbed at its surface. For something to be transparent, light must instead travel straight through it.

But as light moves between transparent materials it can be bent and scattered. Think about how a straw in a glass of water appears to bend. This is refraction, and results from the different ways that light moves through air and water.

An animal’s body is made up of many organs and tissues, each with a different thickness, structure and chemical makeup. For the animal to be transparent, light must not be reflected, absorbed, scattered or refracted as it travels through each of these different layers.

Water-dwelling animals are at a clear advantage in terms of achieving transparency. Animal bodies are mostly made of water, and if a creature is already in the water, there is much less refraction and scattering of light. As a result, some of the most effective examples of transparency are oceanic species like jellyfish and shrimp.

On land, transparency is much rarer, but we are now learning that it can be very effective, sometimes in unexpected ways.

Clearwing butterflies, for example, are not bound by the colours and patterns other butterflies use to blend into specific backgrounds. Instead, their fully transparent wings mean that predators look straight through them, and they can blend effectively into any background.

Several large moth species have taken a different route. Instead of making the whole wing transparent, their wings have transparent panes that allow patches of the background to show through. By combining these transparent panels with opaque colours, the wing surface is broken up and the moth transformed into an unrecognizable mosaic.

So, what of our little transparent frogs back in the rainforest? Here, transparency provides yet another form of camouflage. Unlike butterflies and moths with their transparent wings, these frogs have all of their internal organs on show, preventing true transparency. Instead, by combining their transparent underside with a green topside, the frogs become translucent: allowing some light through but not showing a clear image.

Their green colouring is a close match to that of a generic leaf, and the trick of translucency allows the frog to brighten or darken in keeping with the leaves around it. What’s more, the frogs’ legs are more translucent than their bodies, providing an extra advantage from a process called “edge diffusion,” further blending frog and leaf together in the eyes of its predators.

Transparency makes animals hard to find, but there are many ways for animals to achieve invisibility.

Understanding how animals evade detection can help us protect species as humans continue to change the natural world around us.