MaRS is hoping to provide greater traction to businesses with cleantech innovations and was looking for feedback from panelists on how their experience has been thus far. 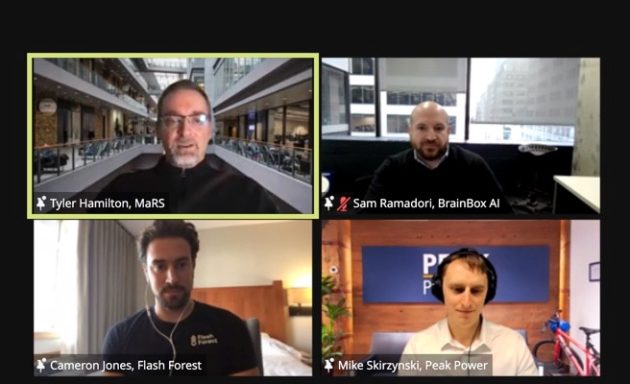 On Oct. 25 and 26, EDC held its Cleantech Export week, and a number of sessions were held to explore new and innovative cleantech businesses on the rise across Canada in a variety of sectors.

One particular panel on Oct. 26 focused on cleantech businesses being supported by ‘Mission from MaRS’, an incubator charged with supporting cleantech ideas scale up into successful businesses, and the unique challenges they’re presented in a pandemic environment.

MaRS has a mandate to look for ventures across three core technology and infrastructure themes, being energy, real estate and transportation. The Oct. 26 panel was held with Tyler Hamilton, Director of Ecosystem, Cleantech at MaRS, Cameron Jones, Co-Founder and COO of Flash Forest, Sam Ramadori, President of BrainBox AI and Mike Skirzynski, Director, Strategy and Corporate Development at Peak Power.

MaRS is hoping to provide greater traction to businesses like these and was looking for feedback on how their experience has been so far. BrainBox AI is a tech company applying autonomous AI to efficiently power and heat buildings. Flash Forest is a company that uses drones to plant trees to increase environmental reclamation efforts. Peak Power is a software company that optimizes power plants and the charging of energy grids and devices.

When asked about how their efforts around expansion have been going in Canada, and if their pitches are being received differently abroad, the panelists were clear.

“There is a definite risk aversion I encounter here that I don’t encounter in conversations with international clients,” says Cameron Jones, COO of Flash Forest.

The sentiment was shared by all panelists, echoing that it was harder to sell in Canada than in the U.S., with companies taking a wait-and-see approach to how adoption was going in other parts of the world.

The panel also echoed the understanding that government procurement is slower than it needs to be.

“It’s a real issue across all governments,” says Sam Ramadori, President of BrainBox AI. “There are tax credits, grants and programs being created that aren’t being taken advantage of. Allocation is still being done the traditional way, which is time consuming and inefficient.”

Sam also mentioned difficulty in accessing federal funds due to very particular regulations around what those funds could be released for.

Tyler Hamilton, Director of Ecosystem, Cleantech at MaRS, also mentioned a ‘pilot purgatory’ as a space where many startups get stuck. Startups find programs to help them scale up, but in reality, they are having to jump through many hoops to be able to access the funding and networks from these programs.

With the number of incubator programs across Canada, especially in trying to help startups scale their cleantech innovations, there is a sentiment among panelists that sometimes incubators are more trouble than they’re worth.

Panelists specifically mentioned the SDTC fund as being invaluable, as well as their participation in the MaRS incubator.

“My experience working with MaRS has been all great,” says Cameron. “We’ve been a part of some incubators where there’s more work actually created for us, but MaRS has taken the approach of not creating more work, by staying out of our way and instead just providing us access to their network.”

“MaRS has helped to bring in new stakeholders we don’t typically associate with but are really valuable,” says Mike Skirzynski, emphasizing the power of networking brought in with good incubator programs.

Panelists agreed that with incubators, small businesses with cleantech innovations need to do their research and be meticulous in order to avoid being stuck in that ‘pilot purgatory.’

With Canada’s renewed focus on reducing emissions, it’s paramount for small businesses to research all of the available funding and programs available in order to ensure a successful scale-up.