The increasingly short tenures are partially attributable to the expectations that members and supporters have of the leader. 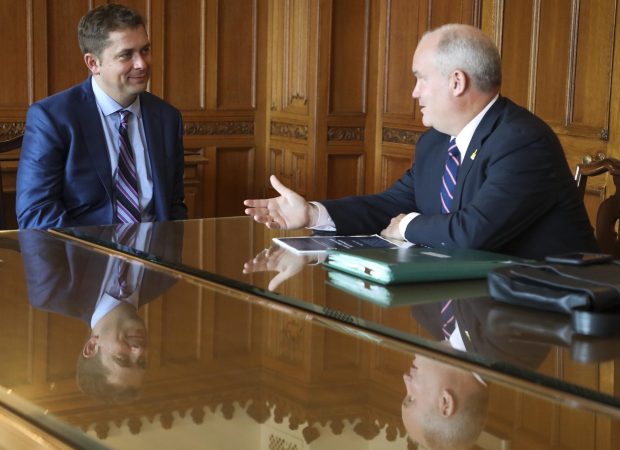 The Conservative Party isn’t the only party whose leaders stay in the top job for increasingly shorter periods. The Liberal Party of Canada dealt with a similar issue in the mid-2000s.

Since the 1970s, Canadian political parties have been using a form of intra-party democracy — called closed primaries by scholars — where party members and/or supporters have the right to participate in the leadership selection process. These should not be confused with open primaries used by American parties where any voter can vote for a leader.

As a researcher with a focus on the causes and effects of leadership selection procedures, I see O’Toole’s fate as a textbook example of the impact these selection rules can have on leadership tenure and party cohesiveness.

The average length of leadership tenure has declined in many parliamentary democracies. While giving party members and, in some cases, party supporters a voice in the leadership selection process is a well-intentioned initiative, leaders chosen with decentralized procedures like closed primaries tend to have shorter leadership tenures.

In Canada, O’Toole, Andrew Scheer, Michael Ignatieff and Stéphane Dion are all recent examples of leaders who were either ousted or stepped down following a closed primary selection process and a subsequent disappointing election result.

The increasingly short tenures are partially attributable to the expectations that members and supporters have of the leader. For example, Liberal and Conservative supporters expect them to win enough seats to form a government, whereas New Democratic Party supporters seemingly expect the party to either maintain a minimum number of seats or increase them, not necessarily to win the election.

These differing expectations may partly explain why Jagmeet Singh is still leading the NDP despite having gained only one seat in the 2021 election.

The advantages of a new leader fade for a party if too much time passes between the convention and the next election. What’s more, a fresh face will not necessarily fare better on election day despite the quality of their leadership campaign.

Much like we saw with the selection of Justin Trudeau as Liberal Party leader, a decentralized leadership selection process may encourage younger citizens to engage with political parties, but that doesn’t mean they’ll support the party beyond voting for its leader. Nevertheless, these processes can fuel the expectations that citizens, party members and supporters have of political parties — in short, that they should win the election.

This begs the question: to whom are party leaders accountable? All voters or party members only?

Leadership races are an excellent opportunity for a party to debate publicly and for voters to hear all of its voices. Particularly, they allow all candidates to indicate how they believe the party should position itself on a given set of policies, such as gun control, abortion or climate change.

They’re also a good way for candidates to reveal their political aspirations for future leadership races, for obtaining an eventual position in the cabinet or shadow cabinet and to put issues on the party’s agenda. The past two Conservative Party leadership races were no exception.

But, while closed primaries offer an opportunity to discuss these issues, the result often means MPs must work with someone who won the leadership because they support policies that aren’t mainstream — and who they didn’t vote for, even though other party members did.

Nevertheless, MPs must rally around their leader and, in some cases, work with former leadership rivals. But when the new leader is more aligned with only a specific faction in a party, it complicates matters for MPs who are, above all else, responsible to their constituents.

Following O’Toole’s ouster, some argued that “MPs are not instruments of a leader’s will.” That may traditionally be so in a Westminster parliamentary system, but according to a comparative study, a study of the British Labour Party and Canadian research, changes in leadership selection rules have gradually given more power to leaders.

But thanks to Conservative MP Michael Chong’s Reform Act, MPs now have a mechanism to remove their leader. The law gives the party caucus more power by allowing MPs to launch a review of their party leader.

While it’s a tool available to MPs, research suggests Chong’s Reform Act is simply a means to a predictable end. Going forward, it will be interesting to see how parties choose and oust their leaders.