AMD, NXP, and Analog Devices are expected to join the ranks of the ‘megasuppliers’ in 2021 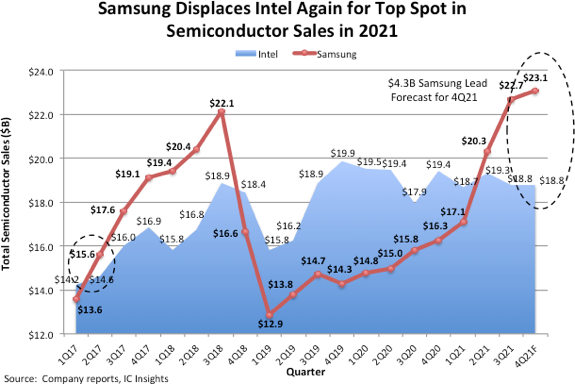 The 17 companies forecast to have worldwide semiconductor (IC and O S D—optoelectronic, sensor, and discrete) sales of more than $10.0 billion in 2021 (see Fig 1), according to IC Insights. The industry research group is updating its comprehensive forecasts and analyses of the IC industry for its 25th edition of The McClean Report, which will be released sometime this month. Throughout next year, the report will include updated quarterly rankings of the worldwide top-25 semiconductor suppliers.

Three semiconductor companies—AMD, NXP, and Analog Devices—are expected to join the noteworthy ‘megasuppliers’ list in 2021. These megasuppliers include nine suppliers headquartered in the U.S., three in Europe, two in Taiwan and South Korea, and one in Japan.

The list includes six fabless companies (Qualcomm, Nvidia, Broadcom, MediaTek, AMD and Apple) and one pure-play foundry (TSMC). In total, the megasuppliers’ sales are expected to jump by 26% in 2021 compared to 2020, one point greater than the forecasted total worldwide semiconductor industry 2021/2020 increase of 25%.