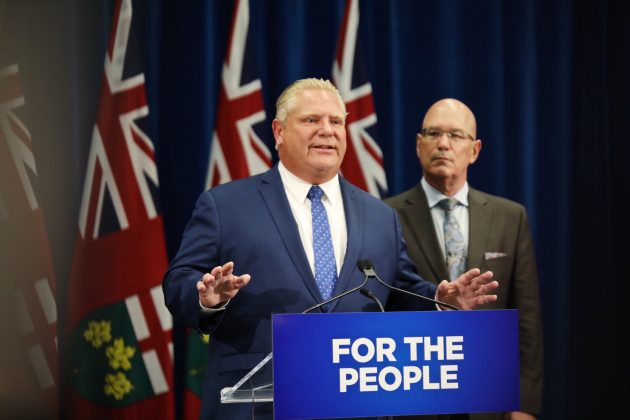 While he has been praised for his empathy during COVID-19, Doug Ford has received criticism for the government’s back to school plans PHOTO: Doug Ford/Twitter

Now into the third year of its mandate, the Ontario government under Premier Doug Ford is being assessed for its handling of the COVID-19 crisis. The impressions are mixed.

On a personal level, the premier’s responses to the pandemic have generally been regarded favourably. He has at times conveyed deep personal empathy for those affected by COVID-19 and their families.

At the same time, the province has struggled to provide effective responses to the COVID-19 crisis, seemingly uncertain of what direction to take or of the scope of its own authority and capacity.

Controversies over the government’s plans to reopen elementary schools without reducing class sizes are the latest in series of stumbles in managing the crisis.

The Ontario government was initially slow to recognize the scope of the pandemic and the risks it posed. COVID-19’s global spread was apparent by early March, yet the premier confidently advised Ontarians to “go away” and “have fun” over the March break holiday.

By the time a provincial lockdown was imposed on March 18, most of those travellers were already back in Ontario. Some brought the virus with them, where it began to spread into the community, most critically to long-term care facilities.

The disaster that ensued in long-term care centres has been well-documented. More than 1,450 long-term care residents have died of COVID-19. More may have perished due to neglect as portions of the care system, particularly in for-profit facilities, effectively collapsed.

The province was again slow to respond, despite well-known risks in the sector, especially its increasing reliance on part-time itinerant staff, and more general concerns over the quality and level of care being provided in long-term care facilities. Many of these issues had been highlighted less than a year earlier in the July 2019 report of the inquiry into the murders of nursing home residents by nurse Elizabeth Wettlaufer.

The province’s promise of an “iron ring of protection” for care facility residents failed. The government then studiously avoided a formal judicial inquiry into the COVID-19 care home disaster, opting for a less formal commission, which will lack public testimony, under oath, by key officials in system.

Early warning bells were also sounded around the potential risks to large numbers of temporary foreign farm workers employed in Ontario. Crowded, unsanitary living conditions, as well as the vulnerability to deportation for workers who lack permanent resident status if fired by their employers, were again well-known long before the arrival of COVID-19.

Yet the province failed to take proactive action, despite having substantial legal authority to set and enforce standards and practices for farm operators under occupational health and safety, public health and agricultural legislation.

Those responsibilities were left to the ad hoc efforts of local health units, most notably in Windsor-Essex. The result was more than 1,000 cases of COVID-19 among temporary farm workers and at least three deaths.

The government’s latest missteps have been around the reopening of schools in September. Major concerns are being raised by health experts, school boards, teachers and parents about the government’s approach to opening elementary schools.

The government seems to be proceeding on a largely business-as-usual model with normal, pre-pandemic class sizes. Personal protective equipment will be provided for teachers, and masks are required for students in grades 4 to 8, and are recommended for younger children.

But health experts and public health authorities have highlighted the need to reduce class sizes to control COVID-19 in schools. With smaller classes, any outbreak would be limited to a smaller group. Teachers are also far more likely to be able to manage the behaviour of their students in smaller classes.

The Ford government, overall, has presented an image of deep concern and empathy for the victims of the pandemic. But it’s flailing when it comes to delivering the kinds of concrete, proactive measures that COVID-19 requires. The premier’s own management style remains more like that of a city councillor — someone who is genuinely trying to help his constituents, but suggests he’s up against forces beyond his control.

This is an odd stance for a premier who once declared that he had “final sign-off on everything in this province.” At times the government has seemed unable to grasp the scope of the many tools at its disposal to deal with the pandemic.

The province is spending nearly $6 billion annually to keep hydro rates artificially low. In that context, it should be able to find the means to implement a safer and more effective plan for reopening public schools, where there are significant risks of triggering a second wave of COVID-19.

Despite its challenges in dealing with COVID-19, the province has been quietly efficient in the ongoing pursuit of its pro-business agenda. In fact, in many ways, that agenda has accelerated under the cover of the pandemic.

The land development industry continues to be a favourite of the government. Proposed revisions to the Growth Plan for the Greater Golden Horseshoe region released in June would compel municipalities to make land available to developers to accommodate doubtful projections of population growth to 2051.

The same proposed amendments would permit aggregate extraction operations (for example, gravel pits and quarries) in the habitat of endangered and threatened species. The province’s environmental assessment process, in place since the mid-1970s, was largely dismantled through the government’s omnibus “Economic Recovery Act” pushed through the legislature in July.

Where the government’s combination of empathy, administrative ineptitude and responsiveness to whatever developers and other industries seem to ask of it will lead is unknown. But that doesn’t serve the interests of Ontario residents very well. Nor does it provide a very strong basis on which to head into an election less than two years away.