Ebola strikes West Africa again: key questions and lessons from the past

February 19, 2021  by Mosoka Fallah, Part-time lecturer at the Global Health & Social Medicine, Harvard Medical School, and Lecturer at the School of Public Health, College of Health Sciences, University of Liberia 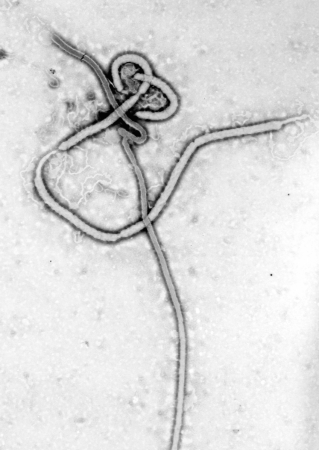 An electron micrograph of an Ebola viral particle showing the characteristic filamentous structure of a Filoviridae. PHOTO: CDC/ Dr. Frederick A. Murphy

News of a new outbreak of Ebola in Guinea is indeed distressing. The last in West Africa occurred between 2014 and 2015 and affected Liberia, Sierra Leone and Guinea. It was the world’s deadliest Ebola outbreak, which began in Guinea and in which more than 11,300 people died. Among these were over 500 health workers.

But countries in the West African region are in a very different position seven years on.

Liberia and Sierra Leone have already mobilised and activated their national response and preparedness plans. A clear indication that the political will is there.

Countries in the region also have the experience of the past, as well as new tools to tackle Ebola. They have an experienced workforce, laboratory systems are more developed and regional organisations, such as the Mano River Union – a regional economic and security body – and the Economic Community of West African States (ECOWAS) are more proactive.

For example, one of the outcomes of a 2018 planning meeting in Freetown, Sierre Leone, was to prepare for cross-border transmission. A whatsapp platform was developed that provided for real time tracking of outbreaks. It is now operational and is being used to transmit updates from Guinea to the surveillance and response teams from member countries.

However, as Pierre Formenty, the head of the World Health Organisation’s viral and haemorrhagic fever team, once pointed out to me: the worst mistake anyone can make about Ebola is to underestimate Ebola, or to think they know all about Ebola.

I’m an infectious disease expert and have led national response teams in previous Ebola outbreaks. A fundamental lesson I’ve learned is that the success of a control strategy is not based on the obvious information you have, but the subtle unanswered questions. I learnt this the hard way.

One particular incident has stayed with me. In early August, 2014, I met with Liberia’s WHO Representative who asked me how West Point was doing. West Point is Liberia’s largest slum and is located in Monrovia, Liberia’s capital. I said, with great confidence, that it was very quiet and had no ongoing Ebola transmissions. However, at that very time, there were active Ebola transmissions in the area and secret burials were happening in the early morning hours. The cases in West Point exploded.

It’s crucial to keep digging, and keep questioning. I’ve compiled a series of questions which are key to preparedness strategies, and which all countries in the region should address.

There are some key biological questions that those leading surveillance and contact tracing need to answer.

1) The first is: how long was the first case sick before they died?

Answering this question is crucial so that neighbouring countries
can trace possible times a sick person – or contact from the current cluster – may have come into their country. Many of the cases spread through the region in this way during the 2014 to 2015 outbreak. Many people crossed over to escape an outbreak or seek help.

Ebola does not kill within a day. The virus has an incubation period of between two and 21 days. People get progressively sicker as the virus multiplies in their bodies. Some studies from the previous outbreak in Guinea indicted an average of eight days from the onset of symptoms to death.

Having a timeline is crucial to understand who they might have passed the virus on to.

2) The second important question is: What was the source of infection? How did they get infected?

This helps surveillance teams identify whether the person was the index – or first case – and can identify their contacts. If this isn’t known it means the source of the infection is out there, and there could be multiple cases around.

Once the first case is infected, we know it spreads from human to human through direct contacts, fluids, dead bodies and contaminated materials from an infected person.

3) The final and most serious question is: what strain of Ebola is being dealt with?

Vaccines are available for the Ebola Zaire strain, but not for others. Reports I’ve received indicate that the current outbreak in Guinea is due to the Zaire strain.

There are also critical epidemiological questions that needs to be answered quickly too:

1) How many contacts – meaning people they came into contact with – has the first recognised case generated so far?

It is crucial to find 100% of the contacts. Missing just one can lead to an outbreak. This will require tracking movements, interviewing families, friends and places they might have sought treatment. This is where the complex detective work of contact tracing kicks in.

In the case of this recent outbreak in Guinea, infected persons had attended the burial of a nurse. Knowing this is vital because it allows the team to begin to map the potential spread of the disease.

In this case, the fact that it’s a funeral and that she was a nurse, indicates that this is a super-spreader event.

Funerals are often attended by relatives who might have travelled long distances to get there, and possibly even from other countries. Action can be taken on this basis – neighbouring countries are put on alert. In 2016 border checks worked. We were able to catch cases that had escaped from Guinea to seek refuge with relatives in Liberia.

The fact that she was a nurse points to a bigger, undetected outbreak.

2) What is the alert case’s demography? This includes age, ethnicity, occupation and economic activities.

For instance, in 2014, an infected case from Guinea, crossed over to Sierra Leone to seek care from a traditional healer among her ethnic group. This set the stage for the biggest outbreak in Sierra Leone which then spilled over into Liberia.

3) What were the person’s movements and how many places did the person visit when they became ill?

This includes hospitals, clinics and traditional healers. A transmission map must be built which examines all the possible movements and transmissions. If the index case moved using public transport, vehicle logs and movements for other passengers are needed.

In Liberia, we worked with transport unions, visited hospitals and pored over patient records. We worked with commercial motorbike riders to piece these complex transmission maps to determine the the total number of contacts, locations and status. The reason this is critical is that in the control of Ebola it is an “all or nothing principle”. You must reach 100% contacts and follow them up and ensure that none escape or get sick and die in the community. Otherwise, there’s a new transmission chain.

Until each of these very complex questions are answered, neighbouring countries should operate under the assumption that cases are in their countries. There is a already an alert of a suspected case in Liberia that came from Guinea.

The governments of these countries must sustain the high levels of alertness and preparedness they have initiated. Everything must be done to ensure Ebola doesn’t enter densely populated areas.

Surveillance must be carried out – especially in border towns. Symptoms surveillance teams must look out for include fever, headache, joint pain and redness of eyes. Surveillance activities should also screen for ethnic groups to which sick people belong. It’s better to pick up all potential cases, rather than risk missing one.

There should also be visits to all hospitals and clinics in bordering towns. Patient records must be checked.

Any medication and vaccines that can treat the disease must be on the ready to be deployed rapidly.

And finally, Ebola starts and ends in the community. It’s crucial to activate, educate and empower communities to say something and report something when they see something.