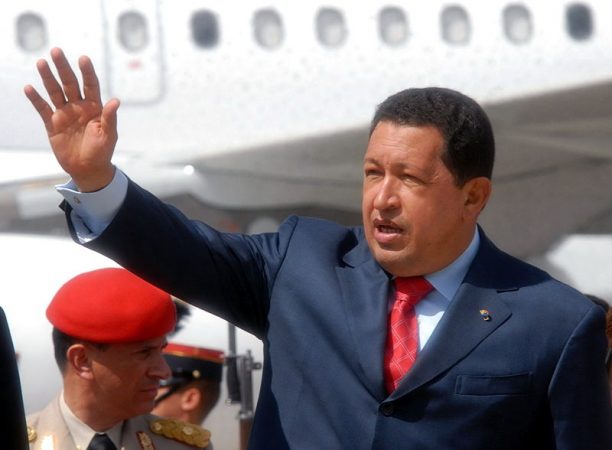 Hugo Chavez in Guatemala. In this era of “ocular politics,” a leader’s physical appearance can become a focus of public attention PHOTO: Wikimedia Commons

Winston Churchill, for example, preferred to keep his strokes secret in 1949, when he was head of the opposition, and in 1953 as British prime minister.

Others go for a bombastic manipulation of their ailments with the calculation of gaining momentum. With his COVID-19 infection, Donald Trump has chosen this option, as did the late president of Venezuela, Hugo Chávez, who died of cancer in 2012.

Both leaders represent two radical opposite ideologies. The conservative Trump is on the right of the political spectrum, while Chávez was on the far left. But the reality is much more nuanced than that.

Trump and Chávez express in their speeches and actions what I’ve defined as “grotesque transparency” — an excess of public disclosure that is so disruptive, it ends up dissolving the truth.

In this era of “ocular politics,” a leader’s physical appearance can become a focus of public attention. When the leader is no longer a physical representation of fitness and power, we often see two opposite attitudes from the media and the public. Either they want to confirm leaders are fit enough to fulfil their obligations as head of the government, or they want to prove that they’re the “fallen hero” who could not continue to carry the burden of the executive office.

Trump, as Chávez did when he was diagnosed with cancer, reacted to his COVID-19 infection by speeding up his return to the public stage and exaggerating — in action and rhetoric — his “total cure.”

The manipulation of magical thinking

Trump — again, just as Chávez did many times during his cancer ordeal — invoked supernatural intervention, calling his COVID-19 infection “a blessing from God that I caught it. This was a blessing in disguise.” He had the opportunity to ostensibly prove the efficacy of an experimental drug, Regeneron, and proclaimed:

“I want everybody to be given the same treatment as your president, because I feel great. I feel, like, perfect.”

The main difference between the Trump and Chávez cases is how each man presented himself physically to the public after their diagnoses.

Trump pushed for a quick release from the hospital, staging a heroic return to the White House. He climbed steps to the White House energetically, although with some breathing difficulties, did a military salute and, some days after, greeted people gathered below from the balcony of the presidential residence (something reminiscent of leaders like Argentinian General Juan Domingo Perón, the fascist dictator Benito Mussolini, Adolf Hitler and Chávez himself).

Chávez, on the other hand — particularly during the advanced stages of his cancer — presented himself as the suffering leader overcoming pain and frailty to plead to God for both a miraculous cure and victory in his last political battle — the presidential election of 2012.

But both leaders staged grotesque performances, using their diseases for political gain.

Trump transformed his COVID-19 infection into a campaign gimmick, disregarding all public health considerations and dismissing the seriousness of the pandemic.

Chávez used his cancer as an opportunity to compare himself to a suffering Christ carrying the cross, as well as assuming the role of the preacher during a Catholic Mass celebration.

Both leaders were careful to create the impression of “transparency” by suggesting to their supporters that they were disclosing all the details of their ailments and how they were confronting them.

The grotesque aspect of these performances — the desecration of democratic and religious conventions — enhances among their followers the impression of authenticity that Trump and Chávez sought to create as part of their political branding.

The broader dangers of grotesque transparency

Grotesque transparency affects people’s political decision-making and behaviour. These kinds of deceptive performances and speeches can be used as a prescription for radicalization, degradation of public civility, decline of democratic institutions and rituals, and even the justification of violence.

That’s why we should care about the use and abuse of this form of political communication in an era of superficial debates on social networks, social polarization and a culture more focused on visual images — reducing everything to a beautiful or shocking image — than it is on detailed and substantive arguments.

Populist leaders who manipulate this mode of communication fuel the suspension of reason, inflame those who are blindly partisan and produce “mutilated and confused ideas,” as the Dutch 18th-century philosopher Baruch Spinoza once said. Spinoza wrote in his treatise Ethics about “mutilated” ideas that cannot be articulated in a logical way, and are therefore “confused” because they tend to rely more on imagination than on reason — something both Trump and Chávez have used to their advantage.