‘Dancing’ fish could be key to ridding salmon farms of parasites 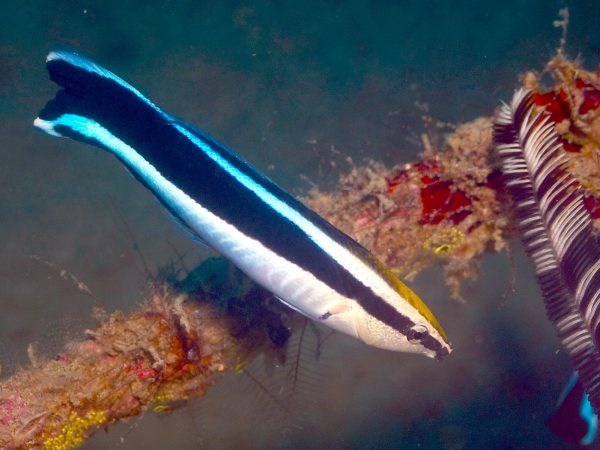 Biologists study the social behaviour of fish through their communication, which includes grunts, clicks and coordinated flatulence. Cleaner fish feed on the parasites that live on the skin of many different species of fish, known as clients.

Diving among the coral reefs of the Indo-Pacific — the geographic region comprising the Indian Ocean and the west Pacific Ocean — you might see a bluestreak cleaner wrasse, which is a highly intelligent species and perhaps the first fish to show self-awareness. This wrasse relies on cleaning parasites from clients to find the majority of its diet.

Attracting new clients and getting them to cooperate while removing parasites can be a difficult task. To make the job easier, bluestreak cleaner wrasse perform a complex dance and massage clients with their fins. This display relaxes the client, allowing the cleaner to approach and closely inspect its skin for parasites.

This is an example of mutualism because both parties benefit from interaction: the cleaner gets a meal and the client is rid of parasites. For decades, biologists have studied the behaviour of bluestreak cleaner wrasse to research mutualism, however, there are many other species of cleaner fish which are yet to be studied.

Investigating whether cold-water cleaner fish communicate with clients is particularly important for the salmon aquaculture business. Sea-lice are a huge economic, ecological and ethical problem for salmon farmers, and controlling louse populations is a big challenge.

To investigate this potential, our research team at the University of Guelph looked at how cunner wrasse communicated with salmon.

We filmed cunner wrasse, a native cleaner fish from eastern Canada, swimming inside aquariums with salmon to see how the two species interact. At first, we were disappointed not to see any underwater dancing, but then a particularly large cunner swam out in front of the salmon and made an unusual pose.

The cunner pointed down towards the floor, spread its fins open wide, and hung suspended in the water for a few brief moments before swimming away. Several minutes later it returned to strike another pose, this time for longer, and moving slowly around the salmon.

These results imply that cunner wrasse pose towards salmon as a form of communication, which helps the cunner gain access to lice on the salmon’s skin.

Cunner wrasse didn’t perform the complex ballet of their tropical counterpart, however, they displayed a series of highly exaggerated poses that was reminiscent of the voguing trend of the late 1980s.

This simpler dance style might reflect the fact that cunners can find alternate food sources, and don’t rely on eating parasites as much as bluestreak cleaner wrasse. Studying more diverse species of cleaner fish might give more insight on the biology of mutualism and fish communication.

It’s important to note than not every cunner showed posing behaviour and some individuals would hide from salmon, whereas others embraced the spotlight. Measuring differences in posing behaviours could help farmers choose the best cleaners to use for sea-lice control. It could also help identify factors that influence communication between cunner wrasse and salmon, like genetics and environment.