While calls for strategic voting will inevitably become louder as election day approaches, voters ought not be seduced or scared into substituting their sincere voting preferences. 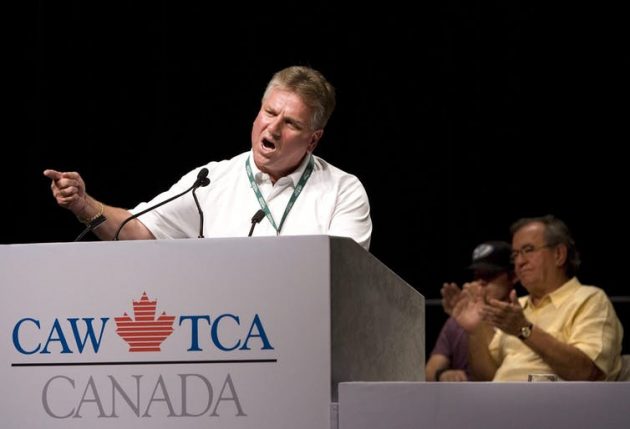 Newly elected CAW president Ken Lewenza gestures while giving a speech in 2008. The union’s efforts in 2008 and 2011 to stop Conservative victory were unsuccessful. THE CANADIAN PRESS/Chris Young

Labour unions and other progressive organizations in Canada have increasingly embraced strategic voting as a preferred strategy to defeat Conservative politicians. But as we approach the Sept. 20 federal election, it’s worth asking: Does the tactic really work?

Strategic voting occurs when a voter casts a ballot not for their preferred candidate, but for the candidate they think is best positioned to defeat their least desired candidate.

For many anti-Conservative voters with NDP sympathies, that has traditionally meant voting Liberal in districts where the Liberals and Conservatives are competitive, but New Democrats are weak. In the 2019 election, polls suggested as many as a third of Canadian voters cast their ballots strategically.

While most unions continue to endorse New Democrats in districts where the party is competitive, the labour movement as a whole has gradually shifted its electoral priorities away from exclusive partnerships with the NDP towards anti-Conservative strategic voting. This shift has primarily benefited the Liberals.

In a study of the 1999 Ontario provincial election, researchers concluded that it was difficult to gauge whether the co-ordination of strategic voting successfully altered individual voter behaviour. In my own research, evidence from union-backed strategic voting efforts revealed that the tactic has proven largely ineffective, if not counterproductive.

In the 2008 federal election, for example, the Canadian Autoworkers Union (CAW) targeted 40 “slim win” districts during the campaign where it believed strategic voting could help prevent a Conservative victory.

The CAW directly endorsed 10 Liberal candidates, nine New Democrats and one Green. In the remaining 20 “slim win” districts, the union urged people to vote for the candidate with the best chance of defeating the Conservative.

In virtually every case, that meant voting Liberal. Despite the union’s effort, Stephen Harper’s Conservatives were re-elected with a strengthened minority government and the opposition parties managed very few “slim wins.”

The Conservatives were victorious in 32 of the 40 seats identified for strategic voting, the NDP won five contests and the Liberals carried just three. No Conservative incumbents were defeated and the party lost only one seat it previously held. All 10 of the Liberal candidates directly endorsed by the CAW were defeated.

In the 2011 federal election, the union pursued a very similar strategy with similarly poor results. In seven districts, the union’s strategically endorsed candidate actually finished in third place, undermining the entire logic of the campaign.

One of those seats was Bramelea-Gore-Malton, where the CAW’s endorsement of a Liberal incumbent over an up-and-coming NDP candidate named Jagmeet Singh helped split the vote and allow the Conservatives to take the seat. Singh finished second, losing by just a few hundred votes.

Despite union leaders taking credit for the defeat of the Harper Conservatives in the 2015 federal election, electoral analyst Bryan Breguet has persuasively argued that “anybody but the Conservative” campaigns weren’t a determining factor in districts targeted for strategic voting in that election.

First, parties, unions and other progressive groups often don’t agree on which candidate is best positioned to defeat a Conservative. And in some cases, candidates will proclaim themselves as the strategic choice even when the evidence suggests otherwise.

Second, many voters interpret “strategic voting” to mean “vote Liberal” based on national polling or media reports. However, in districts like Oshawa, where Conservatives and New Democrats are traditionally the main contenders, such messages only sow the seeds of confusion and undermine efforts to co-ordinate strategic voting locally.

Third, strategic voting campaigns have proven ill-equipped at handling unexpected surges in party support mid-campaign that can change the dynamic in local races.

Take, for example, the 2015 strategic voting campaign of an organization called Leadnow, aimed at defeating Harper.

In more than 10 per cent of the districts identified by Leadnow for strategic voting, the organization’s preferred candidate actually finished third, largely because Leadnow failed to appreciate how Justin Trudeau’s surge in popularity in the latter half of that campaign was playing out at the local level.

In two B.C. Interior districts, Leadnow’s decision to back NDP candidates splintered the anti-Conservative vote in such a way that Conservative candidates retained both seats by relatively small margins over the second-place Liberal candidates.

Meanwhile, in districts where Liberal candidates were recommended by Leadnow, they did not significantly outperform projections based on forecasts using wider polling data.

Does it makes sense to vote strategically?

While calls for strategic voting will inevitably become louder as election day approaches, voters ought not be seduced or scared into substituting their sincere voting preferences, especially when the payout is so far from certain.

Despite the now widespread use of anti-Conservative strategic voting tactics, the effectiveness of co-ordinated campaigns is suspect.

In some cases, strategic voting efforts have not only failed to block the election of Conservative candidates, but counter-productively facilitated their election by confusing voters and further splintering anti-Conservative votes.