The Liberals’ efforts to hold onto progressive voters in the face of challenges from the NDP, Greens and the Bloc Québécois translated into an impressive menu of climate commitments. 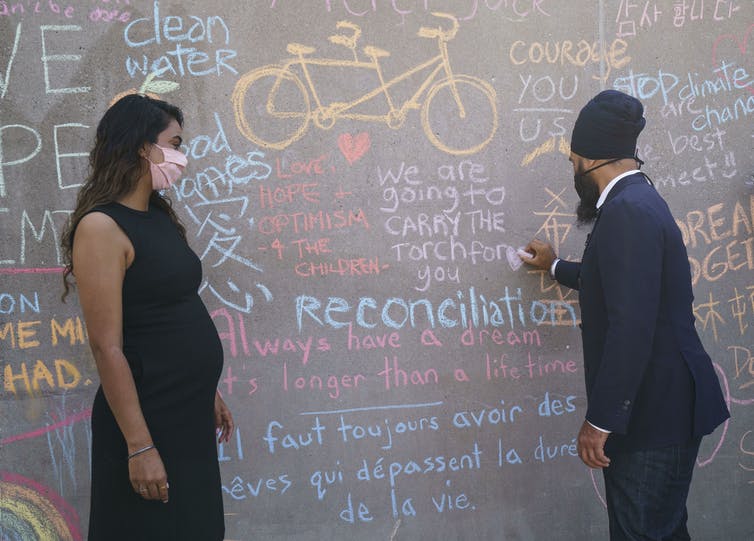 Despite a strong performance by NDP Leader Jagmeet Singh, the party failed to make any significant gains from progressive voters. THE CANADIAN PRESS/Paul Chiasson

The outcome of the recent federal election — a Liberal minority dependent on the NDP or Bloc Québécois for support — has been widely seen as having a “Groundhog Day” aspect to it. It left the composition of Parliament very much as it was before, reinforcing questions about the necessity of the election in the first place.

Yet the election has major implications for Canada’s approach to climate change and other environmental issues. Many progressives likely wanted the result: a Liberal government — but one they may not entirely trust to meet its promises on climate, child care and a host of other issues — reliant on more progressive parties to stay in office.

The overall outcome may have actually left Canada better positioned than before the election to make significant progress on reducing its greenhouse gas emissions.

The Liberals’ efforts to hold onto progressive voters in the face of challenges from the NDP, Greens and, in Québec, the Bloc Québécois, translated into an impressive menu of climate commitments.

Even before the election, the government expanded Canada’s commitment to lower greenhouse gases to a 40 to 45 per cent reduction by 2030 relative to 2005. (Canada’s previous target had been 30 per cent below 2005 levels.)

Canada has also said it will reach net-zero emissions by 2050. Under that scenario, the details of which have yet to be fully developed or modelled, any remaining greenhouse gas emissions would have to be balanced by the amounts absorbed by biological processes (such as growing trees) and carbon sequestration or storage technologies.

The government’s December 2020 climate policy paper proposed to increase the backstop federal carbon price to $170 per tonne by 2030. It is now expected to follow through on that.

The campaign produced a promise to ensure the oil and gas sector hits net-zero emissions by 2050, “with five-year targets starting in 2025.” There were also commitments to a 75 per cent reduction in fossil industry methane emissions from 2012 levels by 2030, and to “develop a plan to phase-out public financing of the fossil fuel sector, including from Crown corporations.”

About 17 per cent of Canada’s electricity comes from fossil fuels. In addition to the planned phase-out of conventional coal-fired electricity generation by 2030, a proposed “clean electricity standard” would bring the electricity grid to net-zero by 2035. Thermal coal exports would end by 2030.

Transportation is the second-largest source of greenhouse gas emissions in Canada. The federal government has accelerated its target so that every new passenger vehicle sold in 2035 and beyond is a zero-emission vehicle (ZEV). The commitments come with electric vehicle rebates of up to $5,000 for 500,000 buyers, plus 50,000 new charging stations across the country. And a low-carbon fuel standard would reduce emissions from gas-burning vehicles that remain on the road.

For homes and buildings, which account for about 13 per cent of Canada’s emissions, the government has promised $5,000 energy retrofit grants for nearly half a million households, with interest-free loans of up to $40,000 for deeper retrofits. There will also be a national strategy to bring the building stock to net-zero by 2050 with “ambitious milestones along the way.”

Following through will be crucial

The crucial question now will be the follow-though on these commitments. Many of the government’s promises, like the commitments to reduce fossil fuel and electricity sector emissions, could lead to significant federal-provincial conflicts, particularly with Alberta and Saskatchewan.

Over the past six years, the Liberals’ approach to addressing climate change has had some profound contradictions. The government purchased and approved the Trans Mountain pipeline, and it has supported controversial technologies like small modular nuclear reactors, carbon capture and storage, and fossil-fuel dependent “blue” and “grey” hydrogen.

To its credit, Prime Minister Justin Trudeau’s government had already implemented far more substantive climate policies than all of its predecessors, Liberal and Conservative, combined. The government’s minority status, dependent on two opposition parties with strong commitments to climate action, will help see these further commitments through to implementation, even if some say its pledges still fall short of what is needed to meet the revised emissions reduction targets.

The election also had significant implications for the other parties. The credibility of the Conservative party’s stance on climate change remains suspect, and is reinforced by the anti-environment legacy of the Stephen Harper government and the behaviour of current Conservative provincial governments in Alberta, Saskatchewan and Ontario. Support for the Green Party collapsed to its lowest level in two decades, yet the NDP failed to make any significant gains among progressive voters despite a relatively strong campaign performance by Jagmeet Singh.

The overall results have left Canada reasonably well-positioned to move forward on its climate commitments. The question now will be whether the re-elected Trudeau government will carry through on its promises. Its survival through the next federal election may well depend on the results.