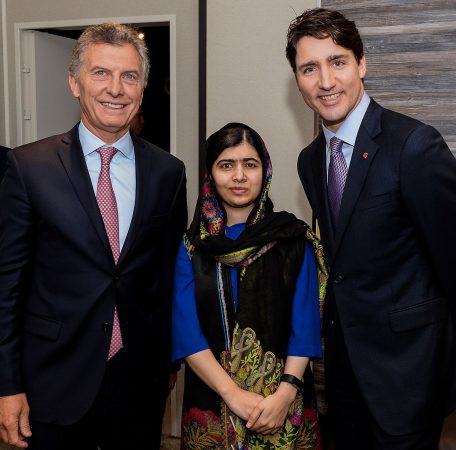 The COVID-19 crisis has shown that “things have to change,” he declared in the international spotlight, months after Canada’s unsuccessful bid for a seat on the UN Security Council. “Not just on the world stage, but at home, too.”

On the same day, Pakistani activist Malala Yousafzai, an honorary Canadian citizen and UN Messenger of Peace, reminded world leaders that the UN’s Sustainable Development Goals (SDGs) are the future.

Yousafzai, also a Nobel Peace Prize laureate, asked the leaders when they’re planning to do the work towards a “new sustainable, healthy, educated and equitable era.”

Trudeau’s speech to the United Nations was bold in tone and content. He highlighted several of the UN’s Global Goals — tackling climate change, inequality and health and women’s rights.

In September 2015, Canada and all UN member states adopted the 2030 Agenda for Sustainable Development, a universal call for action made up of 17 goals and 169 targets to be met by 2030. Canada’s commitment to the agenda, domestically and internationally, has been a top priority of Trudeau’s government.

But has it actually been a priority, or is it just “business as usual” in Canada?

Action is needed. Other SDG goals like clean water and sanitation, reduced inequalities and sustainable cities and communities remain daunting. The data is staggering. Canada must take action on all the other goals.

In 2017, a report authored by global economic development experts John W. McArthur and Krista Rasmussen concluded that Canada “is not yet fully on track for any of the SDGs.”

The British Columbia Council for International Cooperation (BCCIC) also offers a picture of SDG progress in Canada through its “Where Canada Stands” series that provides a snapshot of Canadian performance. The reports acknowledge that while Trudeau’s government is “already making an effort to integrate the SDG framework into a Canadian agenda in order to achieve the Global Goals,” Canada is still lagging behind in meeting many of the indicators.

The 2019 report states that several groups are still “left behind,” including Indigenous communities, families living in poverty, people with disabilities, and women and girls.

But the BCCIC also found that, domestically, Canada adopted its national strategy and took several actions to accelerate progress on the SDGs by 2030.

In December 2019, Trudeau reaffirmed Canada’s commitments to deliver international development assistance to reduce global poverty and inequality, provide humanitarian assistance, help the world’s poor adapt to climate change and support displaced people, particularly with access to education. These efforts are aimed at meeting the SDGs by 2030.

But in 2020, the world is facing the worst public health and economic crisis in a century.

Because of the impact of COVID-19, UN Secretary-General António Guterres launched a call for action called the SDG Moment 2020. In his opening remarks, he said:

“The 2030 Agenda for Sustainable Development is designed to address the very fragilities and shortcomings that the pandemic has exposed.”

Earlier this year, the UN called this decade a crucial Decade of Action to achieve the SDGs by 2030. Will 10 years be enough?

Despite slow progress on the SDGs, Canada is beginning to answer the call. In May 2020, Canada convened, along with Jamaica and the UN secretary-general, an event on development financing in the COVID-19 era with 50 heads of state and government. The event discussed how to overcome challenges in six areas. Among them was “ensuring a sustainable and inclusive recovery by aligning recovery policies with the Sustainable Development Goals.”

In late September 2020, Canada convened a second meeting on development financing in the COVID-19 era.

Even amid the COVID-19 pandemic, Canada is pursuing its international policy on sustainable development and scoring points on the world stage by leading the global support for recovery after COVID-19. It’s doing so by ensuring that the UN’s SDGs are not at risk during the pandemic.