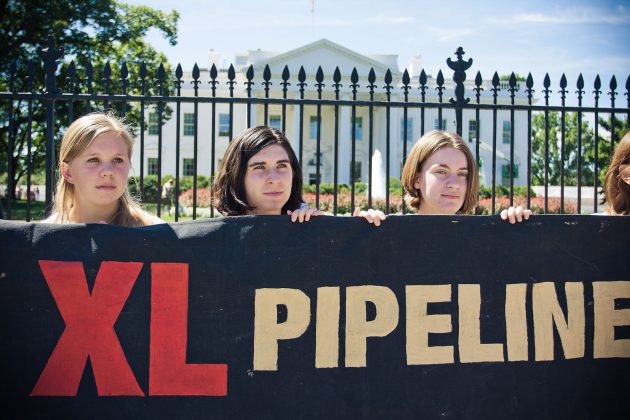 Despite Prime Minister Justin Trudeau’s recent comment that Canada and the United States will move forward after the cancellation of the Keystone XL pipeline project, the public debate on the fate of Alberta’s troubled bitumen sector still burns.

Back on Jan. 20, U.S. President Joe Biden reversed the approval of the project, fulfilling one of his election promises. Alberta Premier Jason Kenney called the decision a “gut punch.”

For environmental groups, the cancellation of Keystone XL reset American climate policy that had been hit hard by the Trump administration. More crucially, it was a “people-powered victory” following more than 10 years of grassroots action that drew on economic and legal means to stop the pipeline.

Their sustained political pressure was a notable contributing factor to Biden’s decision. Many members of the coalition against Keystone XL opted for direct confrontational tactics, such as marches, mass arrests, lockdowns and blockades that went beyond the strategies typically used by environmental groups.

Known as “blockadia,” these tactics have transformed the global climate movement in substantive ways — and it may surge once again after COVID-19 lockdowns are relaxed and lifted.

The rise of blockadia

Naomi Klein popularized the term “blockadia” in her book This Changes Everything. She writes that blockadia is the “roving transnational conflict zone […] where ‘regular’ people […] are trying to stop this era of extreme extraction with their bodies or in the courts.”

Beginning with a series of small direct actions that put emphasis on social justice to the environmental movement, Blockadia was a “web of campaigns” local activists launched against oilsands pipelines, including Keystone XL and the Northern Gateway in the early 2010s.

At the time, other social movements such as Idle No More were also using confrontational tactics to stop the flow of fossil fuels and disrupt the business-as-usual mode preferred by many big corporations. The movement established a new paradigm in mainstream North American environmentalism.

Conventional environmental campaigns are marked by eye-catching celebrity environmentalism, advocacy activities targeting law makers and “not in my backyard” movements motivated by local concerns. Although blockadia has incorporated these strategies, the spread and success of it indicates three major developments.

First, participants of blockadia think more in terms of what is legitimate than what is legal. Consequently, confrontational tactics and civil disobedience actions are legitimized by an “us versus them” framing. Blockadia is mobilized by a sense of planetary emergency, further radicalizing environmentalism.

Second, blockadia strives to combine environmental and social justice concerns. This is arguably why movements under this umbrella term have led to the formation of unexpected political coalitions. Consider, for instance, the alliance of ranchers and Indigenous communities formed during the fight against Keystone XL, as well as the solidarity with the Idle No More movement non-Indigenous peoples have expressed on social media.

Third, blockadia is decentralized. Despite outspoken activists like Naomi Klein and Bill McKibben, small local organizations brought together by shared environmental concerns drive the success of blockadia. Social media played a crucial role in coalition-building among these organizations.

In the case of transnational resistance to Keystone XL, organizations such as the Promise to Protect coalition are fighting together for globally minded local concerns. Their opposition is motivated by a range of things, from the threat of potential spills or the risk to local waterways, but they are all aware of the global implications of their local actions. In the words of environmental researcher Meike Vedder, the rise of blockadia indicates a shift from “not in my backyard” to “not on my planet.”

The future of environmental activism

The collective efforts of diverse groups have not only contributed to the delays and cancellations of high-profile pipeline projects like Keystone XL and Northern Gateway, they have been growing around the globe as well.

The Environmental Justice Atlas project, launched in 2015, has documented over 3,000 environmental conflicts around the globe. Many of them echo blockadia’s populist, pro-democractic push for fossil fuel divestment and a “just transition.”

Whether blockadia is able to fundamentally shift the dynamics of mainstream environmentalism remains uncertain. It will depend on the ability of blockadia-inspired actions to transform local concerns into broader quests for environmental and social justice.

The key lesson offered by the Keystone XL cancellation to Canadian energy politics is: if policies won’t address populist demands for radical departure from subsidizing the oil and gas sector, the public anger on climate inaction will carry on. Although blockadia began as an anti-Keystone XL campaign, it is likely to continue to disrupt the established policy discussions on Canada’s commitment to taking action on climate change.