Biden-Trudeau meeting caps two and a half centuries of Canada-U.S. relations

Working with American politicians, and managing the complex relationship, is a constant in Canadian politics and history 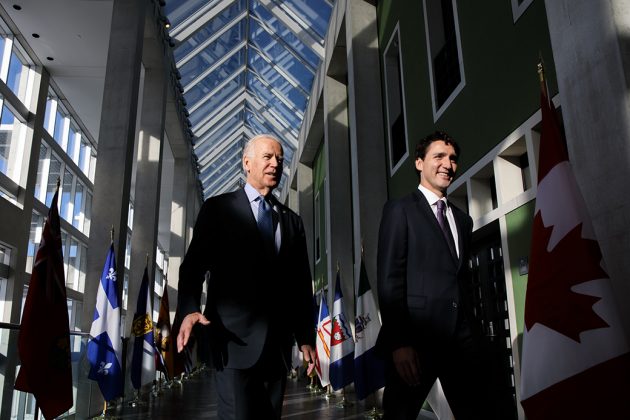 After four years of dealing with Donald Trump, Prime Minister Justin Trudeau has had his first meeting with U.S. President Joe Biden. For both individuals, and countries, the meeting marks a new beginning of Canada-U.S. relations. It was also Biden’s first bilateral meeting with a foreign leader since being elected.

Biden and Trudeau agreed to work together on areas of mutual interest, including climate action and the COVID-19 pandemic. The U.S. president pledged to help Canada secure the release of two Canadians imprisoned in China.

“Human beings are not bartering chips,” Biden said. “We’re going to work together to get their safe return. Canada and the United States will stand together against abuse of universal rights and democratic freedoms.”

Working with American politicians, and managing the complex relationship with our only neighbour, is a constant in Canadian politics and history. Indeed, Canada might not even exist but for the American Revolution in 1776.

The northern colonies that now comprise Canada offered safe haven to tens of thousands of British loyalists from the 13 southern colonies who opposed the War of Independence and the creation of a new republic.

These settlers had no interest in rejecting their ties to the monarchy and were enticed, and in some cases hounded by the patriots who supported the revolution, to migrate north.

During the War of 1812, their offspring, aided by British soldiers, marched south, invading the United States and setting fire to both the U.S. Capitol building and the White House.

British North America viewed with alarm the purchase of Alaska by the United States from the Russian Empire in 1867. Not coincidentally, just months before the U.S. took possession of Alaska, the colonists agreed to unite into one federation called the Dominion of Canada.

In creating their own country, the Fathers of Confederation had no hesitation in borrowing ideas from their southern neighbours, such as federalism with strong regional governments (provinces) and a reliance on a written constitution. Over the ensuing decades, more pages would be borrowed from the U.S. playbook, such as the value placed on free enterprise and an emphasis on individual rights.

Canada’s role as a safe haven for Americans by absorbing those who, for whatever reason, didn’t fit into American society and politics continued after the American Revolution.

Leading up to the U.S. Civil War in the 1860s, Canada offered an escape route for slaves. During the Vietnam War in the 1960s and 1970s, nearly 50,000 young Americans migrated to Canada to avoid being drafted.

‘Sleeping with an elephant’

Politicians in Canada are extraordinarily sensitive to American policy on everything from trade to continental defence. As former prime minister Pierre Trudeau once noted:

“Living next to [the U.S.] is in some ways like sleeping with an elephant. No matter how friendly and even-tempered is the beast, if I can call it that, one is affected by every twitch and grunt.”

Canada has also been in competition with the U.S. to attract the best immigrants from abroad. For most potential immigrants, the U.S. — with its large market and well-regarded educational institutions — has traditionally been more appealing than Canada, though that changed during the Trump years.

Canadian politicians devised a clever strategy to promote Canada to potential immigrants by reminding them they could come to Canada and retain their culture, unlike in the U.S.

Over the decades, Canada’s embrace of multiculturalism instead of insisting newcomers assimilate has effectively made it an attractive destination to highly qualified immigrants — and differentiated it from the U.S. and its melting pot system.

The role of Québec

Québec has played a key role in the Canada-U.S. relationship over the past 250 years, sometimes as an obstacle to any American aspirations of continental expansion. An attempt to invade Québec during the American Revolutionary War and make it the 14th American colony failed miserably in 1775.

More than three-quarters of Canadians live within 200 kilometres of the American border and have cultural lives not very different from their immediate southern neighbours.

The exception is Québecers, whose French language and cultural heritage is distinct from North American anglophone culture. Many Canadians outside of Québec could probably comfortably find a place within American culture, but not Québecers.

The danger to Canadian sovereignty these days is not U.S. politicians bent on military continental expansion as they were in the 1800s, but instead the gradually closer economic and cultural ties between the two countries.

At present, Canada-U.S. relations focus on economic relations, trade, tourism and climate change, with a sprinkling of broader geopolitical matters such as China.

Most in Canada see it as positive that Biden’s first meeting, albeit virtually, was with Trudeau. Nonetheless, Canadians have learned over more than two centuries to practise a degree of wariness toward their neighbour. The ties between the two nations may be enduring, but for many Canadians, maintaining them has involved a significant degree of endurance.