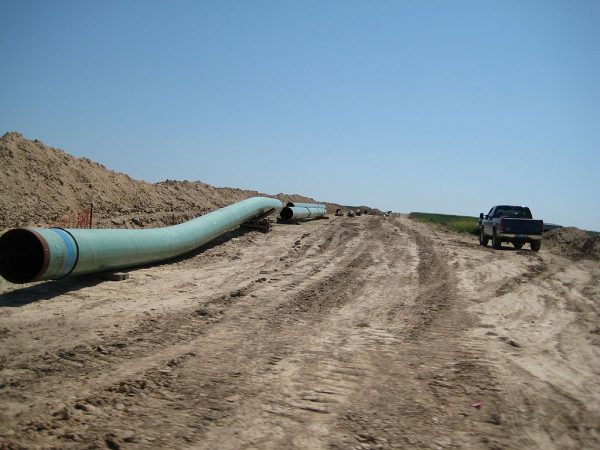 Joe Biden has supported policies that would limit greenhouse gases and set the U.S. economy on a path to a low-carbon future. PHOTO: shannonpatrick17 from Swanton, Nebraska, U.S.A., Creative Commons

U.S. Democratic presidential candidate Joe Biden recently reiterated his desire to stop the Keystone XL oil pipeline project. “I’ve been against Keystone from the beginning. It is tarsands that we don’t need — that in fact is a very, very high pollutant,” he said.

This is just the latest move in a long political game with respect to Keystone XL. In 2015, Vice-President Biden supported President Barack Obama’s decision to block the pipeline. After the 2017 election, President Donald Trump restored the project. If completed, the 1,900-kilometre pipeline would carry crude oil from Alberta to Nebraska, ultimately feeding refineries on the Gulf Coast.

Now Biden says he would shut it down again if he’s elected president in November. Canadians need to know that he is really making three arguments against the project, which may require Canada to re-examine its energy sector strategy.

Biden points to Canada’s oilsands as having “… very, very high pollutant” levels. There is some truth to this perception.

In the United States, the production of conventional oil and its transport to refinery gates produce about 7.1 grams of carbon dioxide equivalents of greenhouse gases for each megajoule of energy (CO2e/MJ). Shale oil compares favourably at 3.5-14 g CO2e/MJ, for production, but these figures do not include upgrading and transport, or refining. Long-term studies of Canadian oilsands surface mining suggest greenhouse gas (GHG) emissions range from 8.7 g CO2e/MJ to 15-23 g CO2e/MJ (the latter figures include upgrading).

The transport of the oil product to refineries in the U.S. increases the GHG emissions of Canadian oil to between 16-33 g CO2e/MJ, depending on the distance covered and whether the product is moved through pipelines (smaller footprint) or by rail (large footprint). When taken together, this shows that greenhouse gas emissions of oilsands production, upgrading and transport are at least four times greater than U.S. conventional oil.

Alberta and the oil industry have fought back against these negative perceptions. The Canadian Association of Petroleum Producers report that GHG emissions per unit of GDP have declined by 20 per cent since 2005, although total emissions from oilsands have more than doubled between 2000 and 2017. Alberta Premier Jason Kenney has invested $30 million into a “war room,” echoing past campaigns labelling oil from overseas as “conflict oil.”

The scientific literature has provided Canadian producers with some arguments to support oilsands production. For example, the relatively low GHG emissions of shale oil are counterbalanced by a host of negative impacts on water supply and quality, issues of geological instability and earthquakes, and growing concern about the longevity of shale operations.

Yet the Canadian energy sector is still perceived as a poor environmental performer. Earlier this month, Norway’s Sovereign Wealth Fund excluded key oilsands producers from its portfolio, and BlackRock, the world’s largest asset manager, also pulled out of oilsands companies in early 2020. Recent research found oilsands emissions may be up to 30 per cent higher than what the industry reports.

‘We don’t need’ that oil

Biden also suggested that the U.S. doesn’t need Canadian oilsands resources, a reflection of the dramatic shifts in U.S. oil production over the past decade. In 2010, the U.S. produced about five million barrels of oil per day, but it now has the capacity to produce 17.9 million barrels a day.

The current COVID-19 situation has further decreased the U.S. need for oil. As 2020 unfolds, investors are predicting oil production drops of up to 2.9 million barrels per day across the U.S. Much of produced oil is being stored, and oil storage capacity is rapidly filling up (or, perhaps not). Regardless, demand for gasoline and other oil products has reached its lowest point since 1971.

What will happen to oil demand as we exit the pandemic and the economy restarts? Some speculate that more and more people will work from home on a semi-permanent basis, giving governments licence to redesign roadways and increase active transit options.

Others warn that car travel may increase, sparking a resurgence in demand for gasoline and other refined oil products, and leading to declines in public transit use.

Biden’s comments emphasized the need to transition away from fossil fuels, echoing calls for a Green New Deal, championed by key Democrats such as congresswoman Alexandria Ocasio-Cortez.

The Green New Deal combines a series of goals including 100 per cent renewable energy, along with full access to health care and guaranteed wages. As one of the most senior Democrats to endorse the Green New Deal, Biden could be expected to support this movement should he win the White House.

But the Green New Deal may be a difficult sell in the post-COVID world. While renewable energy generation costs are increasingly cheaper, it is hard to compete against extremely low oil prices, and upgrading the grid to deliver renewable energy may result in higher electricity costs for consumers — something that may not be easy to manage during a major recession.

Very real concerns about energy poverty and inequality must be also be addressed within a Green New Deal — and it will take time to do this right. These concerns and challenges will buy countries like Canada time to adapt their own energy sector to better serve a rapidly changing market south of the border.

Biden’s words should lead Canadians to pause and reflect on the direction that the energy sector is going. Canadian companies depend on the international marketplace, and that marketplace is demanding cleaner energy products.

The U.S. has already become a major oil producer, and it’s left Canadian companies struggling. A Green New Deal will simply serve to accelerate these trends. Without significant change, Canada’s energy sector risks being left behind.