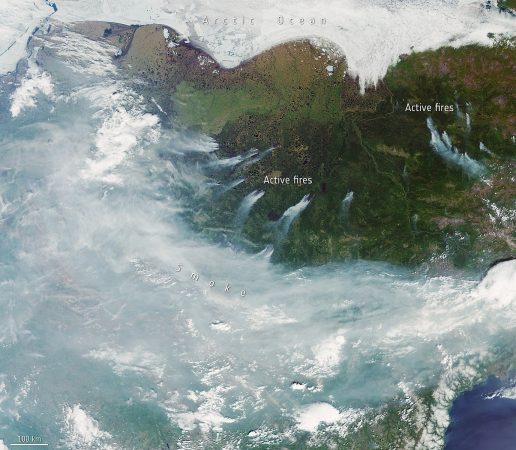 Siberia fires on 23 June by the Copernicus Sentinel3 mission.
Sea-ice can be seen to the north while smoke dominates the bottom part of the image with some active fires visible in the centre.
Sentinel-3 is a two-satellite mission to supply the coverage and data delivery needed for Europe’s Copernicus environmental monitoring programme. Each satellite’s instrument package includes an optical sensor to monitor changes in the colour of Earth’s surfaces. It can be used, for example, to monitor ocean biology and water quality. PHOTO: Wikimedia Commons

It was a grim record. On June 20 2020, the mercury reached 38°C in Verkhoyansk, Siberia – the hottest it’s ever been in the Arctic in recorded history. With the heatwaves came fire, and by the start of August around 600 individual fires were being detected every day. By early September, parts of the Siberian Arctic had been burning since the second week of June.

CO₂ emissions from these fires increased by more than a third compared to 2019, according to scientists at the Copernicus Atmosphere Monitoring Service. The wildfires produced an estimated 244 megatons of CO₂ between January and August, releasing thousands of years’ worth of stored carbon.

The summer of 2019 was already a record breaker for temperatures and fires across the Arctic. Seeing these events unfold again in 2020 – on an even larger scale – has the scientific community worried. What does it all mean for the Arctic, climate change and the rest of the world?

Even with climate change, the severe summer heatwave of 2020 was expected to occur, on average, less than once every 130 years. Wildfire observations in the Arctic are fairly limited prior to the mid-1990s, but there is no evidence of similarly extreme fires in the years before routine monitoring started.

Higher temperatures globally are likely to be driving the increase in wildfire frequency and duration. But modelling wildfires is difficult. Climate models don’t predict wildfires, and they cannot indicate when future extreme events will occur year-on-year. Instead, climate modellers focus on whether they are able to predict the right conditions for events like wildfires, such as high temperatures and strong winds.

And these climate model projections show that the kind of extreme summer temperatures we’ve seen in the Arctic in 2020 weren’t likely to occur until the mid-21st century, exceeding predictions by decades.

So even though an increasing trend of high temperatures and conditions suitable for wildfires are predicted in climate models, it’s alarming that these fires are so severe, have occurred in the same region two years in a row, and were caused by conditions which weren’t expected until further in the future.

So what is causing this rapid change? Over recent decades, temperatures in the most northerly reaches of Earth have been increasing at a faster rate than the rest of the world, with the polar region heating at more than twice the rate of the global average.

The fires caused by these hot, dry conditions are occurring in remote and sparsely populated forests, tundra and peat bogs, where there is ample fuel.

But these extreme events are also providing worrying evidence of climate “feedback loops”, which were predicted to happen as the climate warms. This is where increasing concentrations of greenhouse gases in the atmosphere contribute to further warming by promoting events – like wildfires – which release even more greenhouse gas, creating a self-perpetuating process that accelerates climate change.

Record CO₂ emissions released from burning Arctic forests during the summer of 2020 will make future conditions even warmer. But ash and other particulates from the wildfires will eventually settle on the ice and snow, making them darker and accelerating their melting by reducing how easily their surface reflects sunlight.

Climate change is not the direct cause of this summer’s fires, but it is helping to create the right conditions for them. The extreme temperatures and wildfires seen throughout the Arctic in 2020 would have been almost impossible without the influence of human-induced climate change – and they are feeding themselves.

What about the rest of the world?

When we think of the Arctic, we don’t tend to picture wildfires and heatwaves – we think of snow and ice and long, brutal winters. Yet the region is changing before our eyes. It’s too early to say whether the last two summers represent a permanent step-change, or new “fire regime”, for the Arctic. Only observations over a much longer timescale could confirm this.

But these record-breaking events in the Arctic are being fuelled by human influences that are changing our world’s climate sooner than many expected. With climate models predicting a future where already hot and fire-prone areas are likely to become more so, 2020’s record temperatures paint a worrying trend towards more of the same.

The Arctic is at the frontline of climate change. What we are witnessing here first are some of the most rapid and intense effects of climate change. While the impact is devastating – record CO₂ emissions, damaged forests and soils, melting permafrost – these events may prove to be a portent of things to come for the rest of the world.