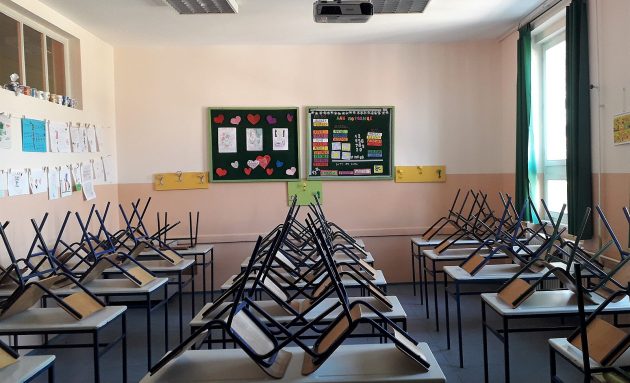 It’s not yet clear how the federal government’s Aug. 26 announcement of allotting $2 billion to support safe school openings will change provinces’ existing plans. With many schools poised to start soon, some leaders across Canada have been struggling to convince a skeptical public that reopening schools is safe.

Alberta, with the highest per capita active case rate in the country, is a case in point.

Premier Jason Kenney and Education Minister Adriana LaGrange are trying to convince Albertans that schools should reopen under near-normal conditions, insisting that the recommendations of Alberta’s Chief Medical Officer, Dr. Deena Hinshaw, are being followed.

While the province has put enhanced hygiene measures in place, including masks for students Grade 4 and up where social distancing isn’t possible, per student funding is actually down from pre-pandemic levels.

No provincial funding has been provided to reduce class size. According the most recent estimates, in some schools, classes can be as large as more than 30 students, particularly in high school. The Calgary Herald reported LaGrange said officials are “reviewing the program details” of Canada’s recent announcement of $262 million to Alberta. However the province allocates these funds, more disclosure about priorities and decisions is warranted.

If the province is making data-driven decisions informed by expert advice, then the data and consultative process backing choices should be made transparent. If science, realism and high-quality problem-solving are at hand, people will probably trust decision-making more; research indicates that the public has greater trust in data that can be openly accessed and is vetted by independent review.

Perhaps not surprisingly, 72 per cent of Alberta parents are worried about children returning to school, and up to 48 per cent say they will keep their children at home rather than risk infection, according to a web survey conducted by polling and marketing research firm Leger. The survey was conducted with a representative sample of 1,510 Canadians.

Right now, the public has been given little information on the science being used to shape provincial policy, other than summaries of general information. The province has released limited information about international school reopenings held up as successful (Sweden) and no epidemiological modelling. Alberta officials have also failed to explain how and why some studies that might appear to call into question current recommendations are apparently discounted — such as recent research indicating children may be more active COVID-19 spreaders than previously believed.

And although LaGrange has suggested she is in dialogue with “education partners” and on Aug. 19 she publicized a meeting with the Alberta Teachers Association (ATA), no named advisory committee appears to be guiding the reopening, despite calls for such a body by the ATA at the beginning of August.

LaGrange should disclose the epidemiological models used to anticipate consequences of both the current reopening plan and several alternatives, so they can be accurately compared.

The public has the right to hear how Alberta’s plan incorporates up-to-date data, verified by districts, about realities in schools. These include factors like class and room sizes; data on which mitigation measures such as smaller class size, better ventilation or medical-grade PPE for teachers could help stem viral spread and their costs. Where good data about the consequences of reopening don’t yet exist, there should be transparency, too.

We should also know what experts have been consulted, what concerns, ideas and recommendations they generated and how these were addressed and evaluated.

These times require out-of-the box thinking to consider solutions ranging from outdoor schooling to using surplus community space and changing the number of hours of in-person instruction — but if leaders don’t investigate innovative solutions, they’re unlikely to find them.

If no one but the chief medical officer was consulted, then it is high time this happens, even if it means postponing the first day of school, as British Columbia is doing.

Transparency about data and expert recommendations are vital to an informed public. Transparency allows discussion and critique, and allows concrete conversation about risks the public is being asked to accept.

What is the prospect that children, family members or teachers will be hospitalized or die? What are best- and worst-case scenarios in terms of resultant casualties and community spread? The public should know what risks or potential costs everyone is being asked to bear.

Transparency also allows parents to make informed choices and to develop a sense of confidence in how decisions are made not only now, but going forward.

Israel, for example, failed to reduce class size and saw an outbreak at a high school when schools reopened that infected hundreds. There were instructions for mask-wearing by students in Grade 4 and older, open windows, frequent hand washing and physically distancing students when possible. But with up to 38 children in classrooms, physical distancing was impossible, and under a heat wave, officials permitted windows closed for air conditioning and allowed a mask-wearing exemption. Are similar outcomes or decisions possible in Alberta?

So far, parents have been told only to expect some cases in reopened schools.

Transparency also matters as it allows people to evaluate whether plans address and fund ethical requirements pertaining to school staff: adequate provisions so reopenings work logistically, adequate protection that ensures reopenings are maximally safe and adequate compensation for staff who are assuming risks.

We need answers to questions such as: How much does teachers’ risk increase in classrooms where social distancing cannot be maintained? Given risks, is hazard pay in order for school staff? If it isn’t — hopefully because projected risks are low — then how about a provincial payout for those who may nonetheless suffer serious illness or death in conjunction with a COVID-19 school outbreak?

That seems only fair and could contribute to confidence in what to expect.

In the end, transparency allows us to hold leadership accountable. Politicians and scientists can be wrong. If the public knows what the province’s projections are and accepts them, then it can be prepared for predicted bumps without losing trust in leadership. If the models turn out to be inaccurate or ethically unacceptable, the public deserves a change in course.