After wildfires, logging the forest can harm wildlife for up to a decade

Burnt trees can be logged and turned into timber and other wood products, but removing them from the forest can have negative impacts on the wildlife 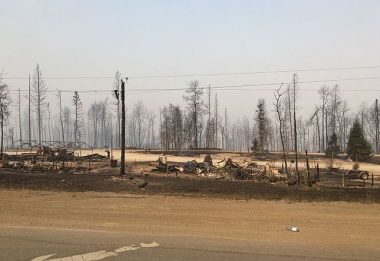 Wildfires have broken many records in the western United States and Canada in the past three years, including the devastating fires that blackened large areas and burned hundreds of buildings in California, Oregon and Washington in September 2020.

Wildfires fundamentally change forests, and they are a natural feature in forested ecosystems around the world. Many species of plants and animals have adapted to the fire regimes of their ecosystems, such as lodgepole pine trees, which germinate more readily after fire, and many woodpeckers that use recently burned forest to forage for bugs and build nests.

However, wildfire is often at odds with human interests, because fires burn trees that might have otherwise been cut down by logging companies. In British Columbia, post-fire salvage logging is often used to recoup the economic losses that come with wildfire, by harvesting the logs for lumber, plywood and pulp.

As researchers who have studied post-fire salvage logging in the Cilcotin Plateau in central B.C., we’ve found that these operations are often much larger and more severe than standard logging practices, and can have negative impacts on wildlife — sometimes lasting for as long as a decade.

No red squirrels or snowshoe hares

Our research focused on the prey species that live in these forests — snowshoe hares, red squirrels, mice and voles — and are important food for owls, lynx, marten, fisher and coyotes. Salvage logging led to fewer prey species and lower prey abundances for up to a decade after the fire compared to prey populations in sites that were burned but not salvage logged.

The loss of regenerating post-fire habitat to post-fire salvage logging becomes more concerning when considering the scale and timeline of the logging operations. Post-fire salvage logging often occurs quickly following fire as harvesters attempt to get timber to the market before it decays and loses value. As wildfires are often seen as detrimental by society, harvesters take more post-fire timber from larger areas of land than during standard logging.

For example, in 2017, B.C. experienced its largest wildfire season in history, with more than 1.2 million hectares of forest burned. The following year, that record fell, with 1.3 million hectares burned. With that much land burned, there was a large potential for post-fire salvage logging to impact millions of hectares.

These massive shifts in prey base will almost certainly also affect the forest predators and raptors that require these small mammals as their prey, leading to a large shift in wildlife communities. In related work, we have seen that lynx, marten, fisher and coyotes all shift behaviour and abundance in relation to fires and post-fire salvage.

Salvage logging was clearly detrimental to the majority of small mammals, and our results suggest that current post-fire practices should be changed.