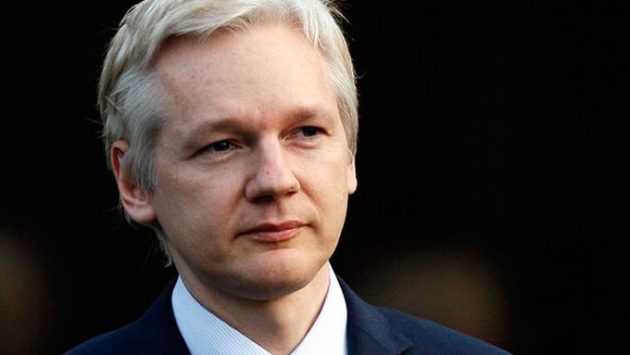 WASHINGTON – The Justice Department inadvertently named Julian Assange in a court filing in an unrelated case that suggests prosecutors have prepared charges against the WikiLeaks founder under seal.

Assange’s name appears twice in an August court filing from a federal prosecutor in Virginia, who was attempting to keep sealed a separate case involving a man accused of coercing a minor for sex.

In one sentence, the prosecutor wrote that the charges and arrest warrant “would need to remain sealed until Assange is arrested in connection with the charges in the criminal complaint and can therefore no longer evade or avoid arrest and extradition in this matter.” In another sentence, the prosecutor said that “due to the sophistication of the defendant and the publicity surrounding the case, no other procedure is likely to keep confidential the fact that Assange has been charged.”

Any charges against Assange could help illuminate the question of whether Russia co-ordinated with the Trump campaign to sway the 2016 presidential election. It would also suggest that, after years of internal wrangling within the Justice Department, prosecutors have decided to take a more aggressive tact against the secret-sharing website.

It was not immediately clear why Assange’s name was included in the document, though Joshua Stueve, a spokesman for the Eastern District of Virginia – which had been investigating Assange – said, “The court filing was made in error. That was not the intended name for this filing.”

The Washington Post reported late Thursday, citing people familiar with the matter, that Assange had indeed been charged. The Associated Press could not immediately confirm that.

It was not immediately clear what charges Assange, who has been holed up for years in the Ecuadorian Embassy in London, might face.

But recently ousted Attorney General Jeff Sessions last year declared the arrest of Assange a priority. Special counsel Robert Mueller has been investigating whether Trump campaign associates had advance knowledge of Democratic emails that were published by WikiLeaks in the weeks before the 2016 election and that U.S. authorities have said were hacked by Russia. Any arrest could represent a significant development for Mueller’s investigation into whether the Trump campaign co-ordinated with Russia to influence the election.

Barry Pollack, a lawyer for Assange, told the AP earlier this week that he had no information about possible charges against Assange.

In a new statement, he said, “The news that criminal charges have apparently been filed against Mr. Assange is even more troubling than the haphazard manner in which that information has been revealed. The government bringing criminal charges against someone for publishing truthful information is a dangerous path for a democracy to take.”

The filing was discovered by Seamus Hughes, a terrorism expert at the Program on Extremism at George Washington University, who posted it on Twitter hours after The Wall Street Journal reported that the Justice Department was preparing to prosecute Assange and said, “To be clear, seems Freudian, it’s for a different completely unrelated case, every other page is not related to him, EDVA just appears to have assange on the mind when filing motions to seal and used his name.”

Assange, 47, has resided in the Ecuadorian Embassy for more than six years in a bid to avoid being extradited to Sweden, where he was wanted to sex crimes, or to the United States, whose government he has repeatedly humbled with mass disclosures of classified information.

The Australian ex-hacker was once a welcome guest at the Embassy, which takes up part of the ground floor of a stucco-fronted apartment in London’s posh Knightsbridge neighbourhood. But his relationship with his hosts has soured over the years amid reports of espionage, erratic behaviour and diplomatic unease.

Any criminal charge is sure to further complicate the already tense relationship.

Ecuadorian officials say they have already cut off the WikiLeaks founder’s internet, saying it will be restored only if he agrees to stop interfering in the affairs of Ecuador’s partners – notably the United States and Spain. Officials have also imposed a series of other restrictions on Assange’s activities and visitors and – notably – ordered him to clean after his cat.

With shrinking options – an Ecuadorian lawsuit seeking to reverse the restrictions was recently turned down – WikiLeaks announced in September that former spokesman Kristinn Hrafnsson, an Icelandic journalist who has long served as one of Assange’s lieutenants, would take over as editor-in-chief.

WikiLeaks has attracted U.S. attention since 2010, when it published thousands of military and State Department documents from Army Pvt. Chelsea Manning. In a Twitter post early Friday, WikiLeaks said the “US case against WikiLeaks started in 2010” and expanded to include other disclosures, including by contractor Edward Snowden.

“The prosecutor on the order is not from Mr. Mueller’s team and WikiLeaks has never been contacted by anyone from his office,” WikiLeaks said.