A republican lawmaker admitted political donors want a massive tax-cut package to reduce rates on corporations, while a lobbyist said Washington is fixated on tax cuts and as long as that issue is alive, expect a holding pattern on NAFTA 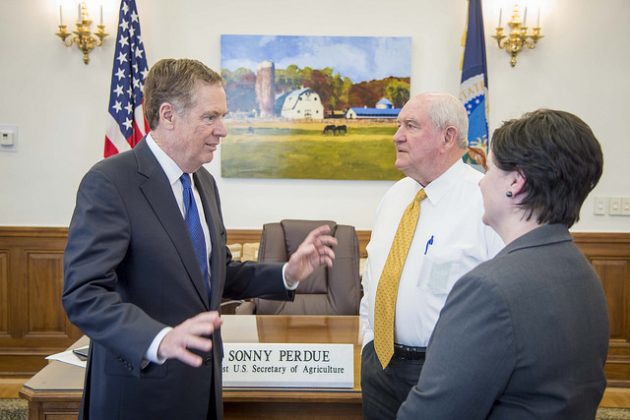 WASHINGTON—A U.S. lawmaker dropped a remark this week that illustrated how NAFTA is not the No. 1 economic priority in Washington these days, obscured by another paramount prerogative.

That issue is tax cuts.

As America’s neighbours wonder whether the U.S. Congress might take a strong public stand against the cancellation of the three-country, free-trade agreement, a candid crack from Chris Collins made clear another economic file is causing cold sweats.

The Republican admitted he’s under pressure from his political donors to pass a massive tax-cut package, which would reduce rates on corporations and most Americans and give the wealthiest especially huge benefits by ending the estate tax.

“My donors are basically saying, ‘Get it done or don’t ever call me again’,” said the New York congressman, an early Donald Trump supporter.

That comment drew scorn from opponents as evidence that Republican priorities lie in catering to their rich political patrons. But it also underscored something that is apparent to the save-NAFTA crowd: right now, Congress’s attention lies elsewhere.

A visiting Canadian delegation noticed it.

”In every conversation we had with people, they made very clear there’s a lot of other files on the table that are important,“ said MP Bob Nault, who led a Washington visit by the Commons foreign affairs committee. ”Tax reform is a big issue—that was clear.”

It was the same with Washington’s business lobby. Nault said it clearly supports NAFTA but is wary of rocking the boat: ”There’s another issue the business community likes about Trump—the tax reform. (Their attitude is), ‘We sort of don’t want to bite the hand that feeds us’.“

The NAFTA and tax issues are clearly intertwined.

One well-connected lobbyist and one pro-business group in Washington have told The Canadian Press that the capital is fixated on tax cuts and as long as that issue is alive, expect a holding pattern on trade.

A series of trade decisions have been put off, like whether to scrap the U.S.-Korea agreement, impose tariffs on China and even NAFTA has had its timeline punted off into the distance, with an anticipated year-end target for a deal pushed to next spring.

One trade-watcher suspects American lawmakers will never take a hard stand on trade.

Some people are counting on Congress to pass a law reaffirming support for NAFTA, or insisting on a thorough study before any U.S. pullout, to delay the process, but Bill Reinsch, the just-departed head of the National Foreign Trade Council, is skeptical.

His prediction: If Trump moves to cancel NAFTA, Congress will make noise, then do nothing. He just doesn’t see the necessary two-thirds votes for any measure that would override a Trump veto.

”There’d be a lot of fussing and a lot of rhetoric and maybe a bill or two introduced, but I don’t think that there is a critical mass prepared to act in defiance of what the president decides to do,” Reinsch told a recent gathering at the Cato Institute.

”They are very clearly reluctant, with a couple of notable exceptions … to oppose the administration publicly. They’re concerned about the political risk of being attacked by the populist right. … They’re worried about being primaried. And in the Republican party you kind of go against your president at your peril. They don’t like to do that.”

For now, there’s an uneasy truce amid the tax push.

It was illustrated in two reports this week by Inside U.S. Trade. The publication said leaders of the Senate and House of Representatives have told the business community they won’t stand up to Trump on trade, partly for fear of distracting from the tax bill.

It also reported that pro-trade members of Trump’s team like Vice-President Mike Pence, chief of staff John Kelly and Agriculture Secretary Sonny Perdue have tried to keep Trump focused on the tax reform effort and divert his attention from scrapping trade deals.

”They’re telling the White House, ‘Don’t do anything to rock the boat on trade while the tax bill’s going on, because we want to get the tax bill finished’,“ Reinsch told the Cato conference.

”I think it’s fair to say you probably won’t see any apocalyptic event in NAFTA … until after the tax-bill situation is clarified. The Republicans are very nervous that one of these things is going to get in the way of the other.”

He cited another possibility for NAFTA—that of a never-ending, inconclusive, Mexican standoff.

Here’s how Reinsch describes that potential scenario: ”A bizarre form of circular firing squad, where all three countries are standing there glaring at each other, guns pointed and nobody is willing to pull the trigger (to cancel NAFTA). But nobody is willing to agree to anything either. So the talks just continue. And maybe we say we’re going to withdraw, and we don’t. … The trigger never gets pulled, and this thing goes on indefinitely.”