As climate change pushes the ice a little farther north each year, the Arctic is awash with talk of a new gold rush for abundant natural resources, prized shipping routes and tourism 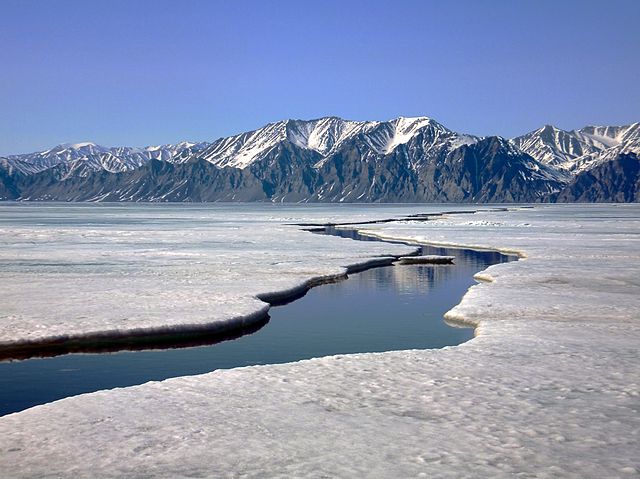 The opening of shipping routes could put Canada at odds with other Arctic claimants. PHOTO: Paul Gierszewski/Wikimedia

LANCASTER SOUND, Nunavut—From a distance, the northern shores of Baffin Island in the Arctic appear barren—a craggy world of snow-capped peaks and glaciers surrounded by a sea of floating ice even in the midst of summer.

Yet beneath the forbidding surface of the world’s fifth largest island lies an exceptionally pure strain of iron ore, and the Baffinland mine is believed to hold enough of it to feed smelters for decades.

As climate change pushes the ice a little farther north each year, it is spurring talk of a gold rush in the remote Arctic for abundant natural resources, prized shipping routes and business opportunities in tourism and fishing. The Arctic, including the fabled Northwest Passage between the Atlantic and the Pacific, is among the last regions on earth to remain largely unexplored. In April, U.S. President Donald Trump signed an executive order to reverse Obama-era restrictions on oil drilling.

However, experts say there remain many obstacles to reaping the riches once blocked by the ice.

The Associated Press took a first-hand look at the region on a month-long, 10,000-kilometre (6,200-mile) journey aboard the Finnish icebreaker MSV Nordica, along with researchers specializing in Arctic development.

“As the world demand for raw materials is ever increasing, and (with) a realization that a large part of the unexplored deposits are in the Arctic, there is a natural shift to focus on that area,” said Mads Boye Peterson, head of Denmark’s Nordic Bulk Carriers Shipping.

Peterson’s company sent a freighter through the Northwest Passage four years ago to show the route can be used to haul cargo in summer. However, he also noted that rising temperatures make operations harder because moving floes are less predictable than unbroken sheets of ice.

“On the surface it might look like a slam dunk,” he said. “But it’s actually a lot more complicated than just something you decide to do overnight.”

The U.S. Geological Survey has estimated that up to 30 per cent of the world’s undiscovered gas and 13 per cent of oil waiting to be found are inside the Arctic Circle. Precious minerals also slumber beneath the icy surface, along with rare earth elements, lithium and cobalt, used in batteries for electric cars and handheld devices, said Morten Smelror, director of the Geological Survey of Norway.

“The Arctic is certainly among the last frontiers with respect to undiscovered mineral resources, along with the deep oceans,” said Smelror.

The geography also opens up new opportunities. Sailing through the Northwest Passage could potentially cut the distance from East Asia to Western Europe by more than 10,000 kilometres (6,200 miles), compared with the traditional route through the Panama Canal, offering huge fuel savings.

The battle for the Arctic is being fought by geologists and legions of lawyers.

Greenland has staked its claim to the Lomonosov Ridge beneath the Arctic Sea, which would greatly extend its rights to the sea bed for possible mining. Russia contests the claim. Russia boldly planted an underwater flag at the North Pole 10 years ago, and has been expanding infrastructure along its northern coast.

Canada contends the Arctic archipelago’s waters are its internal waters, and has stepped up its presence in the region, including creating a new Arctic research centre. The United States contests Canada’s claim, which would give Ottawa the right to stop ships from freely travelling through the Northwest Passage.

Some smaller firms are pressing ahead. The Alaska-based company Quintillion is laying a fiber optic cable through the Northwest Passage to provide high-speed Internet traffic to local communities and an additional link between London and Tokyo.

The growth in adventure tourism and the lengthening summer season have also produced a surge of traffic. Last year, the cruise ship Crystal Serenity with 500 crew and 1,100 passengers paying at least $22,000 each sailed through the passage. Part of the revenue goes to local communities whose hunting grounds and travel routes might be disrupted.

Some Inuit are hoping for new economic opportunities from the region’s growing fishing industry.

Climate change is even opening new avenues in agriculture. Mette Bendixen, a climate researcher at the University of Copenhagen, projects that global warming will extend the growing season by two months.

“Not many people know that potatoes, strawberries are grown in southern Greenland,” he said.

Despite its promise, several challenges are holding back Arctic development.

The search for fossil fuels above North America has slowed in recent years, partly because of low oil prices and public pressure. Shell relinquished most of its federal offshore leases in Alaska’s Chukchi Sea last year, after pouring billions of dollars into exploration efforts. Former Shell leases in the neighbouring Beaufort Sea have been taken over by an Alaska Native-owned company.

And only 10 per cent of the Northwest Passage is surveyed to the highest modern standards, meaning uncharted shallows could pose a serious risk to shipping.

Ocean currents are predicted to push polar pack ice into the passage for decades, limiting the route to sturdy vessels with experienced navigators _ and keeping insurance costs high.

“Think about a high mountain pass that is closed for half the year, has no gas stations, convenience stores or repair facilities,” said Andrew Kinsey, a senior marine risk consultant at insurance giant Allianz. “Is this the route that you want to use for your daily commute?”

Environmental concerns and a growing acceptance of the indigenous population’s rights have held back some plans for Arctic exploration. Cargo hauls to the Baffinland iron ore mine are already restricted to August to mid-October, so as not to disrupt the Inuit’s ability to cross the ice to hunt, fish or trade.

Daria Gritsenko, a public policy researcher on board the Nordica, also cautioned that melting permafrost poses a problem for Arctic infrastructure.

“We need to rethink how we build things in the Arctic,” said Gritsenko, who is based at the University of Helsinki. “Even if we develop a tremendous system of Arctic ports, how would the goods get there? That’s the irony of climate change.”