The Trump administration has extended Beijing an olive branch by scrapping a decision to impose investment curbs on China, but there is no quick resolution to the dispute between the world's two largest economies 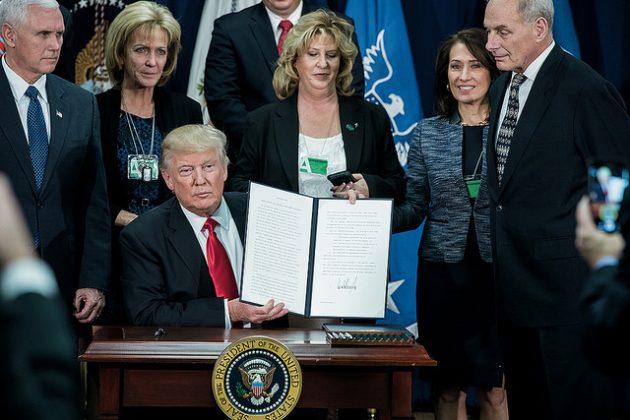 WASHINGTON—President Donald Trump de-escalated a confrontation with China on Wednesday, dropping plans to impose strict limits on Chinese investment in U.S. technology companies and instead urging Congress to strengthen existing laws that apply to all foreign countries.

The administration’s more conciliatory stance raised at least the possibility that the two sides could work toward a negotiated end to the punishing tariffs they’re set to impose on each other’s goods beginning July 6. And it fueled a temporary rally in financial markets, which had been reeling on fears of an escalating trade war.

Stocks sank late in the day, though, after Larry Kudlow, Trump’s top economic adviser, said on Fox Business Network‘s “Varney & Co.” that the administration’s policy shift should not necessarily be seen as a softening in its stance toward China.

It was unclear whether the policy shift would lead to a truce between the world’s two biggest economies, which have been edging toward a high-risk confrontation, or whether any formal negotiations might soon begin. But Kudlow told reporters that the two sides are “in communication.” And analysts said they took heart that the administration had offered some semblance of an olive branch to Beijing.

“It seems like this move is being undertaken with the goal of coming to a resolution ultimately on the trade policy issues the U.S. has with China,” said Stephen Ezell, who manages global innovation policy at the Information Technology and Innovation Foundation think-tank .

Last month, the White House said that by the end of this week, it would announce tight new curbs on Chinese investment. The idea was to prevent state-owned or politically connected Chinese companies from buying advanced U.S. technology. Beijing is seeking such technology as part of its “Made in China 2015” initiative, a roadmap to its goal of becoming a global tech leader.

But on Wednesday, the Trump administration announced a less-draconian approach: It would work with Congress to strengthen reviews of foreign investment under the existing Committee on Foreign Investment in the United States, or CFIUS, led by Treasury Secretary Steven Mnuchin. CFIUS applies to all countries—not just China—and its reviews are conducted on a case-by-case basis.

“Defining technology that is ‘off limits’ is an exceedingly difficult task,” Brewster said. “For this reason, broad-scale investment restrictions are a clumsy tool that inherently run the risk of being over-inclusive or under-inclusive. Using the CFIUS process is a more nuanced approach.”

The House has approved a bill to strengthen the CFIUS law, and the bill will likely be considered by a House-Senate conference committee for a Senate-approved defence measure.

Asked about the administration’s shift, Mnuchin told reporters, “It is not a question of whether we are focusing on China or we are not focusing on China” but an issue of using all means to address trade disputes with Beijing.

“For those who want to say this is being weak on China, the answer is no,” Mnuchin said. “The question was, What were the appropriate tools?”

Trump campaigned for the White House on a pledge to take a much more aggressive stance with China and other trading partners. He has long accused other nations of exploiting poorly negotiated trade deals and of using unfair practices to sell America far more than they buy from it. The United States last year posted a US$552 billion trade deficit with the rest of the world—$336 billion with China alone.

Washington and Beijing are sparring over China’s attempts to supplant U.S. technological dominance, through cyber-theft and policies that force American companies to hand over technology in exchange for access to the Chinese market.

On July 6, the United States is set to impose tariffs on $34 billion in Chinese imports—a sum that could reach $450 billion if Beijing refused to yield and retaliated with its own sanctions. In response, China is prepared the same day to slap tariffs on billions in U.S. exports, including soybeans—a direct threat to Trump supporters in America’s heartland. Many members of Congress have warned the administration to avoid a trade war with China.

“The president is unsatisfied with their response on the trade talks, and so he put out there the possibility of an additional tariff measure,” Kudlow said, referring to China. “The ball’s in their court. I’m always the optimist, but I have to be realistic.”

James Lewis, who studies technology policy at the Center for Strategic and International Studies, said he foresees no quick resolution to the dispute.

“Both sides are dancing around; they know a trade war is too expensive,” Lewis said. But there’s “going to be brinksmanship. The Chinese don’t want to play by the rules. We needed to start pushing back. This is going to be a long fight.”

The debate within the administration on how to deal with China had reportedly intensified—between hard-liners like Peter Navarro, a top trade adviser, and moderates led by Mnuchin who favoured a less confrontational stance.

“Peter Navarro lost, and Steve Mnuchin won, and we ended up with what’s actually a good policy,” said Rod Hunter, a lawyer who served as an economic official on the National Security Council in President George W. Bush’s administration.

But Hunter noted that Trump’s approach to policymaking is so mercurial that it’s impossible to say whether the conciliatory approach will last or whether the Navarro camp will stage a comeback.

It’s difficult, Hunter said, “to figure out who’s got their hands on the steering wheel.”

Mnuchin told reporters that the differences among Trump’s advisers had been overblown. He said there was unanimous backing for the new approach when it was presented to the president for his final approval earlier this week.

“At the end of the day, all the president’s advisers were 100 per cent unanimous when we sat down with the president,” Mnuchin said.