January 17, 2017  by Jamey Keaten And Gillian Wong, The Associated Press 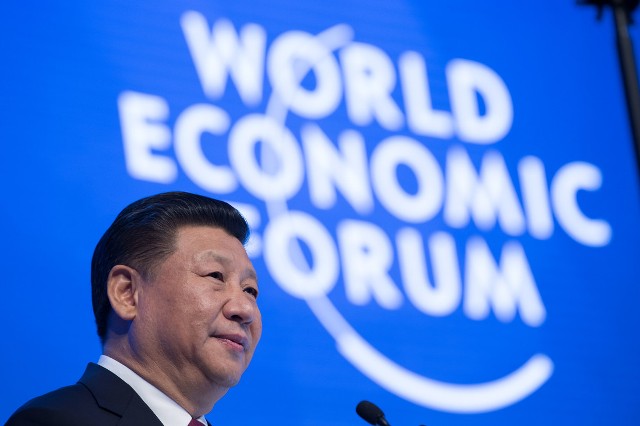 DAVOS, Switzerland—With the U.S. increasingly looking inward and China eager to take a lead on the global stage, Chinese President Xi Jinping on Jan. 17 cast his country as a champion of free trade and stability, a rebuke to the isolationist urges that helped carry Donald Trump to power.

Some of the elites listening in Davos, Switzerland, hailed a statesmanlike, even Barack Obama-like speech from Xi as the first Chinese head of state to attend the World Economic Forum—even if it depicted a Chinese commitment to open markets that falls short of reality.

The speech, rife with metaphor and allusions to Ali Baba, Chinese proverbs and even Abraham Lincoln, highlighted a high-brow effort to make a contrast with an incoming U.S. leader whose own words regularly stirred controversy at home and abroad and created new doubts about U.S. leadership in the world.

“We must remain committed to promoting free trade and investment through opening up and say no to protectionism,” Xi told an opening meeting of the WEF. “Pursuing protectionism is like locking oneself in a dark room. While wind and rain may be kept outside, so are light and air.”

“No one will emerge as a winner in a trade war,” he said.

During his campaign, Trump promised to raise tariffs on Chinese goods and declare Beijing guilty of keeping its currency artificially low. That would be a first step toward imposing sanctions. But in fact, for the past couple of years China has been intervening in markets to prop up its currency, not push it lower.

“China has no intention to boost its trade competitiveness by devaluing the renminbi, still less will it launch a currency war,” Xi said Tuesday.

Xi made no direct reference to Trump, but his vocal support for free trade could appear rich to other Western countries who have grumbled about commercial restrictions in China.

Foreign companies complain Beijing is reducing access to its markets for electric cars, computer security technology and other promising fields or pressing them to give know-how to potential Chinese competitors. Some say they are blocked from acquiring assets in China, just as Chinese companies have been on a foreign buying spree.

“The political leadership of China never ceases to assure us that further opening toward foreign investment … is a priority,” Germany’s ambassador to China, Michael Clauss, said this week. “However, many companies keep telling us that their difficulties in these areas have increased.”

“It often appears that somewhere down the line, political assurances of equal treatment give way to protectionist tendencies,” he said in a statement.

“These are very nice words,” said Nariman Behravesh, IHS chief economist, of the Xi speech. “What specific things is China going to do in terms of opening up, becoming a true engine of globalization? … I like the commitments but in English we have an expression, ‘Actions speak louder than words.’ Let’s see what the actions are.”

Xi also stepped into other areas of international consensus, calling the Paris accord to fight climate change a “hard-won achievement,” and urging signatories to “stick to it.”

Trump, who has called climate change a Chinese hoax, has raised speculation that he might pull the U.S. out.

The visit by Xi caps the largest-ever Chinese delegation to Davos, including over 100 officials and scores of business executives and embodying a tectonic shift at an event that started nearly a half-century ago among Europeans and Americans.

Speaking Monday, WEF Founder Klaus Schwab said this year’s event is “not just a Western meeting.” One third of participants are from developing economies.

The bumpy run-up to the Trump administration—Trump’s poll numbers are low for an incoming president—has given the Chinese leader a convenient opportunity to advance his goal of giving his country a more assertive leadership role.

China previously sought to capture the mantle as a supporter of world trade after Trump said he would pull the United States out of the 12-nation Trans-Pacific Partnership trade deal championed by President Barack Obama.

Xi cast the world economy as adrift, saying it lacked a “driving force” and that inadequate global governance and unequal benefits have widened the gulf between rich and poor. “This is the biggest challenge in the world today,” he said.

He called for a “new growth model” that takes into account climate change, aging populations and increased automation.

Xi hit hard on the metaphor of the world economy as an “ocean,” saying countries “must have courage to swim in the global market.”

“We should not develop a habit of retreating to the harbour whenever encountering the storm, for this will never get us to the other shore of the ocean,” he said.

Mainstream Western leaders have been grappling with populist movements at home, including the one that helped undergird Trump’s election victory. His transition team has one top adviser, Anthony Scaramucci, at the forum ahead of Friday’s presidential inauguration.

Chinese officials last week said that envoys to the WEF were willing to meet with members of Trump’s team in Davos, but Scaramucci said he didn’t hear Xi’s speech. Outgoing Vice-President Joe Biden did, however, and briefly met with the Chinese leader, a U.S. diplomatic official said.

Some have been puzzled by the shifting geopolitical landscape epitomized by Xi’s speech championing free trade and globalism. New York Times columnist Thomas Friedman, as he interviewed Secretary of State John Kerry in Davos, quipped: “If you had just read me the words, I would have told you: ‘I didn’t know that President Obama came here.”’