U.S. lawyers gather to ponder Trump’s NAFTA options: Can he cancel it alone?

The high-stakes question hinges on separate powers granted to the president and Congress in the U.S. Constitution. With few precedents, however, trade lawyers remain divided on how a unilateral Trump cancellation would play out 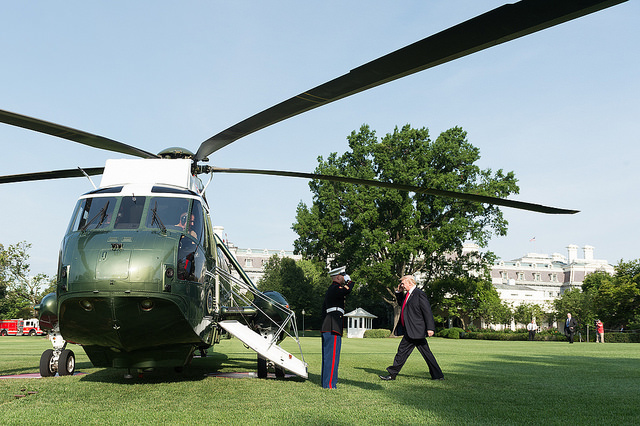 Certain trade lawyers argue the president’s power is limited by Article One of the Constitution, others say the debate is less clear-cut. PHOTO: Andrea Hanks/The White House

WASHINGTON—Legal experts huddled together at a recent conference to ponder a question that could go from being a distant hypothetical to one that dominates Canada-U.S.-Mexico relations: can an American president unilaterally cancel a trade deal?

The reason it’s suddenly relevant, of course, is President Donald Trump’s repeated threats to scrap NAFTA, and it came up at a Duke University conference on exiting international agreements, where one session was dedicated specifically to trade.

Curtis Bradley told colleagues he’s convinced the president could do it alone. Bradley’s view carries weight: he co-edits the prestigious international-law journal of the American Law Institute. And he has little sympathy for the argument the president can’t act.

That argument stems from an apparent contradiction in the cornerstone of American law: in the U.S. Constitution, Article One gives Congress power over commerce, while Article Two gives the president power over international affairs.

People are now being prompted to discuss this by a rare political phenomenon: Presidents don’t usually threaten to cancel trade deals.

”I know those arguments (that he can’t do it). I happen to think (they’re) not right,” Bradley said in an interview, after the Oct. 27-28 conference.

”The bottom line is that for at least the last 100 years presidents have acted on behalf of the United States to decide whether to withdraw the United States from treaties… We don’t do it often, I should emphasize. It’s a rare event… (But) Congress has (almost) never objected.”

Trade deals are fundamentally the same, in his view, as other international treaties, like the Paris climate accord.

”There’s just nothing special about commerce,” Bradley said. ”(Congress) could never make NAFTA… It could never make the Korea-U.S. agreement… I hate to be so critical, because I tried to listen hard (to the opposing argument)… But many people in the room … were puzzled by (it).”

Yet he admits to important unknowns.

One source of uncertainty is what would happen to the law Congress passed to implement NAFTA in 1994. Even if Trump pulls out, Bradley notes, no president can snap his fingers and make a law vanish.

Another unknown is whether Congress might take steps to stymie the president. It’s a remote possibility for now. But one idea floating around Washington’s pro-NAFTA ranks would involve Congress passing a bill to require a thorough study before any pullout.

One member of Congress is making NAFTA an issue: Jeff Flake, who has announced he’s not seeking re-election, is confronting Trump on trade, and has announced he will use procedural blocks to delay an administration appointment amid concerns over NAFTA.

And there would likely be lawsuits. Bradley assumes that parties facing financial damage could claim legal standing to fight in court against a NAFTA withdrawal, and try forcing the U.S. justice system to make a decision.

Joel Trachtman of the Fletcher School presented a paper at the conference arguing the president can’t do it alone. It said a unilateral Trump pullout would be virtually unprecedented; Trachtman identified 112 treaties the U.S. had terminated, and he found almost no examples of a president acting alone.

”Only a very small number—one to four,” he wrote.

It’s especially tough for the president in this case, he says.

First, it involves trade where Congress has a constitutionally recognized role. Furthermore, the 1994 NAFTA law remains on the books. Finally, he argues that the 1994 law makes a telling distinction: it stipulates that the original Canada-U.S. trade legislation would end in the event of a withdrawal, but does not make the same guarantee on NAFTA.

Trachtman also cites the seminal 1952 Youngstown Steel case, which curbed a president’s power to contradict a law passed by Congress.

Some are dead-set against Trachtman’s view. Others agree with him that presidential powers are limited.

The latter group includes one of the co-authors of a paper presented there, Tim Meyer of Vanderbilt University, who said in a recent interview: “If the president were to rip up NAFTA and then sort of jack tariffs way up, I think somebody would be able to say … ‘You’re actually violating U.S. domestic law.”’

Believers in presidential power include one of Washington’s most respected trade-watchers, Gary Hufbauer of the Peterson Institute. In his view, the president could invoke NAFTA’s termination clause, Article 2205, which allows a country to withdraw on six months’ notice. After six months, Hufbauer says, Trump could decide whether to follow through and reimpose tariffs.

At another conference last month, Scott Lincicome of the pro-trade Cato Institute described a variety of befuddling possibilities. One is a zombie-like scenario: Trump announces a pullout, then doesn’t follow up with actions, there are no new tariffs, and NAFTA stumbles along, half-dead.

”So you’re all getting a nice window into the fun we trade lawyers have had for the last year, trying to figure all of this out,” he told conference-goers at Cato.

”It’s a paradise for trade lawyers—as long as your clients are willing to accept ‘I don’t know.’“