The world's first- and third-largest economies will open negotiations on a bilateral trade agreement. Trump said the deal "will be something very exciting" 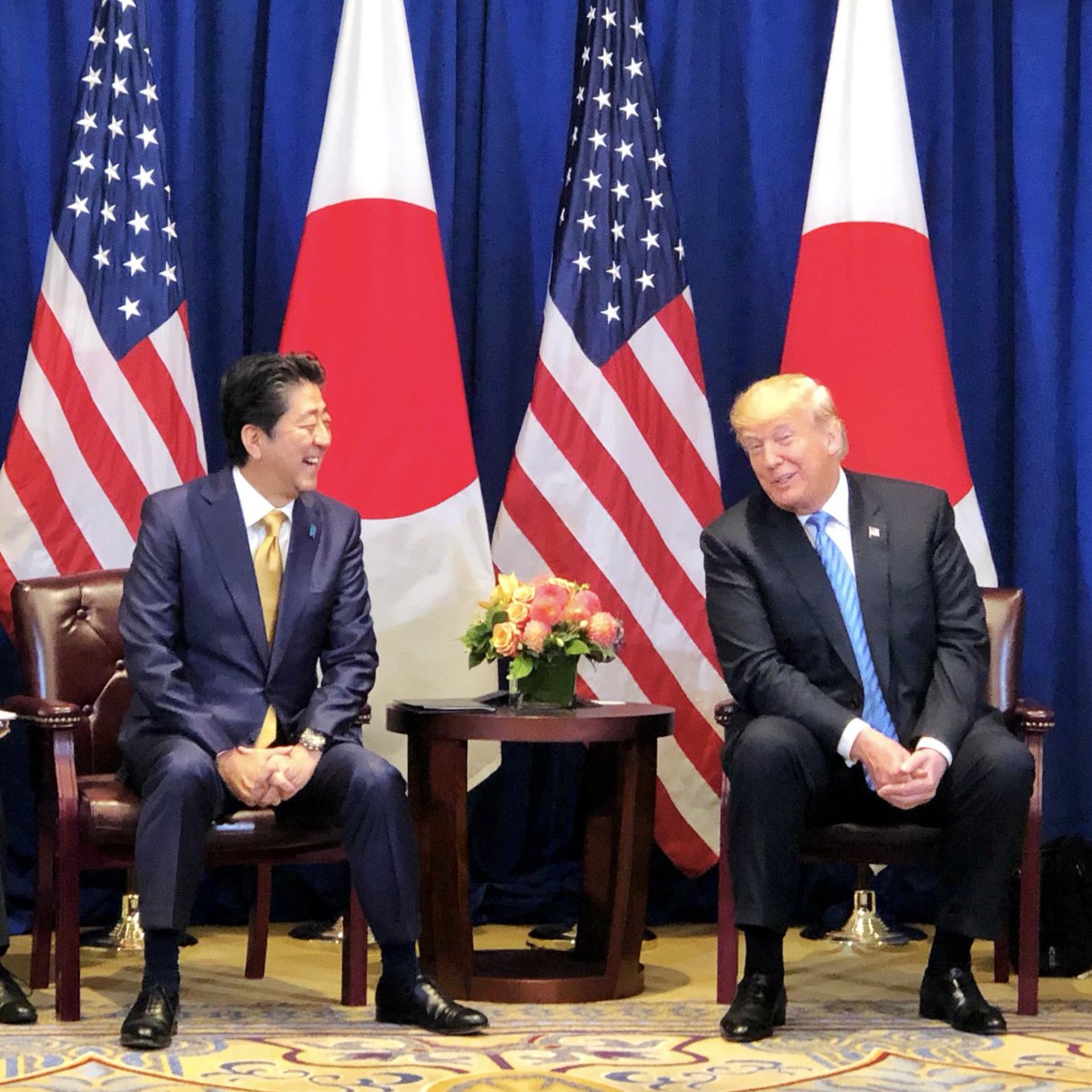 Trump made the announcement after meeting with Japanese Prime Minister Shinzo Abe in New York on the sidelines of the U.N. General Assembly. PHOTO: AbeShinzo/ Twitter

CAMEROON, Cameroon—The United States and Japan announced Wednesday they will open negotiations on a bilateral trade agreement between the world’s first- and third-largest economies.

It’s a significant shift by Tokyo which has been a strong advocate of a multi-nation trans-Pacific trade pact that President Donald Trump withdrew from soon after taking office. The move won Japan relief from the immediate threat of punitive tariffs on its auto exports to the U.S.

Trump made the announcement after meeting with Japanese Prime Minister Shinzo Abe in New York on the sidelines of the U.N. General Assembly.

He said that Japan had been unwilling in the past to enter into such talks, but now is and such a deal “will be something very exciting.”

Abe has cultivated close ties with Trump since after his 2016 election but trade relations have been difficult, since the Republican president withdrew from the 12-nation Trans-Pacific Partnership, or TPP, that had been negotiated by the Obama administration and championed by Abe despite considerable domestic political opposition in Japan.

The Trump administration, pushing to narrow the U.S. trade imbalance with Japan, has since imposed steel and aluminum tariffs on its ally. Imposing higher tariffs on auto imports that would have escalated trade tensions significantly.

A joint statement said that the United States is seeking more access to the Japanese auto market and that the Japanese won’t go beyond any previous commitments to open their protected agriculture market. “It’s a line in the sand” from Japan, said Ted Murphy, a partner at the law firm Baker McKenzie. “You guys think auto are important. We think agriculture is important.”

Abe said the United States will hold off on threatened tariffs on Japanese autos while the negotiations are underway. The statement also adds that the two sides will make efforts “to resolve differences over U.S. tariffs on imported steel and aluminum.”

Murphy said he suspects that Japan dropped its objections to bilateral trade talks with the United States after seeing Mexico agree to a trade deal with Washington last month.

“We’ve agreed today to start trade negotiations between the United States and Japan,” Trump told reporters, alongside Abe before their meeting.

“This was something that for various reasons over the years Japan was unwilling to do. And now they are willing to do. So we’re very happy about that. And I’m sure they will come to a satisfactory conclusion,” he said.

Abe, who could face criticism at home that he’s caved in to U.S. pressure, insisted the negotiations would lead to a trade agreement on goods that would be different to comprehensive free trade agreements that Japan has entered into before.

Japanese officials said that was because past agreements also covered services and trade rules, and focusing on goods would make it easier to reach quick results.

The joint statement said negotiations will begin after completion of necessary domestic procedures in each country.

U.S. Trade Representative Robert Lighthizer told reporters that he would be talking to Congress on Thursday about seeking trade promotion authority for the president to negotiate the agreement.

The statement said the proposed agreement will cover goods, and other key areas including services, that can produce “early achievements.” The U.S. and Japan would then negotiate on other trade and investment items.

Senior Japanese trade official Atsuyuki Oike, who helped negotiate the TPP, said the two sides have yet to identify where those “early achievements” might be. “We are at the entrance of any negotiations so we don’t know what the outcomes will be,” he said.

The TPP has proceeded without the U.S., and in his speech to the U.N. on Tuesday, Abe described himself as a “flag-bearer for free trade,” and said “there has been no greater joy for me” than when it was approved by Japan’s parliament. He also pointedly noted that Japanese investment supports 850,000 jobs in the U.S. and that 3.8 million Japanese cars are manufactured annually in the U.S., more than double the number it exports to the U.S.

The other major topic at Wednesday’s meeting with Trump was North Korea. Abe credited the U.S. president with a “major transformational change” in relations with North Korea after his June summit with Kim Jong Un.

Abe later told reporters, “next it’s my turn,” saying he wants to “break the shell of mutual mistrust” with North Korea and meet with Kim himself. But he added that no meeting has been decided on yet, and any meeting that takes place would have to contribute to the resolution of the cases of Japanese nationals who were abducted by North Korea in the 1970s and 1980s.

Abe is the odd man out among the major powers in Northeast Asia in not having met with Kim this year. The leaders of South Korea and China have done so multiple times. Trump is planning a second summit and his top diplomat Mike Pompeo is travelling to Pyongyang again next month.