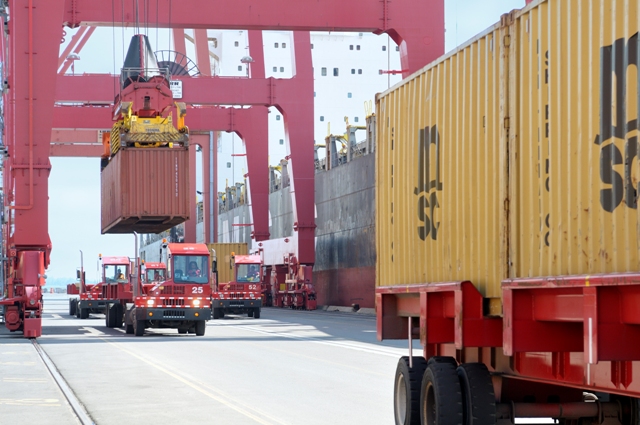 Though Canada can expect small gains from the TPP, some sectors, including the auto industry, are expected to experience losses. PHOTO: Port of Montreal

TORONTO—Canada is not expected to be among the Trans-Pacific Partnership’s big winners.

Though the mammoth trade deal is certain to have a significant impact on Canadian business, the tentative agreement will only provide Canadian industry with modest gains, according to a new report from the C.D. Howe institute.

“Canada, along with Malaysia and New Zealand, make tangible gains in terms of exports resulting from the TPP,” the report’s authors say. “However, as a trade deal, the TPP mainly benefits the United States, Vietnam, and Japan.”

“For the remaining parties, which notably include all the Latin American parties, the deal is essentially a wash in trade terms,” the report says.

Canada has already signed the agreement, which will impact trade between countries representing 40 per cent of the world’s GDP, but has not ratified the deal.

Echoing a consistent theme when analyzing the TPP, however, the report says Canada will lose more by failing to take part in the deal than it will by ratifying it.

“The question we put to the TPP text is: show us the money,” authors Dan Ciuriak, Ali Dadkhah, and Jingliang Xiao, said. “There is some money in the TPP for Canada but the trade gains are relatively modest and the income and welfare impacts are commensurately modest as well.”

“What our analysis suggests is that even ambitious, so-called deep and comprehensive agreements like the TPP have limited traction in what is an already highly open global economy, which features many parallel processes chipping away at irritants to trade and investment.”

Overall, if ratified, the TPP is expected to boost Canada’s real GDP by about 0.02 per cent in 2018. That figure would rise to about 0.08 per cent by 2035, representing a $4.3 billion boost in two-way trade between partners, according to the report.

Broken down by industry, Canada’s food producers will gain the most. The think tank said the agricultural produce, meat products (mainly pork and beef), and downstream food products industries will post “major gains” under the deal. Dairy, however, will take a hit under the agreement.

The country’s largest manufacturing sector, the auto industry, is also expected to experience a “relatively large decline in total shipments.” The report notes the loss will be small relative to the size of the sector. The textile and apparel industry, the chemicals-plastics-rubber complex, and the metal products segments of the economy are also poised to lose under the deal.

The report’s authors say wood products and transport equipment will “buck this trend” and make gains.

Meanwhile, the report says if Canada chose not to ratify the deal, the country’s GDP would be negatively impacted by 0.006 percent by 2018 and 0.026 percent by 2035. Significantly though, the think tank noted that for a number of sectors, including autos, losses could not be avoided even if Canada was left out of the deal.

The full report, which includes a detailed breakdown of the analysis, can be found here.