Lighthouse Resources Inc., which is headquartered in Utah, had been seeking approvals for a coal export terminal since 2010 but has been unsuccessful 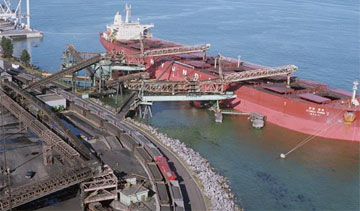 BILLINGS, Mont.—A coal company with mines in Montana and Wyoming said that it’s begun exporting fuel to Asia through a Canadian shipping terminal, after its years-long effort to secure port access in the U.S. Pacific Northwest has come up short.

The announcement from Lighthouse Resources, Inc. offered a rare bit of positive news for the coal mining industry, which has been in a prolonged tailspin amid falling demand due to climate concerns and competition from cheap natural gas.

But industry opponents said the move signals that coal exports through Oregon and Washington are doomed to failure, while a regional trade group warned it heralds a loss of U.S. jobs to Canada.

Details on the announcement were obtained in advance by The Associated Press.

Lighthouse, which is headquartered in Utah, had been seeking approval since 2011 for a coal export terminal in Oregon and since 2010 for a terminal in Washington. It’s faced strong opposition from environmentalists, American Indian tribes and some state officials concerned over coal dust pollution and potential damage to fisheries on the Columbia River.

With the company’s coal now going through British Columbia’s Westshore Terminals, Lighthouse Chief Executive Officer Everett King said it was pulling out of the proposed coal terminal at Port of Morrow in Boardman, Oregon after that project stalled.

“Though we are disappointed for our Morrow Pacific Project supporters, we are very excited to commence delivery of products to our customers,” King said.

The exported fuel is destined for coal-burning power plants in South Korea, the company said. It declined to give shipment volumes.

The Washington state project, known as Millennium Bulk Terminals and located near the town of Longview, continues to move forward. It received a favourable review in a preliminary environmental assessment last month by the U.S. Army Corps of Engineers.

Overseas exports of U.S. coal have been touted as a lifeline for an industry wracked by a wave of bankruptcies and declining domestic demand. Yet shipments to foreign nations peaked in 2012 and have since fallen sharply, as China and other countries have reduced their imports of the fuel, according to the Energy Information Administration.

Lighthouse Resources operates the Decker Mine in Montana and the Black Butte Mine in Wyoming. Combined, the mines employ more than 300 people and extracted roughly 6 million tons of fuel last year, according to data submitted to the U.S. Labor Department.

An organizer for a group that’s fought against the Lighthouse proposals said she was not surprised the company was dropping its efforts at the Port of Morrow, after the Oregon Department of State Lands last year denied a permit for the project.

“I imagine Lighthouse doesn’t see a future for coal exports on the Columbia,” said Jasmine Zimmer-Stucky with Columbia Riverkeepers. She said the company’s agreement with Westshore appeared to be a “backdoor way” to avoid more stringent environmental rules in Oregon and Washington.

Kathryn Stenger, a spokeswoman for the Alliance for Northwest Jobs & Exports, said fears that the region would lose business to Canada or other regions of the U.S. were now becoming reality.

“Canada is all too happy to take these jobs,” she said.

Port of Morrow General Manager Gary Neal said the shift by Lighthouse to Canada was disappointing. It will mean the loss of $200 million in potential capital investment in the port and 25 anticipated jobs, he said. The port will try to make up the difference by increasing shipments of grains, potash and other commodities.

The port will continue with its appeal of the state’s permit denial in order to preserve future options at the facility, he said. A hearing before an administrative law judge is scheduled for November.