President-elect Andres Manuel Lopez Obrador takes office Saturday, just a day after the United States, Mexico and Canada are to sign the USMCA

November 29, 2018  by Matthew Lee And Mark Stevenson, The Associated Press 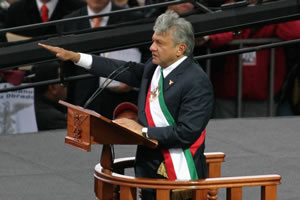 MEXICO CITY – Migrants, trade, crime, the border wall: The challenges to the modern U.S.-Mexico relationship have perhaps never been as stark and divisive as they are now, at a critical juncture for both countries.

With a new president preparing to take power in Mexico City this weekend and the Trump administration set to enter its third year, the two neighbours find themselves lurching between crisis and opportunity on each front. While a trade dispute that President Donald Trump had fanned with great enthusiasm seems set to ease, the other issues remain unresolved and potential flashpoints for both countries.

“This is really a key moment,” said Earl Anthony Wayne, a former U.S. ambassador to Mexico. “There are very serious short-term problems that have to be managed and managed in a way that can solidify relations over the course of the next six years.”

President-elect Andres Manuel Lopez Obrador takes office Saturday, just a day after the two nations and Canada are to sign a replacement accord for the North America Free Trade Agreement, which Trump lambasted during the 2016 campaign and vowed to cancel.

Sealing that deal was an achievement for the outgoing Mexican government as well as for Trump’s son-in-law, Jared Kushner. He will attend the signing of the U.S.-Mexico-Canada Agreement at the Group of 20 summit in Buenos Aires, Argentina, and will be awarded the highest honour Mexico gives to foreigners, the Order of the Aztec Eagle.

Neither Trump, who has reached out multiple times to Lopez Obrador since his election in July, nor Kushner will be at the inauguration. But Vice-President Mike Pence will be there as will Kushner’s wife, Ivanka Trump. In addition, Secretary of State Mike Pompeo, who has already met Mexico’s incoming foreign minister Marcelo Ebrard at least twice, plans to see him again in Washington on Sunday. Kushner will see the foreign minister and his team on Monday. These are indications the White House is keen to keep in close contact with the new Mexican leadership.

Nevertheless, the administration has yet to nominate a new ambassador to Mexico, a post that has been vacant since May. And the apparent personal goodwill and positive developments on trade can’t mask deeper tensions over migration and drug trafficking, Trump’s demands that Mexico pay for a border wall and the deployment of U.S. troops to the southern frontier with a threat to seal all crossings. There’s also the matter of the president’s frequent denigration of Mexicans, repeatedly saying Mexico was sending “criminals” and “rapists” to the U.S.

Left unresolved, these could lead to crisis, especially as Trump heads into campaign season for the 2020 U.S. presidential election.

“Is it possible for things to go horribly wrong? Absolutely,” said Duncan Wood, director of the Mexico Institute at the Wilson Center think-tank in Washington. “Campaign mode is going to be ramping up, and what’s clear is that immigration is not going away as an issue. As long as Trump sees there is a political opportunity to hammer the Mexicans and push Congress to get money for his wall, this is all going to cause problems.”

One possibility is that the populist Lopez Obrador could be driven by Mexican domestic politics to walk away from cordial relations with the U.S. The outgoing government has already demanded the U.S. investigate an incident this weekend in which American border agents fired tear gas into Mexico at a rowdy group of migrants. Lopez Obrador may have to confront similar events.

“He has a big coalition that has a whole range of people in it, including people who would tend to be critical of the United States,” Wayne said. “The risks are that we not get in a situation where we push him further into a corner when he clearly wants to co-operate.”

In the run-up to his inauguration, Lopez Obrador sought to continue his predecessor’s aim of trying to demonstrate that Mexico is a reliable partner for the U.S.

He is aiming to save face after accepting that Mexico would house migrants seeking asylum in the United States by seeking in return a big U.S. contribution to create jobs in Central America and southern Mexico so people would be less inclined to emigrate. Ebrard has suggested that $20 billion is reasonable figure. “It is like the Marshall Plan, in terms of the size of the effort that is needed,” he said, referring to the post-World War II reconstruction effort in Europe.

The deft bit of manoeuvring appears to signal that Lopez Obrador’s team has tacitly accepted the U.S. desire for asylum-seekers to stay in Mexico while their claims are evaluated, in exchange for U.S. aid in an unstated quid pro quo.

For some, it is a balancing act in which Lopez Obrador preserves Mexican dignity while avoiding angering Trump.

Ideally, the United States had wanted a formal agreement in which Mexico would agree to become a “safe first country” – meaning migrants would have to apply for asylum in Mexico before reaching the U.S. border – or a “safe third country,” meaning migrants could be returned to Mexico if they weren’t granted asylum in the U.S.

Raul Benitez, a security expert at the National Autonomous University of Mexico, said that, so far, Lopez Obrador has proved surprisingly adept at handling foreign relations despite having almost no experience in the field.

“He has a good relationship with the United States,” Benitez said. “Foreign relations have been the best area I have seen” in the incoming administration. “He got involved in negotiations on the free trade agreement, and that didn’t go badly.”

For others, it smacked of a sellout.

Erika Guevara-Rosas, Americas director at Amnesty International, wrote that “If Mexico agrees to do the US government’s dirty work at the expense of the caravan members’ dignity and human rights, it is effectively paying for Trump’s shameful border wall.”