The U.S. president's appearance next week at the G7 leaders' summit in Quebec's Charlevoix region will be his first official visit to Canada, and his recent decisions are sure to cast a shadow over the proceedings 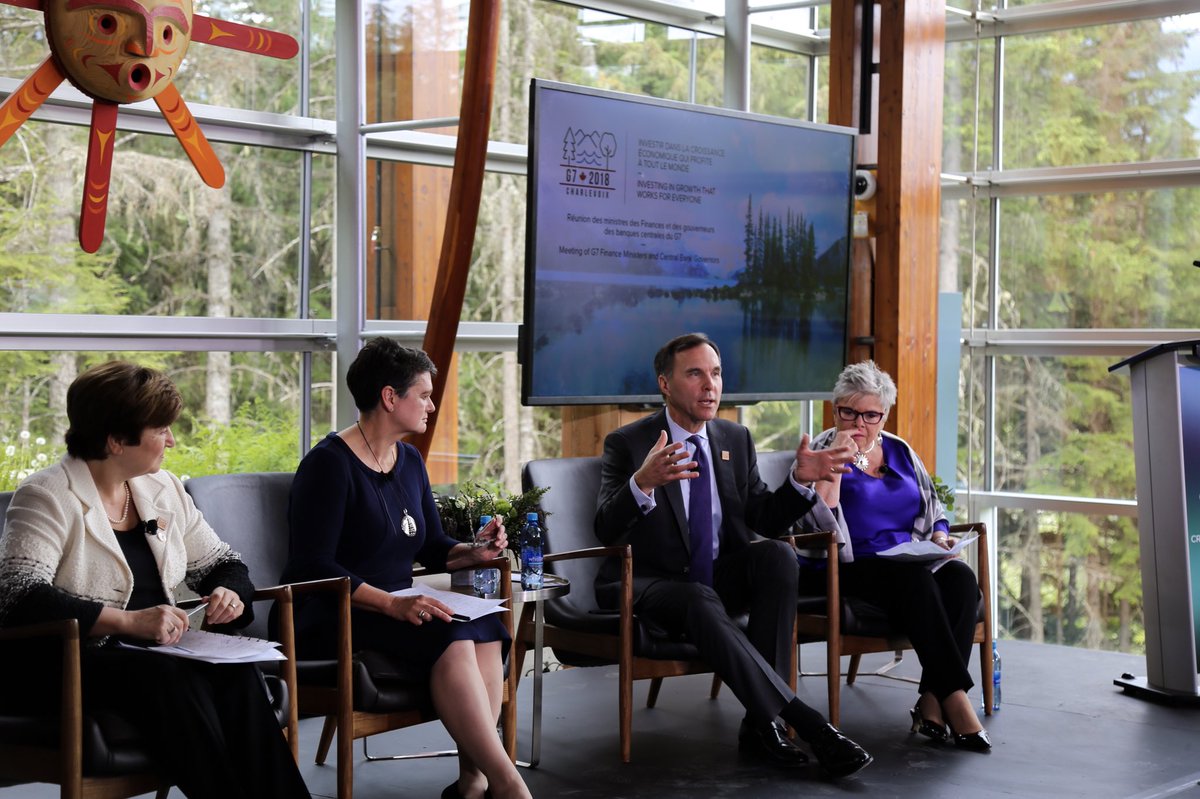 Prior to next week’s leaders’ summit in Quebec, Finance Minister Bill Morneau hosted a G7 ministerial meeting which was dominated by the U.S.’s decision to impose metal tariffs on its allies. PHOTO: Bill Morneau/Twitter

WHISTLER, B.C.—The Trump administration’s “absurd” tariffs on steel and aluminum sent protectionism rocketing to the top of Bill Morneau’s G7 agenda Thursday as he and his fellow finance ministers from the exclusive club of rich countries braced for the inevitable economic impact.

With his pre-selected program shoved aside, Morneau made it clear the discussions in British Columbia’s Coast Mountains will have little choice but to focus on U.S. President Donald Trump’s widely denounced trade offensive against Canada and other G7 allies.

The American move—which prompted retaliatory measures from Canada and others—threatens to drive a powerful wedge into the G7, and could fracture the long-standing multilateral relationship into something observers describe as a “G6 plus one,” with the U.S. as the outlier.

This week’s three-day pre-G7 gathering, which got underway Thursday, will “absolutely” now be focused on trade, thanks to a U.S. tactic that’s widely seen as the death knell for jobs on both sides of the Canada-U.S. border.

“We think it’s absurd that Canada is considered in any way a security risk, so that will be very clearly stated by me,” Morneau said of the U.S. decision to justify the tariffs on the basis of national security.

“I have every expectation that our other allies around the table will express the same sentiment.”

Morneau said he expects the G7 to keep pressure on the U.S., hoping to force it to reconsider—and he fully expects the effort to continue at next week’s leaders’ summit in Quebec’s Charlevoix region. The summit will be Trump’s first visit to Canada as president.

In addition to Canada and the U.S., the other G7 countries are Japan, the United Kingdom, France, Italy and Germany.

The Whistler meetings will also give Morneau and other G7 ministers an opportunity to hold face-to-face discussions with U.S. Treasury Secretary Steven Mnuchin, with whom Morneau met for a bilateral meeting Thursday.

On his way to the meeting room, Mnuchin was asked by a reporter what he’s telling his G7 allies about the tariffs. He responded by saying: “Nice to see you, how are you?”

Later Thursday, Mnuchin didn’t join Morneau and most of their G7 counterparts for a photo-op before the opening dinner. Ministers and central bankers walked together down a street from their hotel behind a procession of Indigenous drummers to a nearby lodge, but Mnuchin was nowhere to be seen during their brief stroll.

Earlier in the day, Morneau spoke of his “strong” relationship with Mnuchin, but even friends have disagreements, he noted.

“When we face challenges, we can’t get through them without talking,” said Morneau, who attended Mnuchin’s wedding last year.

In Whistler, the bombshell news was hard to miss, even if a panel of prominent economic and political leaders did their level best to avoid it. During one particular Q and A, the panellists largely steered clear of direct questions about the U.S. tactic and its likely consequences.

Instead, they strenuously defended the G7, stressing its role as an important leader that, for example, helped the world economy avoid a second Great Depression about a decade ago.

“Thank you, Amanda, for lobbing that grenade my way—I’ll try and jump on it,” joked Bank of England governor Mark Carney, a former Bank of Canada governor, as moderator Amanda Lang tried to broach the subject.

“At the end of the day, if trade is massively disrupted, if the level of trust of the economic actors amongst themselves is severely damaged—first of all, those who will suffer most are the poorest, the less privileged people,” Lagarde said.

In the past, Trump had extended tariff exemptions for Canada and others beyond existing deadlines. That didn’t happen this time, perhaps catching by surprise some G7 officials who had expected Trump to avoid imposing them this time around.

On Thursday, Foreign Affairs Minister Chrystia Freeland said Canada would levy tariff “countermeasures” of its own on up to $16.6 billion worth of imports of steel, aluminum and other products from the U.S.

The tariffs pulled focus away from the pre-selected, overarching themes for the Whistler meeting—topics that closely line up with key domestic policy areas promoted by the federal Liberal government.

Those include finding ways to ensure economic growth benefits more people, as well as a push towards gender equality and the empowerment of women.

Whistler, which continues through Saturday, will also feature joint sessions between G7 development and finance ministers with a goal of finding ways to increase support for poor nations—with help from the private sector—under a focus of girls’ education.

The tariff file also lands on Morneau’s desk at a time when he’s already been consumed in recent weeks—and particularly in recent days—by a major domestic issue: the controversial Trans Mountain pipeline expansion.

Earlier this week, Morneau announced the federal government made a $4.5-billion offer to buy Trans Mountain from Kinder Morgan and would build the expansion itself in order to overcome political opposition in B.C.