by Jonathan Lemire And Nicholas Riccardi, The Associated Press  September 16, 2016

A day after former Secretary of State Colin Powell called him a "national disgrace" in leaked emails, the cantankerous Republican nominee finally attached real numbers to his consistent economic rhetoric 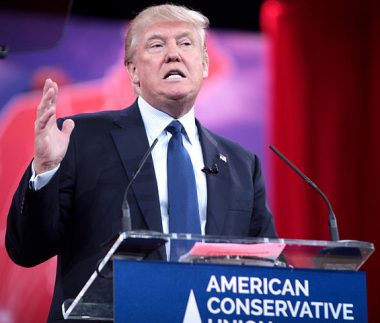 NEW YORK—Donald Trump has attached a price tag to an economic vision promising what many economists say is impossible: lower taxes, a dramatic expansion in some federal programs and a slimmer government running a smaller deficit.

In a speech Sept. 15 to the Economic Club of New York, Trump said that his plan—a mix of tax cuts, regulation elimination and new spending—would reduce the nation’s tax burden by $4.4 trillion over 10 years and create 25 million new jobs.

Trump and his advisers say that would lead to booming economic growth of as much as 4 per cent a year, which would make up for most of that lost tax revenue along with an infusion of new money from trade, energy and regulatory reforms.

The rest would come from almost $1 trillion in spending cuts made over the next decade, which Trump would accomplish by cutting one penny from every dollar from certain segments of the government each year.

“My plan will embrace the truth that people flourish under a minimum government burden and will tap into the incredible, unrealized potential of our workers and their dreams,” Trump said.

For Trump’s plans to succeed, they would have to overcome forces in the economy, such as rising automation, an aging population and low-wage competition overseas, that have led even conservative economists to call 4 per cent growth an improbable goal.

The U.S. economy is already creating 2.5 million jobs a year, the same pace promised by Trump over the next decade.

Related: Canada prepares to get dragged into U.S. election as Trump blasts NAFTAEarlier in his campaign, Trump proposed a $10 trillion tax cut over 10 years that was so large and costly that several Republican economists laughed when asked about it. He later tacked on a series of spending proposals that promised even larger deficits, including a push against illegal immigration that analysts estimated could cost up to $600 billion, a $500 billion investment in the nation’s infrastructure and a vow to restore $450 billion of existing cuts in military spending.

“Trump took the budgetary criticism seriously, and made a case that it actually adds up,” said Douglas Holtz-Eakin, who was John McCain’s economic policy director in the 2008 campaign and now is president of the American Action Forum.

Holtz-Eakin said that Trump’s economic plans are now roughly equivalent to those of Democratic nominee Hillary Clinton, at least in scope, namely by proposing several ambitious initiatives and making a plausible, though not necessarily conclusive, argument on how to pay for them.

Marc Goldwein, the senior policy director of the nonpartisan Committee for a Responsible Federal Budget, said Trump is “relying on very rosy economic assumptions that I don’t think are going to come to fruition.”

The economy is currently expected to grow by roughly 2 per cent a year, and economists say Trump’s proposed restrictions on immigration would be among the many things hampering his ability to double that rate of expansion.

If growth remains around a more realistic 2 per cent, Goldwein said, Trump’s plan would add roughly $5 trillion to the nation’s debt. Though Clinton’s tax hikes could slow the nation’s growth, he said, they’d pay for far more of her spending proposals and lead to a deficit a tenth the size of Trump’s.

Trump also vowed Thursday to not cut defence spending and to exempt Social Security, Medicare, and Medicaid from any reductions. Those programs make up two-thirds of the federal budget. That would mean his “penny plan” for reducing spending would likely cut the budget at the heart of some of his signature proposals, including the Border Patrol and Department of Veterans Affairs, said Harry Stein of the liberal Center for American Progress Action Fund.

It would also put Trump in direct conflict with House Speaker Paul Ryan, whose plans for the federal budget, widely embraced by Republicans, call for reining in the costs of programs such as Medicare and Social Security.

David McIntosh, the president of the conservative Club for Growth, hailed the plan, saying it “should be the centerpiece of what he runs on.”

But many economists are skeptical.

“When you look at a lot of these, the theory is nice, but the reality is there’s only going to be a small amount of savings,” Goldwein said of pledges to cut waste.

The heart of Trump’s plan is a revised tax code, which includes a pledge that no business should pay more than 15 per cent of its income in taxes, down from the current 35 per cent corporate tax rate. Few businesses now pay the full 35 per cent rate, taking advantage instead of many deductions in the existing tax code.

He also proposed simplifying the U.S. tax code for individuals, reducing the current seven tax brackets to three: 12 per cent, 25 per cent and 33 per cent of income after deductions.

As president, Trump said he would cut the number of regulations imposed by the federal government, including some that are designed to combat climate change and protect the food Americans eat.