by Jeff Karoub And Zeke Miller, The Associated Press  June 19, 2018

The U.S. president has directed his trade office to prepare new duties on US$200 billion in Chinese goods. This comes in addition to tariffs announced by both countries that will take effect July 6 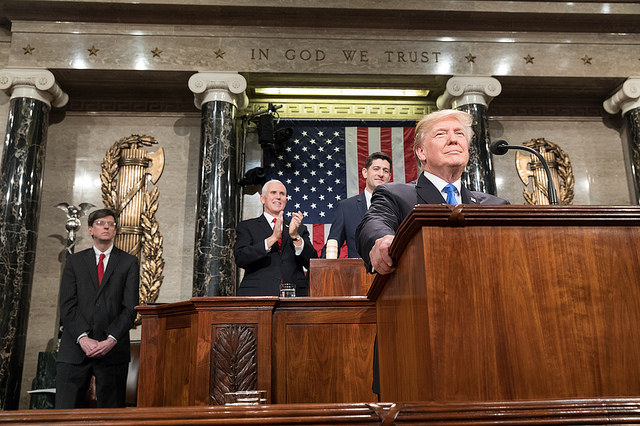 “China apparently has no intention of changing its unfair practices related to the acquisition of American intellectual property and technology,” Trump said. PHOTO: The White House/Flickr

WASHINGTON—President Donald Trump has directed the U.S. Trade Representative to prepare new tariffs on US$200 billion in Chinese imports as the two nations move closer to a potential trade war.

In response, China has threatened what it called “comprehensive measures,” raising the risk that Beijing would target operations of major American companies in china.

Trump’s proposed new tariffs would amount to the latest round of punitive steps in an escalating dispute between the world’s two largest economies. The two appear to be edging toward a trade fight that analysts say would undermine both their economies and likely slow global growth.

The White House accuses China of forcing U.S. companies to share advanced technology with Chinese partners as a condition of doing business in China. The administration also revived its complaints Tuesday about America’s gaping trade deficit with China.

Trump previously ordered tariffs on $50 billion in Chinese goods in retaliation for Beijing’s forced transfer of U.S. technology and for intellectual property theft. Those tariffs were quickly matched by China’s threat to penalize on U.S. exports, a move that drew the president’s ire.

Neither side has yet imposed tariffs on the other in their growing dispute over technology and the U.S. trade gap; the first round is to take effect on July 6. But the rhetoric from both sides is intensifying, with Trump lashing out at Beijing over its threat to retaliate against the administration’s latest proposed tariffs.

The president asserted in a statement Monday night that China is determined “to keep the United States at a permanent and unfair disadvantage.”

“China apparently has no intention of changing its unfair practices related to the acquisition of American intellectual property and technology,” Trump said in the statement. “Rather than altering those practices, it is now threatening United States companies, workers, and farmers who have done nothing wrong.”

U.S. stock markets fell sharply Tuesday morning, with investors increasingly nervous about the impact of the escalating fight. The Dow Jones industrial average was down about 320 points, or 1.3 per cent. Shares of large U.S. companies with significant overseas business were hit especially hard. Boeing’s stock shed 3.6 per cent, Caterpillar 3.7 per cent and GE 1.7 per cent.

China’s Commerce Ministry assailed Trump’s latest threat, saying it was an “act of extreme pressure and blackmail that deviates from the consensus reached by both parties after many negotiations, and is a disappointment to the international community.”

“If the U.S. becomes irrational and issues this list, China will have no choice but to adopt strong countermeasures of the same amount and quality,” the statement said.

China might struggle to match the U.S. tariffs because it imports much less from the United States—$130 billion in goods last year, compared with Chinese exports to the United States of $505.5 billion. That would leave less than $100 billion in U.S. goods to hit with a tariff hike, far short of the $200 billion Trump is threatening.

But Beijing’s mention of “comprehensive measures” suggests that it would go beyond tariffs, said Jake Parker of the U.S.-China Business Council. He asked whether that might include delaying or denying licenses required by U.S. companies.

The tit-for-tat moves could start to meaningfully slow U.S. growth, economists warn. Oxford Economics estimates that if Trump imposes the $200 billion in duties and China responds, U.S. growth could slow by 0.3 percentage point next year.

“It looks like the probability of a full-blown trade war between the world’s two largest economies is rising,” said Louis Kuijs, an economist at Oxford Economics.

Tariffs are already raising costs for some goods. A punitive duty the Trump administration applied to lumber imports from Canada has raised the price of a new home by $9,000, according to the National Association of Home Builders.

The White House has not set a date for the imposition of any new tariffs beyond the initial list. The next step will be for the Office of the U.S. Trade Representative to identify the Chinese goods to be penalized and conduct a legal review.

In the first round of penalties announced by both nations, to take effect July 6, the U.S. plans to impose tariffs of 25 per cent on $34 billion of Chinese imports, such as construction machinery, aerospace, and power generation equipment. The White House is finalizing a list of $16 billion in additional goods it will sanction later.

China is retaliating by raising import duties on $34 billion worth of American goods, including soybeans, electric cars and whiskey. And it says it would impose tariffs on $16 billion more if the United States does so.

The tariffs on Chinese imports are the latest in a spate of protectionist measures unveiled by Trump in recent months that included tariffs on steel and aluminum imports to the U.S. and a tough rhetoric on trade negotiations from North America to Asia. The escalation in the dispute with China may also serve as a warning to other trading partners with which Trump has been feuding, including Canada and the European Union.

Wall Street has viewed the escalating trade tensions with concern that they could strangle the economic growth achieved during Trump’s watch. Gary Cohn, Trump’s former top economic adviser, said last week that a “tariff battle” could result in price inflation and consumer debt—“historic ingredients for an economic slowdown.”

In a statement, Trump says he has an “excellent relationship” with Xi, “but the United States will no longer be taken advantage of on trade by China and other countries in the world.”