"It took me two minutes and now the NFL is so happy," said Trump 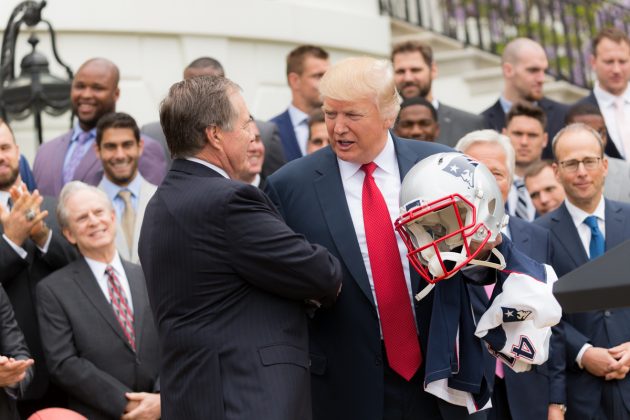 PHOTO: President Trump meeting with the players and staff of New England Patriots at the White House on April 19, 2017 following their Super Bowl LI win over the Atlanta Falcons/The White House

MINNEAPOLIS – U.S. President Donald Trump is taking credit for pushing Canada to allow Canadian ads to be shown during Super Bowl broadcasts as part of the negotiations over the revamped trade agreement among the U.S., Canada and Mexico.

Trump told a rally crowd in Minnesota that he’d heard the NFL had a “big, big problem” and stepped in.

He said, “it took me two minutes and now the NFL is so happy.”

Trump also said he got a call from NFL Commissioner Roger Goodell thanking him for his efforts.

The agreement effectively dismisses a ruling that mandated American ads be shown during Super Bowl broadcasts in Canada. It could boost NFL revenue.

The NFL and Trump have been at odds over players kneeling in protest of police brutality and racial injustice during the national anthem.