Ambassador Kelly Craft said there's no political motivation behind the arrest, yet Canada is left in the unenviable position of being caught between two superpowers 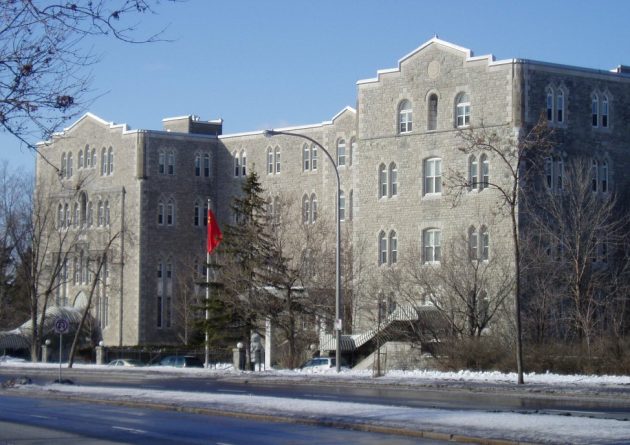 PHOTO: Embassy of the People’s Republic of China in Canada/via Wikimedia Commons

OTTAWA – China’s economic and political rise may be bad news for North American workers but the U.S. pursuit of a Huawei executive is a separate legal matter, says Donald Trump’s envoy to Canada.

Canada detained Meng at the request of the United States when she was passing through Vancouver on Dec. 1. The United States wants Meng to face charges related to possible violations of trade sanctions against Iran.

“It is a very delicate process, and I don’t want to be involved in something that is an ongoing, independent judiciary process. Our law enforcement work very closely together,” Craft told a small group of journalists at her Ottawa residence on Tuesday.

Craft’s view is in lockstep with the Trudeau government, which has repeatedly stressed the role of an independent law-enforcement and legal system in Meng’s case.

The Chinese Embassy in Ottawa has loudly protested Meng’s arrest as a violation of her human rights and Chinese state-controlled media have been fanning the flames against the Canadian action.

“(W)hat’s certain is that Canada cannot fool China with its simple excuse of an independent legal system, and, given China’s strong response and the tempest of public protest it has caused, the move will not bode well for Canada in many aspects,” says a column in the China’s Global Times this week.

Canada now finds itself in the unenviable position of being caught between two superpowers, but China’s pressure will ultimately prove futile, said retired Canadian diplomat Philip Calvert, who held several China-related economic and political posts during his career.

“Canada’s best defence is to scrupulously follow an objective legal process that is divorced from political influence. It is called the rule of law and China could do with more of it,” wrote Calvert, a senior fellow with the China Institute of the University of Alberta, in an op-ed for the Nikkei Asian Review.

Craft went beyond the Meng case on Tuesday. The U.S. wants the Five Eyes intelligence-sharing network that also includes Canada, Australia, Britain and New Zealand to shun Huawei. So far, New Zealand and Australia have banned the company from their 5G networks while Britain has expressed concerns.

Craft reiterated her government’s desire to see its allies keep Huawei products out of their infrastructure, something Canada has yet to do.

Without naming it, Craft referred to Beijing’s ambitious “Belt and Road” investment program as a worrying development. The multibillion-dollar infrastructure project spans continents to create land and sea trade routes connecting China with Europe, Africa and the rest of Asia. It’s been embraced in many countries, including many in the developed world, while richer countries – especially the U.S. – are suspicious of Beijing buying power and influence.

“I think we all should be concerned,” Craft said. “We need to be very cautious and keep our eyes open, just be very concerned about the countries that are affected by China with their infrastructure projects. I think that is something that we’ve all been talking about, all three countries.”

Craft said the infrastructure inroads that China has made in Africa, lending money for massive projects like ports and railways built by Chinese contractors, will leave many countries indebted and will deprive young, upwardly mobile Africans of opportunities.

“So, therefore it turns into an ownership situation. And it’s really displacing the generation of workers that are college-educated and that need careers because they (China) are bringing in their own workers. So that’s just displacing that generation.”

Craft made clear the implications of China’s rise were a big topic around the bargaining tables during the renegotiation of the North American Free Trade Agreement.

The ambassador said her government insisted on inserting a new provision into the U.S.-Mexico-Canada Agreement to strengthen North America’s economy against non-market economies. The controversial new clause calls on all three North American partners to notify each other if they engage in free-trade talks with a non-market economy, widely understood to mean China.

Craft said the new NAFTA also has strengthened e-commerce provisions that will protect the continent’s intellectual property and biotechnology from the Chinese theft.

“I can’t speak for your government but I can certainly speak for the fact that during USMCA it was a topic that we discussed very openly at the table – intellectual property, cybersecurity,” she said.

Craft said her government’s top priority is to ensure all three countries ratify the United States-Mexico-Canada Agreement in the new year.

She said the recent signing of the deal by the three North American leaders was interpreted as a sign of goodwill following the “harsher tone” earlier in the year.

Craft steered clear of mentioning the spat that erupted between Canada and the U.S. when President Donald Trump tweeted insults at Prime Minister Justin Trudeau after leaving a G7 meeting in Quebec in June. She attributed some of the acrimony to the heat of the negotiations and her president’s own personal style, which has been consistent since he entered politics.

During a trade negotiation, “you’re not worried about niceties,” she said, but added that “the president is very fond of Justin Trudeau.”

The Kentucky-born Craft also made clear that she brings her own personality to the job of representing Trump in Canada.

“All that I can do is maintain the person that I am,” Craft explained. “I would hope that people, when dealing with me, would see, maybe, a different genteelness.”