At a conference, Phil Scott and Philippe Couillard signed a joint declaration stating the two jurisdictions would work together to strengthen economic ties. Quebec is Vermont's number one international trading partner 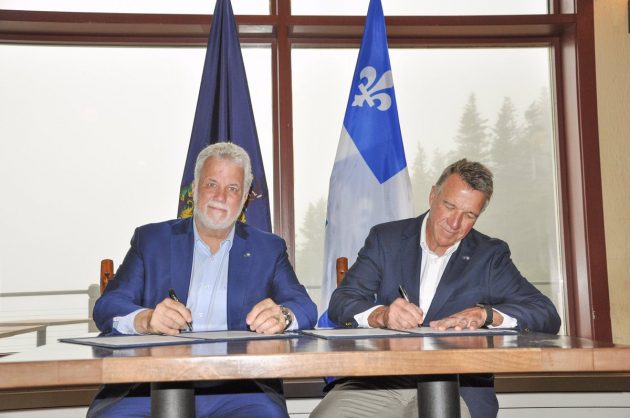 MOUNT MANSFIELD, Vt.—After a short gondola ride together through thick fog and rain clouds up Mount Mansfield on Sunday, Quebec Premier Philippe Couillard and Vermont Gov. Phil Scott spoke warmly about the importance of trade between their two countries.

But despite the beautiful landscape at the Stowe Mountain Resort and the smiles and handshakes, United States President Donald Trump’s trade policies and tone toward Canada loomed large over the gathering.

Scott and Couillard signed a joint declaration stating the two jurisdictions would work together to strengthen economic ties, but they couldn’t escape questions about the ongoing trade dispute between the two countries.

“I would say that Mr. Trump—our president—has in the past has made many comments that I believe are disrespectful and maybe that’s his negotiating tactic, but it isn’t one that I would use,” he said.

Quebec is Vermont’s number 1 international trading partner and about 17,000 jobs in the state depend on trade with Canada.

Sunday’s meeting between Couillard and Scott was held as part of the two-day, annual conference between governors of the New England states and premiers of Quebec and the eastern Canadian provinces.

Scott said it’s important for leaders of individual states and provinces to meet and sign deals that go beyond the politics of the day.

“I wouldn’t say the tone out of Washington and the president is necessarily all targeted towards Canada—I’ve seen it in other areas,” he said. “Even within his own country he does the same.

“And that’s why it’s so important for us to have these types of events. We may not be able to control … what the president says, but we can control what we say and do.”

The U.S. and Mexico are conducting bilateral negotiations on NAFTA, and Canada hasn’t returned to the table this summer.

Trump slapped Canada and other allies with steel and aluminum duties, which led to retaliatory levies from Ottawa. He has also made repeated threats to apply far more damaging tariffs on the deeply integrated automotive sector.

The U.S. president has repeatedly said Canada’s supply management system, which controls the price and volume of products such as dairy and poultry in the country, is an obstacle to signing a new deal.

Couillard said the U.S. helps its farmers with budget allocations and other measures, and Canada has its own ways to support its agricultural sector.

“With NAFTA, the vast majority of trade is tariff-free,” Couillard said. “Instead of concentrating on the few areas that still have tariffs, we should appreciate the fact NAFTA makes it possible to be tariff-free with most of our trade, and not damage that and add to the difficulties.”

Both leaders will soon be heading to the campaign trail.

Couillard is behind in the polls as the Quebec provincial campaign is set to begin Aug. 23, while Scott is facing a primary challenge ahead of the Nov. 6 election.

The conference continues on Monday with seminars and events that are scheduled to include New Brunswick Premier Brian Gallant, Newfoundland and Labrador’s Dwight Ball and Prince Edward Island’s Wade MacLauchlan.