Amid criticism of the country's increasingly protectionist stance, the U.S. president declared America remains open for business under his leadership 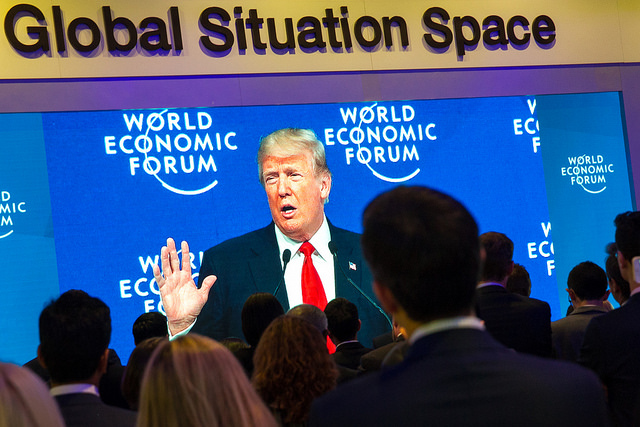 Trump is under fire on numerous fronts on both foreign and domestic policy. PHOTO: World Economic Forum/Sandra Blaser

Facing a wary gathering of global political and business leaders at the Swiss summit, he also tried to assure his audience that economic growth taking place in the U.S. under his “America first” agenda benefits the rest of the world.

“America First does not mean America alone,” Trump said, while also laying out a harder line on trade disputes by saying the U.S. will “enforce our trade laws and restore integrity to the trading system” to “create a system that works not just for the United States but for all nations.”

Trump was the first sitting president to attend Davos since Bill Clinton in 2000.

He used the speech to highlight the administration’s recent overhaul of the U.S. tax system and expressed a willingness a negotiate both bilateral and multilateral trade deals—something he’s shown a resilience to do previously.

As one of his first actions last year, Trump directed his trade representative to withdraw from the sweeping Trans-Pacific Partnership that at the time involved the U.S. and 11 other Pacific Rim nations. The remaining countries, including Canada, struck a deal to sign a revamped deal without the U.S. just this week.

Trump now says he is open to talks with individual TPP countries or the group itself.

He also held talks with the leaders of Britain, Israel, Switzerland and Rwanda during the summit, and had dinner with European business executives in the interest of encouraging them to invest in the U.S.

While interest in the president’s remarks ahead of the speech was keen, the moment was partially overshadowed by a report in The New York Times that he had ordered the firing of special counsel Robert Mueller last June, but backed off after White House lawyer Don McGahn threatened to resign.

Next week, Trump will deliver his first State of the Union address to the American public.