In an abrupt reversal with major trade implications, the U.S. president said he will not label China a currency manipulator

April 13, 2017  by Matthew Pennington And Martin Crutsinger, The Associated Press 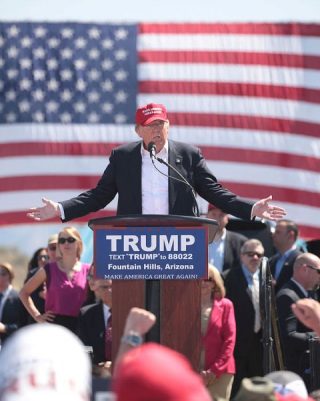 WASHINGTON—The United States and China have struck what appears to be an unusual bargain as President Donald Trump says he won’t label Beijing a currency manipulator and voices confidence Chinese President Xi Jinping will help him deal with North Korea’s mounting threat.

Another result of the diplomatic wrangling: a surprising Chinese abstention on a U.N. resolution condemning a Syrian chemical weapons attack.

In a newspaper interview and a White House news conference April 12, Trump hailed the rapport he developed with Xi during last week’s Florida summit, which seems to have yielded an immediate easing of tensions related to the U.S.-Chinese trade imbalance and efforts to prevent Pyongyang from developing a nuclear missile capable of reaching the United States.

“I think he wants to help us with North Korea,” Trump said of Xi, crediting China in the White House news conference with taking a “big step” by turning back boats of coal that North Korea sells to its northern neighbour. North Korea conducts some 90 per cent of its trade with China.

And in one of the sharpest reverses of his presidency, Trump backed off from a campaign pledge by saying he would not declare China to be a currency manipulator, an action that could have led to higher tariffs on Chinese goods. The accusation had formed a basis of Trump’s argument for lost American jobs, on the grounds that an undervalued currency was boosting Chinese exports and leading to artificially low prices, all at U.S. manufacturers’ expense.

“They’re not currency manipulators,” Trump told The Wall Street Journal earlier Wednesday, saying the country hadn’t been cheating on its currency for months. He said a U.S. declaration of Chinese manipulation could jeopardize talks with China on North Korea.

It’s rare for American leaders to link trade or currency disputes to broader international security efforts against countries such as North Korea. Trump’s predecessors had largely kept such disputes separate.

“It is true that China is not a currency manipulator,” Lu Kang, a spokesman for the Chinese Ministry of Foreign Affairs, said in a statement Thursday. “On the issue of RMB (renminbi) exchange rate, our position is consistent and clear, we will press ahead with the reform of the formation regime of our RMB exchange rate and we will maintain the stability of the RMB at an adaptive and equilibrium level.”

Trump also repeated that trade concessions could be on the table for more co-operation on North Korea. He said he told Xi last week: “The way you’re going to make a good trade deal is to help us with North Korea, otherwise we’re just going to go it alone. That will be all right, too. But going it alone means going it with lots of other nations.”’

Trump’s upbeat assessment of the relations with China contrasted with blunt talk about ties with Russia, a country with which he had repeatedly vowed to start a new partnership. Trump told reporters the U.S.-Russian relationship has reached an “all-time low” amid differences over Syria.

On North Korea, Trump didn’t outline any concessions China was offering apart from the coal cutoff, which was announced two months ago.

The United States has been urging Beijing to use its economic leverage with North Korea, which conducted two underground nuclear explosions and two dozen missile tests last year. It is moving closer to developing a nuclear-tipped missile that could threaten the U.S. mainland.

Bonnie Glaser, a China expert at the Center for Strategic and International Studies, said the development “bodes well for co-operation between the U.S. and China.”

“It will be interesting to see what measures China takes to ramp up pressure on North Korea,” she said. “That is the real litmus test.”

Officials at Treasury, the agency that is responsible for issuing currency reports every six months, confirmed that China won’t be named a currency manipulator. The next report is supposed to come out this week.

Some Democrats had supported Trump’s earlier position on China.

“The best way to get China to co-operate with North Korea is to be tough on them with trade, which is the No. 1 thing China’s government cares about,” Senate Democratic Leader Charles Schumer of New York said. “When the president fails to label them a currency manipulator, he gives them a green light to steal our jobs and wealth time and time again.”

In his interview with the Journal, Trump also said he would prefer that the Federal Reserve keep interest rates relatively low. And he left open the possibility of re-nominating Janet Yellen for a second four-year term as Fed chair. That would mark another shift from his campaign position that he would probably replace Yellen when her term as chair ends in February next year.