Trump and the G7: Stakes to stay high for Trudeau Liberals during key stretch

After the U.S. imposed metal tariffs on Canada, and subsequent Canadian countermeasures, the cross-border relationship has become increasingly complicated. Trump's first official visit to Canada this weekend could be a tense one 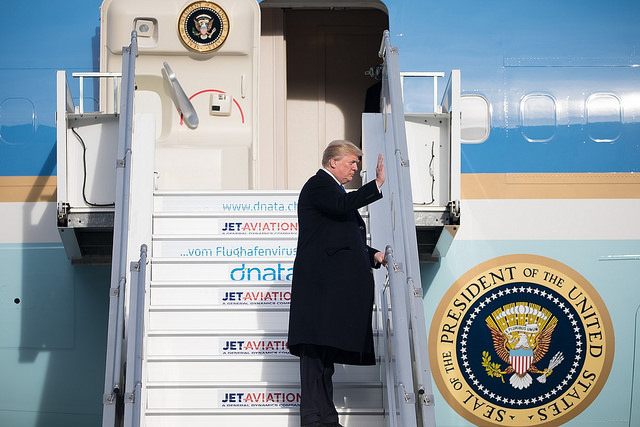 WHISTLER, B.C.—As one week packed with major economic and political developments comes to a close, another begins for the Trudeau government.

Over a span of just a few days, the Liberals announced a plan to potentially spend $4.5 billion to buy a controversial pipeline, watched the chances of a quick NAFTA renegotiation sputter and joined other G7 allies in moving closer to a punishing tariff war with the United States.

The political stakes are high. When Canadians go to the polls next year, the significant events of this tight time window could weigh heavily on their decisions at the ballot box.

In the coming week, Prime Minister Justin Trudeau will also have to navigate an increasingly complex relationship with U.S. President Donald Trump when Canada hosts the G7 leaders’ summit. It will mark Trump’s first official visit to Canada as president.

Trump’s presence at the summit could produce fireworks after Washington angered the rest of the alliance by imposing hefty steel and aluminum tariffs last week. The G7 leaders have also exchanged tough words over the issue, with Trudeau saying Sunday that calling Canada a national security threat to the United States is “quite frankly insulting.”

When asked about the significance of the past week for the Liberals’ future electoral prospects, Finance Minister Bill Morneau said in an interview that the government believes it got elected because people wanted it to make decisions to help Canadians feel more successful.

“What we’ve shown this week is that when faced with challenges that were going to not be in Canadians’ best interests, that we’ll take action,” said Morneau, the point person for Trudeau on many of these major files.

“I think Canadians will judge us based on our actions and I think those actions are clearly intended to defend Canadians’ economic interests.”

Morneau spoke to The Canadian Press shortly after the highly unusual conclusion Saturday of the G7 finance ministers’ meeting in the British Columbia resort town of Whistler.

The club of developed nations used the “chair’s summary” of the event to deliver a rare public rebuke of one of their own allies, with a joint condemnation of Trump’s decision to apply the steel and aluminum tariffs.

In response to the U.S. move, Canada and the European Union have threatened to retaliate with tariffs of their own, prompting France’s finance minister to say the “tense and tough” Whistler meetings were much more of a “G6 plus one” than a G7.

Trump used national security concerns to justify imposing tariffs, which Morneau has called “absurd.” Morneau also warns the tariff fight will destroy jobs in Canada and the U.S., and drive up consumer prices.

“We need to demonstrate that as a sovereign nation we’re in charge of our affairs and we can’t accept that someone damages our economy for reasons that make no sense,” said Morneau, who insisted he doesn’t know the American motivation behind the tariffs.

“What we had to say is that when one of our allies is an outlier, we need to point it out and we need to be really clear. And in this case, on trade, the United States is an outlier. They’re saying something that we believe is patently untrue.”

On the government’s contentious plan to buy the Trans Mountain pipeline, Morneau expects Canadians will see it as a “bold decision,” but a necessary one because he argues no private sector firm would’ve been able to solve the issue.

Morneau has said Ottawa is buying the project from Kinder Morgan Canada in order to help the expansion overcome political risks. He’s stressed it will allow Canada to find new export markets for its oil resources, with the long-term goal of finding a private-sector buyer to take over the pipeline.

B.C. Premier John Horgan has gone to court to fight the project. He has said his concerns are rooted in what he’s called the limited scientific knowledge of how diluted bitumen behaves in water. Horgan has also pointed to perceived gaps in prevention efforts and response plans in the event of a spill.

The Liberal government is also expected to face many protests over Trans Mountain, following the outrage that has greeted its pipeline plan so far.

With all of this happening, an intense rush of NAFTA talks failed to generate a new agreement.

Late last week, Canadian government insiders said any hope of a quick deal on a renegotiated North American Free Trade Agreement was wrecked by Trump’s decision to end Canada and Mexico’s exemption from the steel and aluminum tariffs.

One well-placed, senior official said the chances of striking any deal on NAFTA, ever, had “fallen through the floor.”

On Friday, Trump also revived an idea he’s floated before: negotiating separate bilateral trade pacts with Canada and Mexico if no deal can be reached on NAFTA.

Morneau, however, insists NAFTA and the tariffs are separate issues, because the U.S. applied the duties under the guise that Canada is a security risk.

“We’re clearly not a security risk, so I see it as an isolated issue for us to talk about and agree that they should move forward and take these tariffs off,” he said.

“We can see a path towards improving NAFTA, one that can be reasonably considered by all three countries.”