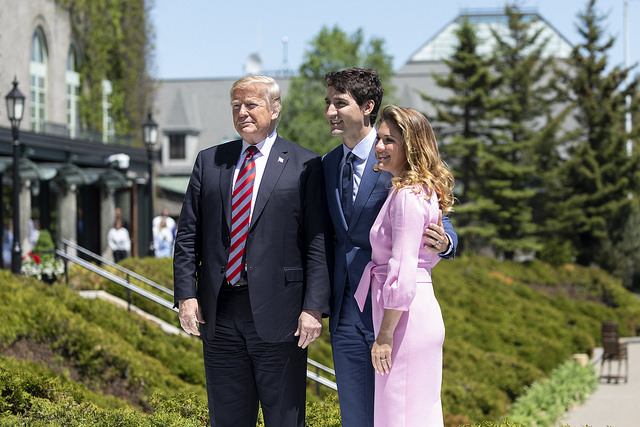 The warm meeting at the G7 summit over the weekend was short-lived. PHOTO: The White House/Flickr

OTTAWA—Donald Trump’s trade adviser is apologizing for saying there’s a “special place in hell” for Prime Minister Justin Trudeau because of his “bad-faith diplomacy” during the G7 summit in Quebec.

Peter Navarro says his job was to send a “signal of strength” after Trudeau’s post-G7 news conference sent the U.S. president into a fit of pique that threw the summit into disarray.

However, Navarro says he used inappropriate language in trying to convey that message.

He made the apology—something that former U.S. ambassador to Canada Bruce Heyman, among others, was demanding that he do—during a Wall Street Journal event today in Washington.

Earlier, Trump elaborated on his abrupt Twitter outburst as he departed the summit Saturday, telling a news conference in Singapore that Trudeau’s assertion that Canada “will not be pushed around” would end up costing Canadians “a lot of money.”

Earlier today, Trudeau cheered Trump’s bid to broker a deal to rid the Korean Peninsula of nuclear weapons, but he stayed mum on the U.S. administration’s persistent trash talk.

Navarro, for his part, suggested that he was following orders—but made a poor choice of words in doing so.

“My job was to send a signal of strength,” he said. “The problem was that in conveying that message I used language that was inappropriate.

“I own that, that was my mistake, those were my words.”

Trudeau said the Liberal government looks forward to the details of the agreement that emerged from Monday’s historic meeting between Trump and North Korean leader Kim Jong Un.

“We support the continuing efforts by the president on North Korea, (and) we look forward to looking at the details of the agreement,” Trudeau said.

Trump took to Twitter aboard Air Force 1 on Saturday to call Trudeau “dishonest” and “weak” after seeing Trudeau’s G7 news conference, when the prime minister said he had pushed back against the Trump administration’s hefty tariffs on steel and aluminum.

Trump says he watched that news conference on his way to Singapore, and was upset because he thought he and Trudeau had had a positive meeting in Charlevoix.

“I see the television and he’s giving a news conference about how he ‘will not be pushed around’ by the United States. And I say, ‘Push him around? We just shook hands!”’ Trump said.

“We finished the (G7) meeting and really everybody was happy.”

Trump has consistently railed against what he claims are unfair trade practices by some of America’s biggest trade partners, including Canada—in particular Canada’s supply management system, which levels tariffs of up to 300 per cent on imported dairy products.

On Monday, MPs in the House of Commons approved a motion denouncing Trump’s name-calling tirade and endorsing Trudeau’s decision to stand his ground against U.S. tariffs and tweeted presidential threats.

The motion calls on the House to recognize the importance of Canada’s “long-standing, mutually beneficial trading relationship” with the U.S., “strongly oppose” the “illegitimate tariffs” imposed on steel and aluminum, stand “in solidarity” with the Trudeau government’s decision to impose retaliatory tariffs and remain united in support of the supply management system of regulating Canada’s dairy and poultry industry.

And it concludes with a direct shot at Trump, calling on the House to “reject disparaging and ad hominem statements by U.S. officials which do a disservice to bilateral relations and work against efforts to resolve this trade dispute.”

Former Conservative cabinet minister James Moore, a member of the government’s advisory group on NAFTA, hailed Trudeau’s approach, refusing to react to “the noise, the bluster, the Twitter, the emotional outbursts.”

Ambrose said the government needs to consider what more it’s willing to put on the NAFTA table, keeping in mind that “what’s at stake is just so much bigger than our pride. This is about our economy and millions and millions of jobs.”

As well, she said the government should accelerate work on its Plan B in the event that Trump blows up NAFTA or follows through on threats to impose tariffs on autos and auto parts—a move Ambrose said would be devastating to Canada’s economy. Among other things, she said the government should be preparing to keep pace with corporate tax cuts and tax breaks south of the border.

The United States has imposed 25 per cent tariffs on steel from Canada, Mexico and the European Union, and 10 per cent tariffs on aluminum. The Trudeau government has announced it will impose dollar-for-dollar, retaliatory tariffs on metals and a range of other U.S. products by July 1.

NDP Leader Jagmeet Singh urged the federal government to get serious about drafting a rescue plan for steel and aluminum workers, who are going to feel the brunt of the initial impact of the dispute—and soon.

“We’ve got to look at what supports are available to ensure that if their jobs, their livelihoods are compromised, what can the government do to support these folks.”