Speaking at a Houston energy conference, the Prime Minister said a border levy would hurt both economies 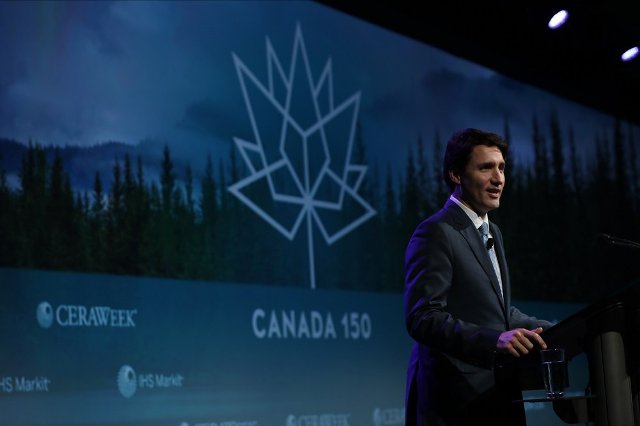 HOUSTON—Prime Minister Justin Trudeau made it clear he is flatly against a proposed U.S. border adjustment tax, telling a global gathering of politicians and energy sector executives it would hurt the economy in both countries.

“Recognizing, of course, how much the Canadian economy depends on close collaboration and integration with the American economy, anything that creates impediments at the border—extra tariffs or new taxes—is something we’re concerned with,” Trudeau said March 9 in Houston, Texas.

Trudeau came to the heart of the U.S. oil path to deliver a keynote address to the annual CERAWeek conference—a first for a Canadian prime minister—that attracts legislators, energy executives, innovators and experts from around the world.

His comments on the importance of avoiding a levy at the border—as proposed by Republican leadership in the U.S.—came in a question-and-answer session following a speech where Trudeau make the case for investing in Canadian natural resources, even while his Liberal government is preparing for a future without fossil fuels.

“Nothing is more essential to the U.S. economy than access to a secure, reliable source of energy,” Trudeau said during his speech. “Canada is that source.”

Trudeau talked up the connection between resource development and taking care of the environment, a message he has also been taking to Canadians.

Trudeau has been trying to convince skeptics on both sides of the political spectrum that the country needs both new pipelines and a carbon-pricing plan meant to cut back on greenhouse gas emissions.

The conference, organized by London-based research firm IHS Markit, also gave Trudeau an award for his stance in favour of sustainable development.

“I make no bones about it: We’re proud of this. It’s progress. It’s important,” said Trudeau.

But he argued that other things are important too.

“Let me be very clear: We could not have moved on pipelines had we not acted on climate,” Trudeau said.

The visit comes at a time when the energy industry, buoyed by a recent resurgence in the price of oil, and governments around the world are grappling with a dramatic shift in American politics.

Trump has vowed to boost fossil fuel production through easing regulations. That stance, and his tough-on-trade approach could challenge Trudeau’s vision for a clean-energy future.

Trudeau did not openly criticize Trump, but there were a few moments during his time on stage Thursday night where he pointedly praised the Canadian way of doing things—particularly when it comes to immigration—in a way that allowed his audience to read between the lines.

“Our capacity as a country to recognize that diversity is an incredible source of strength . . . and not a weakness, is one of those things I certainly hope that people notice and try and emulate around the world,” Trudeau said during the question-and-answer session.

“Because we need a little more of that,” he said before pausing to look directly into the audience.

The Conservatives have been highly critical of the Liberal plan to require all provinces and territories to have some form of carbon pricing in place by 2018, suggesting that is frightening foreign investors away.

The move shows that at a time of lower crude prices, and the quick growth of less costly shale oil, foreign companies are taking another look at their investments in the costly and carbon-intensive Alberta oilsands.

Trudeau’s visit is part of ongoing Liberal government efforts to convince the Trump administration and other American legislators that keeping an open border benefits the economy—including the energy sector—in both Canada and the U.S.

On Friday, the prime minister is scheduled to meet with Greg Abbott, the governor of Texas, and Lisa Murkowski, the U.S. senator for Alaska. Both are Republicans. David MacNaughton, Canada’s U.S. ambassador and a key player in the government’s outreach efforts, is also part of Trudeau’s entourage in Houston.

Natural Resources Minister Jim Carr, who has been in Houston all week, said the federal government believes that, in the long run, investors will see the Canadian oil and gas industry as a good place to put their money as they transition to renewable energy.

“There will be other investors who see Canada, known for its innovation and its entrepreneurship, as a place where investment makes a lot of sense,” Carr told reporters Thursday evening.